A recent poll on Vermont’s voting preferences reveals a range of attitudes that run counter to election policies in the state — most notably, voters overwhelmingly think an ID should be required for casting a vote, and more than half say election officials can’t verify who is filling out absentee ballots.

The interactive voice response poll, conducted March 23, asked individuals on Vermont’s registered voter list to answer a series of questions about voting polices in the state. Eighty three percent of respondents said they “definitely” will be voting in the November election, and another 5 percent said they “probably” will do so.

When asked if some form of ID should be presented in order to vote, 71 percent of Vermonters said yes. Nine percent said they were not sure, and 20 percent said no. Vermont does not currently require voter ID. 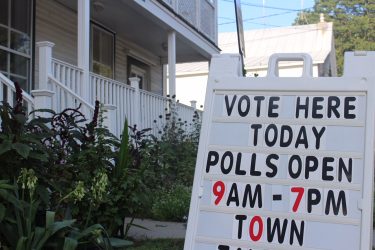 ELECTION INTEGRITY IN DOUBT: Vermonters are split over whether voter fraud is a major issue for the state, but more than 70 percent think some type of voter ID should be required to vote.

The poll also found that voters lack confidence in absentee voting. Fifty-three percent of respondents said officials don’t have the ability to verify the identity of persons filling out absentee ballots. Less than three in 10 thought election officials can know who is filling them out, and 20 percent said they weren’t sure.

Also on absentee voting, 41 percent of Vermonters think using absentee ballots increases the likelihood of election fraud. Thirty-three percent said it does not, and another 11 percent are not sure.

Another reveal of the poll is that 46 percent of Vermonters have concerns about allowing same-day voter registration, a policy in Vermont. Forty percent did not find the practice concerning.

When it comes to letting college students vote, 55 percent of respondents said students from out of state should demonstrate an intention to become a permanent resident to be allowed to vote.

On Vermont’s 45 day early voting period, exactly a third of voters, 33 percent, think the period is too long. Forty-seven percent said it was just right.

Asked how much of an issue it is to not purge the voter checklists soon after a voter dies or moves away, 53 percent said it’s a significant problem. Another 31 percent responded that they don’t see it as a serious problem.

High-profile ballot-tampering cases have been widely reported in the past election. In North Carolina, the discovery of ballot tampering in a congressional election caused an election to be overturned. Political operatives in the case were charged with illegal possession of absentee ballots, perjury, and conspiracy to obstruct justice.

America’s trust in voting by mail is increasingly important this year as election officials in various states are considering by-mail-only elections as a way to prevent the spread of COVID-19.

“In terms of the elections, I think that we’ll probably be moving to vote by mail,” Speaker of the House Nancy Pelosi recently said on MSNBC.

In Kansas, the state legislature successfully changed the law to have mail-in-voting only for the state’s May 2 presidential primary.

“Our 2020 elections will rely on a significant increase in by-mail voting. Whether that means having a ballot sent to every registered voter or pushing a much greater number of voters to request a ballot by mail through our existing election procedures, we will need to take the steps necessary to heavily reduce in-person voting at the polls on Election Day,” Condos wrote in an op-ed earlier this month.

The poll was conducted by Imperium Advisors via telephone. The questions were presented in multiple-choice format. In all, there were 374 respondents to the survey. The margin of error is plus or minus 5 percent.