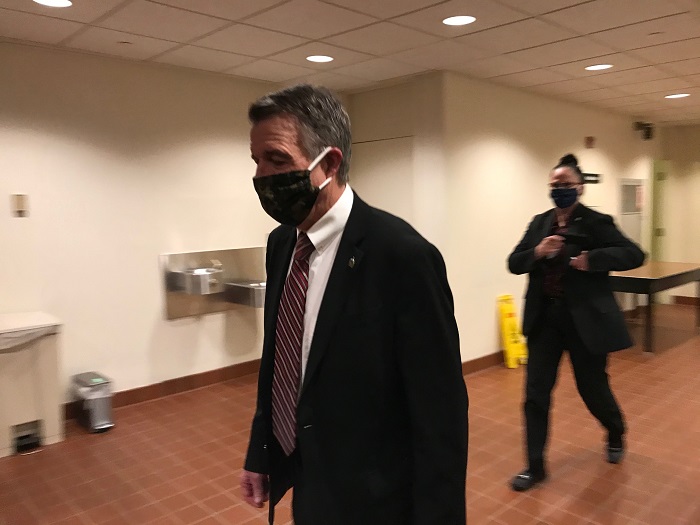 IN A MASK: Gov. Phil Scott was in Montpelier today for another coronavirus status update. He can now regularly be seen wearing a face mask.

MONTPELIER — Gov. Phil Scott on Friday extended the state of emergency and all current coronavirus mitigation orders for Vermont until May 15, but said he will soon begin opening certain business sectors on a weekly basis to get people back to work.

Taking questions from reporters during his 11 a.m. press conference, Scott offered a general summary of his plan to open non-essential businesses before May 15, saying it will be “a phased-in approach” in the weeks ahead.

“Yes, I do believe there’s an opportunity to do that,” he said. “We’ll be announcing some of those on a weekly basis as we receive the information, if we continue to move in a positive direction as we’re doing right now. We will begin opening that up to certain sectors.”

Scott said while he wasn’t ready to announce openings at the Friday briefing, it is his administration’s intention to get people back to work as the data about the containment of the virus continues along its improved course.

“If we can continue to see and have confidence that it’s leveled out, plateaued, and then starts declining, that’s when we start opening the spigot, as I said, a quarter turn at a time,” he said.

The Republican governor has been under pressure to address the state’s economy. The number of Vermonters now out of work due to state-mandated restrictions has spiked to more than 70,000 over a three-week period. According to Department of Labor Commissioner Michael Harrington, department staff are receiving between 1,500 and 3,000 jobless claims per day. A secondary call center is being set up and staffed with as many as 30 people to respond to the flood of new unemployment insurance claims. To date, the department has issued 30,000 benefit payments in the amount of $23.3 million.

Department of Financial Regulation Commissioner Michael Pieciak, who also spoke at the media briefing, emphasized that newly released modeling for the progression of coronavirus cases and deaths looks much better than originally anticipated. As of Friday, the number of COVID-19 related deaths reached 24; the state forecasts between 44 and 100 deaths will occur from the pandemic.

“We continue to follow a positive trend that is below both our worst and even our best-case scenarios as of late March,” Peiciak said. “The data now more clearly points to the fact that the sacrifices Vermonters are making and continue to make are positively impacting our COVID-19 experience.”

He added, however, that thousands of Vermonters will likely catch the virus over the next six weeks.

“Our recent forecast indicates we are trending toward a milder experience during April than was initially anticipated with the new confirmed cases still expected to peak over the next two to four weeks,” he said. “I must make clear, however, that although we are anticipating a milder experience in April, our current forecasts still indicate that more than 1,000 to 5,000 Vermonters will be diagnosed with COVID-19 by the end of May, with hundreds requiring hospital care.”

The modeling includes other positive news. The state forecasts a need for between 90 and 233 beds, which is safely below the current capacity of 420 beds. Intensive care unit beds are predicted to peak at between 34 and 96, well within the surge capacity range of 117. The projected need for between 19 and 52 ventilators is also within capacity.

While the extension announced Friday continues the status quo of recent mitigation measures, several changes have been made. The House and Senate Transportation Committees have asked that the Department of Motor Vehicles extend the deadline for motor vehicle inspections due in April for up to 60 days. Also, lodging operators can begin immediately to accept reservations for guests and events that occur on June 15 or later.

The Agency of Commerce and Community Development (ACCD) has been directed to update the guidance policies for real estate sales, including sales that are done directly by the property owner. The ACCD also will clarify that financial, legal, municipalities, and other professional services are all allowed to help Vermonters to collect state and federal financial aid.

Lastly, it clarifies that there be protections for healthcare facilities, workers, and volunteers as granted under 20 V.S.A. § 20 when they are working on COVID-19 related services.

Asked by True North if low death and hospitalization rates might allow a targeted approach of mandating social distancing for vulnerable populations while allowing the rest of Vermonters to get back to work, both Scott and Health Commissioner Mark Levine said it’s not being considered.

“This is transmitted whether you’re 15 or 75, it doesn’t matter your age,” Scott said. “It’s just that you’re more vulnerable with chronic conditions and having an adverse effect as a result of contracting coronavirus. So, all of us have a role to play in this — all age groups. To concentrate on one sector [of the population] just wouldn’t be beneficial.”

“Though we’ve targeted a certain group as being the most vulnerable, if you have widespread disease in the population, people who don’t fall in the older, chronically ill vulnerable group will get very ill, just statistically speaking. So the strategy is population-wide. It can’t really be targeted in an effective way.”

Levine said earlier in the meeting that his strategy is to get the population into a deceleration phase, or an “era of suppression” of the virus. During suppression, there will be few actively infected people in the community, allowing for “a strategy of containment,” in which health professionals isolate and quarantine infected persons as needed.

He said there will likely be another occurrence of the virus, but it should not be of a large magnitude. Levine also suggested that warm weather during summer may have a helpful impact, and noted that that goal of the “stay home, stay safe” order has been primarily to prevent hospitals from getting overwhelmed.

33 thoughts on “Scott extends ‘stay home’ orders to May 15, will soon begin opening business sectors ‘on a weekly basis’”