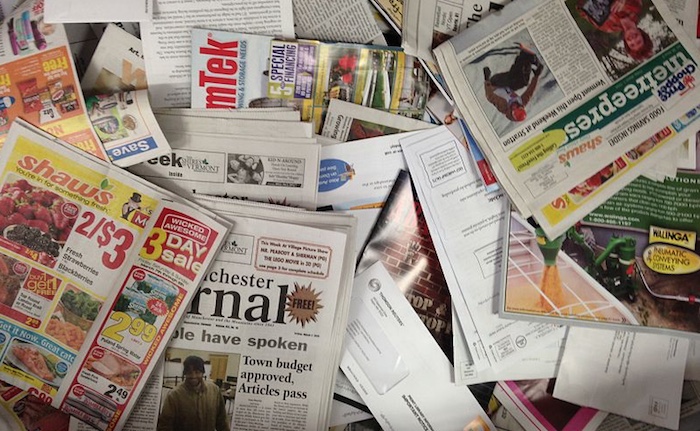 No one knows whether reported cuts in the newspaper industry will last only as long as the state of emergency, or if they will go longer and for some perhaps even become permanent. Newspapers, like many businesses, are in uncharted territory.

With the outbreak peak still yet to come, and the near-term future of the Vermont economy uncertain, already at least one newspaper — the Waterbury Record — has ceased publication, its publisher listing the Covid-19 business slowdown as a factor. Several weekly newspapers have transitioned to online-only in an effort to reduce printing and circulation costs.

Virtually every newspaper that responded to a Vermont Daily inquiry said they have experienced layoffs. Many others that didn’t respond have instead informed their readers directly of staff cutbacks caused by Covid-19. Here’s a brief list, compiled from our inquiry and press reports:

No one knows whether these reported cuts will last only as long as the state of emergency, or if they will go longer and for some perhaps even become permanent. Newspapers, like many businesses, are in uncharted territory.

Seemingly almost overnight, the Covid-19 pandemic and the ‘side effects’ of the State-prescribed treatment – closing non-essential businesses and staying home – have plunged many Vermont newspapers into a sea of red ink. Virtually all newspapers rely on advertising as its main source of revenue. For community newspapers, that means the local pizza parlor, the convenience store on Main Street, hair salons, the diners, the local gym, restaurants and other local service businesses catering to their readers.

Many of these Mom ‘n Pop bellwether businesses have been forced to close their doors outright. Others hang on with curbside service and deliveries, but their revenue is down. Furthermore the big spring holidays – Easter, Mother’s Day, Memorial Day – usually see a ramp-up in advertising as families gather in restaurants and homes to celebrate. There will be no big ads urging families to enjoy the traditional Easter brunch at the local restaurant.

The advertising news isn’t all bad. Help Wanted ads are actually up for some businesses – the April 1 World, a Washington County weekly, ran a full page, back page ad for Capital Candy looking for non-CDL drivers and night warehouse workers. Businesses are communicating new hours, new modes of service, and ongoing commitment to serving their customers. Non-profits and government are chiming in with Covid-19-related ads. The April 1 World even published its annual Easter Church Directory – with every service meeting online. One church, St. Monica in Barre, reminded readers of suspension of Masses during the emergency.

Both paid and free newspapers rely heavily on newsstand circulation. With many stores, malls, libraries and shops now closed, the number of outlets has declined. Furthermore the foot traffic through the remaining outlets has declined under the “stay home, stay safe” decree.

Subscriptions remain, as does online news. A few newspapers have robust US mail subscription lists, but mailing has become increasingly expensive in recent years. Carrier delivery, for those newspapers still employing them, at present seems relatively unaffected by the emergency.

Online news platforms have never been huge profit centers, and are perhaps even less so now. Daily newspapers like the Valley News, Brattleboro Reformer, and Bennington Banner traditionally have held local reporting behind paywalls. Now the paywall has been removed for Covid-19 coverage – in part because readers have far less access to the actual newspaper. That’s great for the readers, but at least in the short term diminishes the “pay if you want it” value of the paywall.

Like many Vermonters, newspapers are scaling back and hanging on. Those with cash reserves are dipping into them. For those without…..see the Waterbury Record and the Hardwick Gazette.

The fact is that for some prominent community papers, for years cash reserves have been either low or non-existent. Announcing the demise of the Waterbury Record, publisher Greg Popa said it had never been the money-maker among its sister papers, the News & Citizen, Stowe Reporter and several Chittenden County community newspapers.

On the front page of a shockingly thin four page April 1 Hardwick Gazette, a headline announces, “Gazette Exploring Options for Survival.” Editor Ray Small writes: “If the print edition is suspended, the plan would be to resume distribution of its paper version once the economic situation stabilizes, though that is not assured. The paper has lost money for several years.”

The Gazette will continue to publish online, both on Facebook and its own website. It is applying for non-profit status, “to solicit tax-deductible donations in hopes of strengthening its financial position.” Last year the IRS granted non-profit status to the former for-profit Salt Lake Tribune, an apparent change in IRS policy. In Vermont, two of the most successful news organizations are not-for-profits: VTDigger and VPR. Both have developed deep individual contributor lists and receive organizational funding as well.

There’s no doubt community papers like the Gazette (“Independent Local News since 1889”) provide a public service. Where else can you learn that Hardwick Electric reports a spike in Greensboro summer-home electricity consumption, indicating that the “summer people” have returned to remote northern Vermont during the pandemic? The Gazette is the go-to for people wondering how town and local schools are dealing with closings, remote meetings of town government, and changes at the local health center.

Perhaps that’s one reason why Gov. Phil Scott made an unprecedented appeal on Facebook March 29 for Vermonters to support the press. “Like many in business, trusted news organizations are being hit hard by this pandemic. If you can, please consider subscribing to your local paper or contributing to a Vermont news organization. You deserve transparency and the truth, and they work hard to keep you informed. Even as they’re working long hours to keep you informed, many talented reporters and journalists are being let go.”

The World and another mainstay weekly, the Journal-Opinion in Bradford, are hunkering down even as they publish along their tried-and-true model.

“We have always had at least 12,000 copies of our paper picked up every week. We have reduced our circulation to 10,000, so all of them are being picked up,” Deborah Phillips of the World responded to our survey. As for staff, “we have a number of people who are set up to work from home. We have one laid off, and two are half time.” The April 1 World ran a respectable 24 pages.

Reporting the news has changed, too. Government is both more and less accessible, Nuti-de Biasi explains: “More emergency board meetings means less notice. Could be coincidental, but there’s been an uptick in nonpublic sessions. Also, some emails have not been returned and since officials are at home social distancing rather than office, we can’t stop by to pester for a response like we used to. Having said that, the remote meetings means small town government is even more accessible than usual. It’s been great to watch the press briefing from state officials. Haven’t had to ask any questions, but we welcome the access and opportunity.”

The JO editor raises one large, important upside of Covid-19 era media: never have the governor’s press conferences been more accessible to statewide, community media. In the past virtually all questions were asked by the physically-present State House press corps: reporters from WCAX, WPTZ, AP, VPR, VT Digger, Seven Days and occasionally others. Now however the questions also are coming fast and furious by phone from the County Courier (Enosburg), the Chester Telegraph, the Newport Daily Express, and other “provincial” news outlets.

The State House press corps itself has adapted to the new normal of socially-distanced legislation. Due to the need to keep safe distances, only a handful of reporters were allowed inside the State House during the last meetings of the House and Senate. Photos were taken by ‘pool photographers’ from Seven Days and VT Digger, who then provided them free of charge to any interested media.

“Fortunately, the virus doesn’t appear to live long on porous surfaces such as newsprint. There hasn’t been a single reported case of someone getting sick from a newspaper, magazine, letter or package delivery,” Routly wrote – adding that Seven Days circulation drivers wear gloves when delivering the paper and practice social distancing.

Broadcast and online media of course face no such in-person contact challenges, although they too rely on advertising or its not-for-profit look-alike cousin, “underwriting.” One big winner in exposure seems to be Front Porch Forum, with its emphasis on linking neighbor to neighbor. FPF has relaxed its restrictions on legislators writing columns to inform their constituents. That’s why Berlin/Northfield Rep. Anne Donahue’s outstanding analysis of the Mitzi Johnson/Cynthia Browning brouhaha first appeared to her constituents in an FPF column. It was then republished in Vermont Daily and several other publications.

Some radio call-in shows have seen more listener interest, because the news is so important and because people are stuck at home. Mike Cameron of WSYB reported to our survey that audience increase – especially among new callers – has been “dramatic.” And like the JO editor on the other side of the state, Cameron sees pros and cons with remote government:

“Some see this as the right move for the future. It’s a slippery slope and up close and personal representation can get lost in a kind of odd game show format. People want personal physical leadership In my view. This is an Ok stop-gap-measure for now. Perhaps more on that later. It is too early to tell even if this is working. Very New and Very Different. The Voters will let them know how they feel.”

Bob Frenier of the Facebook news program Real Vermont News reports that his program — just a year or two old — has surpassed a million views. A recent episode on political party ‘fake bookkeeping’ got 104,000 views, he said last week.

And finally, some Vermont journalists report feeling in their private lives the same stresses being felt by thousands of other Vermonters, like the shock of suddenly having children at home and supervising their education. Jane Lindholm, host of the noontime VPR talk show “Vermont Edition” tweeted recently: “Had a familiar anxiety dream that I haven’t had in years: I haven’t been to class all semester, can’t catch up, about to fail. Woke up and realized it wasn’t about my schooling, it was about the fact that I’m already falling behind in homeschooling my kindergartener!!”

Will Vermont newspapers wake up in a few months and heave a sigh or relief that the nightmare of Covid-19-related poverty is over? Or will some of them simply never wake up? As with so much about this crisis, it’s just too early to tell.

But when it does happen, rest assured some reporter will tell us about it.