Speaking at his weekly press conference, Gov. Phil Scott covered a range of topics, including his thoughts on the seven-fold increase in illegal border crossings at the Vermont-Canadian border.

“I’m always concerned about illegal entry into the state, but we have law enforcement, border patrol, and so forth, and we have a great relationship with them and we are in constant contact with them,” he said.

When Scott was asked if the state might continue to work with the feds to catch illegal entries into Vermont, he said “yes.” 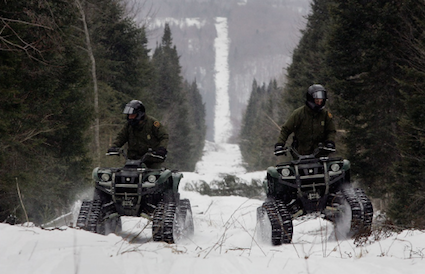 “We’re always concerned when illegal activity is penetrating into the northern borders of Vermont,” she said. “That being said, we are awaiting a briefing from our partners at the Border Patrol to understand a better way to begin to increase our levels of collaboration — which, as I’ve said, we already have an outstanding level of collaboration between several local, county and state entities and our partners along the local border.”

In recent months there has been a 700% increase in illegal border crossings at the Canadian-Vermont border, as well as areas of nearby upstate New York — including some unsuccessful and dangerous attempts that were intercepted by border patrol agents.

The governor said more investments are coming for public housing. He also suggested that lawmakers need to do more to get costs down. “How do we make it less expensive to build this housing so that private companies can get into something that’s lucrative for them and gives us what we need?” Scott said.

About four years ago the Scott administration invested $37 million into public housing, which enabled further investment from the private sector amounting to hundreds of millions. Scott suggested that a strategy to leverage private sector investments could be the way to continue.

“There was a way to provide for decent affordable housing,” the governor said. “… The government got involved and had to utilize the money to jumpstart that.”

Concerning his upcoming State of the State address to occur in January, Scott said he plans to focus on investments in public infrastructure, among other topics.

“We need more workers here in this state and so we need housing to do that. We need water, sewer, and stormwater infrastructure, we need broadband, we need all of those things,” he said.

Healthcare premiums are set to rise again. Policymakers have not been able to come to an agreement on what the hike amount will be as the OneCare board negotiates with Blue Cross/Blue Shield.

“We are going to be encouraging them to get back to the table and try and see if we can put into place something that works for everyone,” Scott said.

The governor said he would like to see an end to the public health emergency status lingering from the early COVID-19 pandemic.

“I would have signed onto something like that,” he said.

For now, the state’s emergency status is still in effect.

The governor was asked if the state would consider any restrictions on the use of the CCP-owned social media service Tik-Tok, and he said that his administration is looking into it.

“We are weighing that out whether we would ban it or not, but we’re not sure,” he said.