The U.S. Border Patrol last week helped save the lives of unsuccessful northern border crossers who attempted to cross into the United States in cold temperatures in Vermont and New York.

On Dec. 3, agents rescued an individual in North Troy who had fallen unconscious and was suffering from hypothermia. The person was rushed to a hospital.

According to U.S. Customs and Border Protection, a supervisory Border Patrol agent on patrol “witnessed an individual collapse on the side of Main Street in North Troy, Vermont. The agent requested Emergency Medical Services and continued to assess the individual, who was by then verbally unresponsive and in obvious physical distress.” 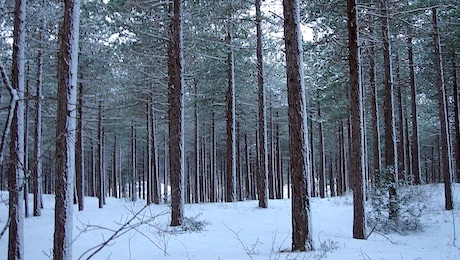 CHILLY TRAVELS: Cold temperatures at night make for potentially dangerous conditions for those who attempt to cross the northern border with Canada illegally.

Additional agents arrived and the individual was wrapped in blankets and moved into a heated vehicle until EMS could provide further assistance. The weather was described as “near-freezing and rainy” at that time.

The patrol agent in charge commented on the dangers that border crossers encounter in the winter months, saying “as we get deeper into the winter months the likelihood of these types of encounters ending poorly rises exponentially.”

The area is part of a border patrol section called the Swanton Sector, which is responsible for securing the northern border for Vermont, as well as New Hampshire and northeastern New York.

Another group was rescued in New York

Just a day earlier, on Dec. 2, another incident occurred on the Canadian/New York border when other border crossers were discovered in danger in the forests of Churubusco, New York.

“Following a vehicle stop of a suspected human smuggler near the International Border between the United States and Canada, Border Patrol Agents learned — through roadside interviews — that the group in question, which included a family and their three children (aged between one and eight years old) were attempting to navigate a heavily wooded area in near-freezing temperatures,” the CBP report states.

The group members, all citizens of Mexico, “conveyed they were cold, disoriented, and scared,” according to CBP. The migrants were given warm clothes at the Burke Border Patrol Station. A local resident who had called the border patrol had also offered shelter from the cold.

Burke Station’s Patrol Agent in Charge, Richard Parker, said that border crossings are not only illegal but dangerous.

“Attempting to cross the border illegally carries with it many consequences, not just administrative and criminal actions against the violator,” Parker said. “This event could have turned tragic. I commend the agents on quickly assessing the situation and taking immediate action to preserve life. Furthermore, our appreciation goes out to the resident who provided shelter and called the appropriate authorities.”

A new report by The Epoch Times out Friday indicates that morale is low for many border patrol agents. It states that 14 agents committed suicide in 2022.

“CBP agents are exposed to traumatic experiences that affect their lives, said the lawmakers, noting that it’s common for law enforcement officers to keep their mental health needs to themselves,” the report states.