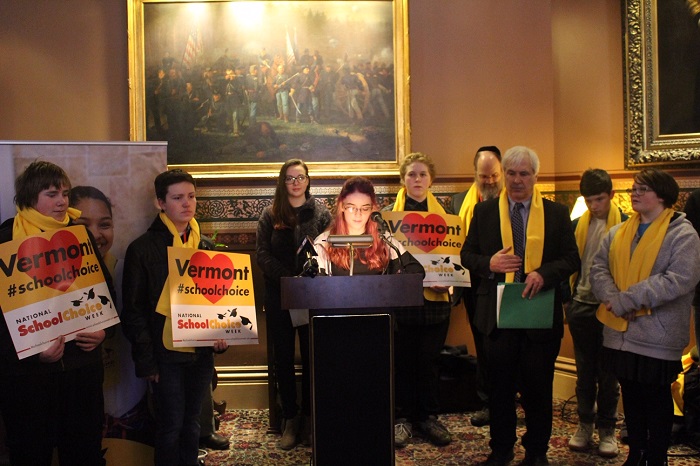 SCHOOL CHOICE WEEK: Piper Sylvester is one of many students from Compass School, located in Westminster, who spoke about why school choice is important for Vermont students.

MONTPELIER — Vermont’s fourth celebration of School Choice Week came to the Statehouse on Wednesday, with students sharing stories about the benefits of choice and education policy leaders calling for more action.

“School choice has offered thousands of Vermont children an opportunity to learn and flourish in an environment that is most suited for their talents and needs. Advocates believe that school choice honors good education choices for both public and independent schools.”

School choice has been available in Vermont since 1869, but it currently varies from community to community. In Vermont’s rural areas that lack a public school, students and parents get to choose the school that suits them best, and tuition is paid for by public taxpayer funding.

“I have a bill on the wall in the Education Committee this year right now and, if passed, would allow a student who is being bullied to find another school to find an opportunity to get a fresh start,” she said.

Strong said she learned why school choice matters through taking part of the education of her own children.

“During those years I saw firsthand how each child learned differently and had completely different interests which motivated them to learn in different ways,” she said. “Children are naturally curious, inquisitive, and are good learners as long as their environment doesn’t interfere with that desire.”

School choice legislation is unlikely to gain any traction in the current legislative session. Sen. Phil Baruth, D/P-Chittenden and chair of the Senate Education Committee, told True North he had no comment about School Choice Week because he does not expect his committee to take up the issue this year.

Ferland said one difference in this year’s celebration of School Choice Week was to include public schools in the cause.

“In our invitation this year we opened it up to public schools as well, and we feel that any division between public schools and independent creates a division in a good education for our children,” he said.

Rick Gordon, director of the Compass School in Westminster, also spoke. He shared a success story of one particular student who credited his educational success to school choice in Vermont.

“He said ‘I want a fresh start,’ and he knew if he had gone on to the local high school where his siblings had all failed, and where he was already seen as a troublemaker, he wasn’t going to do well,” hesaid.

Piper Sylvester, a student at the Compass School, also took to the podium to explain how she benefited from going to the school that fit her best.

“I’ve spent the entirety of my school career questioning my intelligence and my social role within the Waldorf School,” she said. “I never understood why my peers seemed to be more skilled than me — I was in an environment where this was never talked about. Choosing a new school for me helped me to understand how I learned and how to have confidence in myself.”

West Nelson, another student from the Compass School, said being able to choose her school was life-changing.

“When I decided to go to Compass, I did not realize how much this choice would change my life. As a person, as a student, and as a community member, I have grown in ways I had never thought possible,” she said.

Nelson explained that her favorite studies have included social sciences and filming and editing.

Valentin Klug, also from Compass, said school choice has helped address some of his learning disabilities.

“I started in first grade in a public school, and after a year I knew it wasn’t for me,” he said. “I have disabilities in both reading and writing, and a big problem for me was even noticeable in my first grade year. I did not have the support that I really desperately needed.”