In one sentence at a press conference Wednesday, Brad Ferland of St. Albans declared the goal of National School Choice Week: “School choice should be expanded, and not taken away.”

In Vermont public schools, school choice supporters are fighting hard, with varying degrees of success. Shrinking enrollments have school systems and teachers’ unions fighting for every student and dollar they can get. Proposed legislation would require universal access to afterschool programs, enhance public pre-school education, and mandate enrollment up to age 18. 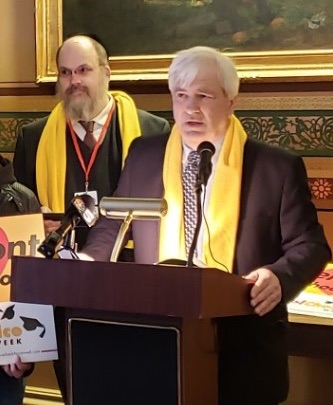 Brad Ferland, right, declares that “school choice should be expanded, and not taken away” at a National School Choice Week press conference Wednesday in the Cedar Creek Room of the Vermont State House.

Yet public schools do offer some choice. For example, Act 77 of 2014 offers advanced high school seniors “dual enrollment” to earn college credit, and requires personalized learning to “get students off the conveyor belt” of standardization, attorney and former school board chair David Kelley of Craftsbury said.

Dual enrollment “has been a great success,” Kelley said. But the effort to personalize learning in a public school environment has struggled against institutional inertia. “It’s like turning the Titanic, moving towards something that is student-focused,” Kelley said.

The state bureaucracy also has been slow to recognize that student-centered local schools would attract new working Vermonters. “If we do that, Vermont can become a magnet for every parent with young children in the country,” Kelley said.

Another impediment to student-centered local schools has been the forced mergers of school districts. As Rep. Vicki Strong (R-Albany) said at today’s press conference, “bigger schools do not necessarily mean better education or more equality.” The Vermont Supreme Court will likely decide in two months if the State Board of Education exceeded authority when it ordered the Athens school district (and others) to merge, said Kelley, the lead attorney for Athens.

Although state law allows some inter-school transfers for high school students, the Legislature won’t give parents an educational voucher to spend at the school of their choice. In Montpelier, significant school choice is unlikely to happen anytime soon. An education committee chair asked about school choice today said flatly, “nothing’s going to happen this year.” That will likely include H.297, Strong’s bill to allow victims of school bullies to attend another school.

Magnet schools — public schools offering specialized curricula such as STEM, fine arts, or language — are not available in Vermont, unless one includes technical education centers. For parents seeking the right fit for their atypical student, private schools are an option – albeit an expensive one. Vermont offers 130 independent schools — religious, general education, special education – with a total enrollment of 8,800 students grades K-12.

Count Deb Hamel of Bellows Falls as a believer in the private school alternative. The former vice-chair of the New Hampshire Board of Education works part-time at the Compass School, a Westminster private school that specializes in personalized learning. She wishes she’d had the option when she was written off in public school.

“I was told in school I wasn’t college material,” Hamel said. “I hated school. Everybody sat in rows. The smart kids gave the answers and those of us who weren’t at the top of the class lagged behind and mentally dropped out, just going along and doing the best we could.

“No one me asked what my interests were, no teacher took me aside and said how are you doing,” she said. “It was as if as a student, I really didn’t matter and I carried that through most of my adult life. There was absolutely no excitement in learning.”

Vermont’s home-schoolers — like many separatists — avoid the public spotlight. Yet they thrive. “The trend the past 4-5 years is up,” said veteran home school teacher and organizer Retta Dunlap of Woodbury recently. “I have stats all the way back to 1981 and it is an upward trend all the way to the present day. The trend is the opposite of what public school enrollments are each year.”

Attention paid by the Legislature to home schoolers is not always welcome. For example, S.9, introduced by Senate Education Chair Phil Baruth, would require criminal and child abuse background checks for all adults (except parents) involved in home-schooling. Intended to protect children from abuse, it is also seen as a costly, unnecessary piece of state intrusion in family matters.