Steve Klein of the Joint Fiscal Office briefed the Pension and Benefits Task Force, which is looking into how to fix the state’s $6 billion unfunded pension liabilities, on the current state budget as well as impending budget pressures in the pipeline. Klein’s slide show revealed a frightening increase in spending with daunting implications for Vermont taxpayers.

Page 5 of Klein’s report illustrated the overall growth in state spending from FY19 to FY22 from just under $6 billion annually ($5,958.0) to $7.36 billion in 2021 with a slight decline to $7.175 billion in FY22. This is largely due to federal infusions of cash for Corona virus relief, but, as Klein warned, as this flood of outside money subsides there will be pressure to replaced it with local revenue sources – higher taxes. 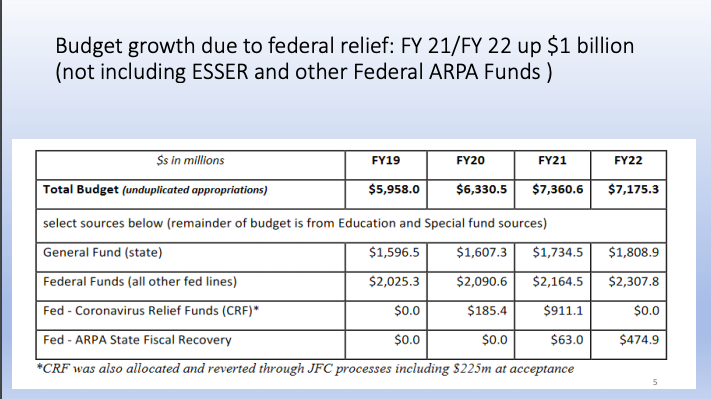 This shows a nearly 25 percent increase in state spending in just two years. Nearly a billion of the dollars fueling this spree are calculated to go away in 2022.

Klein admitted that his list was incomplete. I’ll add to it the massive spending that would be needed for the proposed expansion of taxpayer funded childcare from birth to five now being pushed relentlessly by Let’s Grow Kids, which would amount to hundreds of millions annually.

How will all of this be paid for? You! You will have to pay for all of this via new taxes and fees.

2 thoughts on “Roper: An unsustainable appetite for spending”