A report by the financial services website WalletHub has figured which states have the most and least restrictive COVID-19 restrictions on freedoms and the economy. Vermont has the most restrictions in the nation among states with the lowest death rates.

The Green Mountain State ranks third in the nation for its coronavirus death rate. The state never had a significant COVID outbreak like New York or Florida.

However, a new study shows it is the eighth highest state in the nation when it comes to COVID-related restrictions on personal and economic freedom.

WalletHub has been putting together rankings since May, and the latest update was on Aug. 11. The rankings include 19 metrics such as face mask policies, travel restrictions, business policies, school policies, and more. 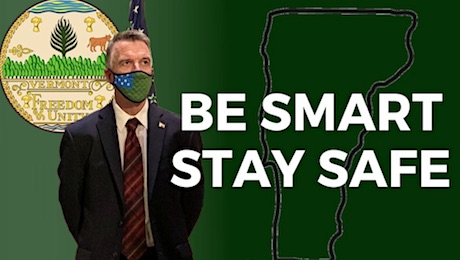 LITTLE FREEDOM: Despite having the lowest death rate in the nation and just two deaths in the past two months, Vermont has the eighth most restrictive lockdown policies in the nation according to a new study by Wallethub.

“Our data set ranges from whether child-care programs and restaurants have reopened to whether the state has required face masks in public and workplace temperature screenings,” the report’s introduction states.

The economic consequences of Scott’s shutdown may be dire. The Vermont Legislature’s economist is predicting revenue losses due to the economic shutdowns initiated by Gov. Phil Scott for the 2021-2022 fiscal years to be $430 million. The coronavirus used to justify the restrictive measures has currently killed 58 Vermonters, all but four over the age of 70. The state has seen only two COVID deaths in the past two months.

The state with the most regulations was California, with a score of 21.59. One California immigrant says that California Gov. Gavin Newsom’s COVID policies have cost him everything he’s gained.

“Newsom does not understand, he does not,” said Adam Kovacs, owner of a North Bay fitness company told KTVU TV. “I’m an immigrant and I worked very very hard to get here, and little by little I’m losing everything that I built.”

Newsom was the first in the nation to impose a statewide stay-at-home order on March 19, which resulted in the state having the fifth-highest unemployment rate in the nation for June. The state has had 10,600 deaths associated with COVID-19, comparable to its several thousand flu deaths each year.

The state with the fewest COVID-related restrictions was South Dakota, at 87.38. Republican Gov. Kristi Noem decided not to declare a state of emergency and shutter the state’s economy, nor remove citizens’ basic rights. The results are the state has a low death count of 165, and its economy has a $20 million budget surplus.

The study emerges as reports from nations in Europe show a trend that nations such as Sweden, which did not engage in an economic shutdown, still exhibit some of the lowest death rates while maintaining economic stability compared to its locked-down neighboring countries.

“Life has largely returned to normal in Sweden, and it all happened without the economy-destroying non-pharmaceutical interventions (NPI) demanded by the ‘public health expert’ class, who guaranteed that chaos would come to every country that disobeyed their commands to hit the self-destruct button for their nations,” The Federalist author Jordan Schachtel wrote.

One of the authors of the study Doctor Andrew Spieldenner of California State University says the nation’s economy as a whole is in for a major shake-up.

“There will be changes in the economy that we cannot predict,” he wrote. “The impact of 30,000,000 people in the US filing for unemployment (much less the people who were not part of the workforce or could not apply for unemployment) will be far-reaching. Also, some businesses found new models to keep going amidst the pandemic.”

Another author, Clair Yang, an assistant professor at the University of Washington, warns of the consequences of implementing high-tech “contact tracing” to survey those who test positive for the coronavirus.

“Research shows that many countries in the East Asian region, including South Korea, Singapore, Taiwan, and China, have implemented strict rules on digital contact tracing and used digital travel history of patients to predict risks for the general population.

“This approach would be highly controversial in the Western world. Contact tracing can be a serious infringement of individual privacy, but one’s travel data if used in the right way could also have positive external value for the general public. At the end of the day, it is a trade-off between public goods and individual rights.”

20 thoughts on “Report: Vermont among states with most COVID-19 restrictions”