Yet the outdoor industry brought in 3.1% of the state’s GDP that year, according to the report. 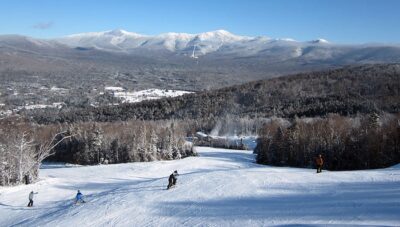 Bretton Woods Resort in New Hampshire. A view of Mount Washington can be seen in the distance.

New Hampshire’s population is the 11th lowest in the U.S. and it has the fifth lowest total area as measured in square miles, according to the U.S. Census Bureau.

“We’re a small state, so one of the great things about New Hampshire is proximity to recreation – and the variety that’s within that proximity,” said Brent Wucher, public information and marketing officer for parks for the New Hampshire Division of Parks and Recreation.

The state features campgrounds, three state parks along the seacoast, inland beaches, skiing and hundreds of lakes. Lake Winnipesaukee is one of the largest lakes in the region. Visitors can see Boston’s skyline from the peaks of some of the state’s mountains, Wucher said.

The COVID-19 pandemic’s impact on the country included visible changes in New Hampshire’s recreation industry. While Franconia Notch State Park, the state’s “flagship park,” lost its international visitors during this period, an influx of American visitors seeking socially distanced activities, including hiking “basically filled the gap,” Wucher said. Around New Year’s Day 2021, the state saw 1,000 participants register for its First Day Hike event, which was self-guided this year because of the pandemic. That participation, even without counting any unofficial participation, is much higher than in typical years, he said.

“We really don’t see that kind of thing during the winter because it can get pretty nasty up here during the winter, but people need that outlet right now,” he said. “We’re just glad that we have that outdoor economy that’s really important to our governor and we’re able to keep on moving ahead in supplying that outdoor venue.”

Camping has also been popular during the pandemic, as people are seeking “a contained home away from home,” and the state has been looking at different ways to expand its camping offerings, he said.

“That, I think, is going to be a big factor in 2021,” he said. “I think more people, instead of staying in hotels and going traveling outside their comfort zone, they’re going to look at camping and buying RVs and buying camping equipment, which is going to also fuel anybody in the economy who works within supplying those goods for outdoors, from tents, survival gear – even to apparel, things like that.”

The state also holds the eighth highest value brought in by snow activities (after Colorado ($1.7 billion), Utah ($666 million), California ($590 million), Washington ($287 million), Vermont ($287 million), according to the report. Snowmobiling interest has prompted restaurants and lodges to open, Wucher said. The Nansen Ski Jump, which was built in the 1930s and abandoned in 1988, is undergoing restoration and is scheduled to have an inaugural jumping event in February 2022.

Wucher said the state has seen a trend of professional millennials, Gen Z members and retirees moving into the state. REI Co-op chose North Conway, North Hampshire, for the location of its first experience center store, which opened in September 2019. Unlike REI Co-op’s traditional retail stores, this one also provides guided outdoor experiences.

“We’re a small state, but there’s so many things to do within a short distance of each other. So much variety,” he said. “And it’s all fueling that outdoor economy.”