The recount for the Grand Isle – West Milton district in the Vermont House of Representatives will be held Friday, Nov. 20 at the North Hero Town Hall, sources say. 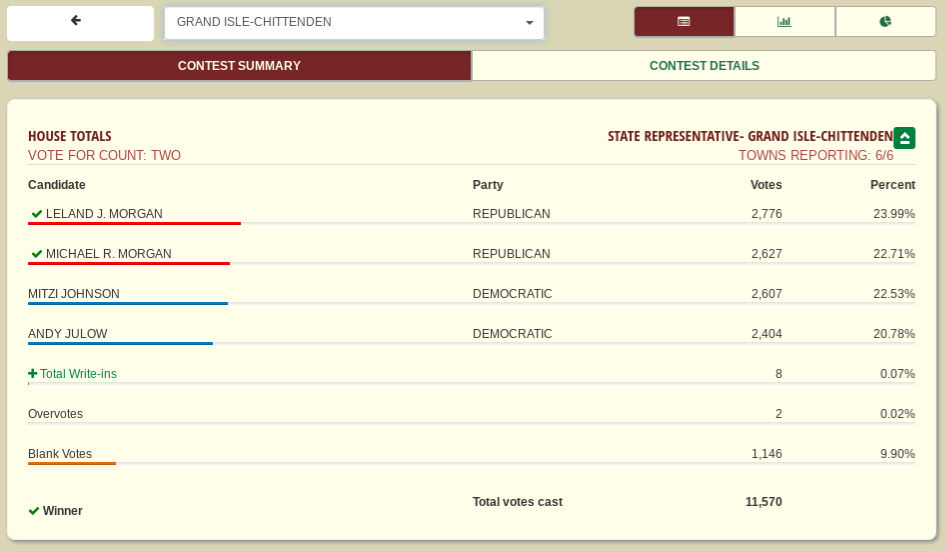 Local paid media campaigns may have played a role in Johnsonâ€™s defeat. Before the election, local Republicans ran full-page ads in the Islander newspaper decrying Johnsonâ€™s support for the Global Warming Solutions Act (H688) and the carbon pricing they said is likely to result. Also before the election, opponents of marijuana legalization ran advertising criticizing Johnson for her role in passing S54, this yearâ€™s bill legalizing the retail sale of marijuana.

If the recount finds Johnson a winner, she may face competition for election as House Speaker. Three, possibly four candidates have thrown their hats into the ring. Reps. Jill Krowinski (D-Burlington), Sarah Copeland-Hanzas (D-Bradford), and Charlie Kimbell (D-Woodstock) all have publicly declared their candidacy.

Jill Krowinski, the House Majority Leader, is a former vice-president of Planned Parenthood of New England. Copeland-Hanzas chairs the House Local Government Committee and is a former member of the Democratic House leadership. She co-chairs the Climate Caucus. She and Copeland-Hanzas represent two of the driving interests behind the Vermont Democratic Party: support of legal abortion and carbon emissions reduction. Additionally, Copeland-Hanzas is an outspoken legislative advocate of retail sale of marijuana.

Kimbell is less well-known both inside and outside the Legislature. He holds no chair or vice-chair position. He sits on the Commerce and Economic Development Committee. Raised in St. Albans (his mother was Vermont Mother of the Year) as the youngest of eight children, he attended Woodstock Union High School and graduated from the University of Vermont, majoring in political science and competing for the UVM alpine ski team. He has worked for 30 years in the private sector in diverse industries: retail and commercial banking, art licensing and publishing, software development and publishing with MISys, Inc, sales and marketing consulting, and as co-owner of Elevation Clothing in Woodstock.

Also mulling a run is Rep. Cynthia Browning (I-Arlington), who lost in the general election after the Democratic Party ran two candidates against her. Browning was an irritant to Johnson during the last session, publicly opposing Johnson on several policy and procedural issues. The Vermont Constitution does not forbid a non-representative from being elected Speaker of the House.