The Vermont secretary of state on Wednesday completed a post-election audit of the 2020 Vermont general election, and auditors found no major discrepancies from the results announced in November.

The post-election audit, which took place at the Pavilion Building on State Street in Montpelier, re-examined every ballot in seven precincts from across the state. The ballots had been sealed in ballot bags following the Nov. 3 election.

“I think that the important takeaway from this is that we have a simple, safe and secure elections process,” Condos said. “We follow the rules, the clerks follow the rules, and we are fortunate to have hard-working town clerks, hard-working elections staff. And we’re thankful to our voters for turning out this past year and setting a new record for voter turnout.” 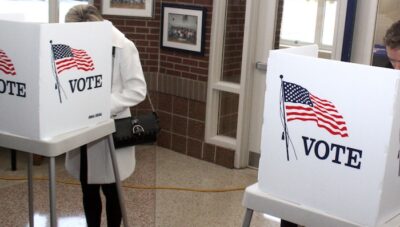 MAKE IT COUNT: A recount of elections in seven Vermont communities took place Wednesday to find out if the 2020 elections were accurate.

Earlier in the week Condos said this work is conducted “to verify the accuracy of election results and provide Vermonters with further confidence in the integrity of the election process.”

In addition to the South Burlington district, the precincts randomly selected for this election season’s audit include Pownal, Randolph, Brandon, Topsham, Warren and Worcester. Of these seven communities, six use electronic tabulators to tally their votes, whereas Topsham uses hand counts. Every race on the ballots was audited.

Before the recount, the ballots were stored away in vaults at the various town offices, sealed away in bags. The video of the audit can be seen here at ORCA Media’s YouTube channel.

The success of the audit does not mean that Kinville doesn’t see problems with the Vermont system, which Condos claims is scandal-free. Critics of Vermont’s election system point out that the state has no effective methods in place to check for common types of fraud.

“We don’t have the ability to check the signatures,” Kinville said. She added that sometimes if a family brings in five ballots, she will check to see that the signatures should look different from each other. Asked if those types of checks are required of Vermont clerks, she said no.

She also said the early voting in Vermont is a trade-off of security for accessibility.

“Do I think early voting has its niche and its usefulness? Absolutely. Do I think it has the ability to be corrupted? Absolutely,” she said.

Immediately before the recount began, Condos spoke and cited the COVID-19 pandemic as the reason for expanding the mail-in ballots last year. Vermont has had 246 coronavirus-related deaths since the beginning of 2020 — 141 victims have been 80 years of age or older.

“Vermonters rose to the occasion voting in record numbers during a global pandemic,” Condos said. “Our decision to mail a ballot to every active registered voter resulted in new records both for early voting and for early turnout. Vermonters were able to vote safely and securely without needing to decide between putting their health at risk, the health of their communities at risk, or exercising their constitutional right to vote.”

A recount last year for Grand Isle of a House race between Republicans Leland and Michael Morgan and then Rep. and House Speaker Mitzi Johnson was just one vote shy from the original count.

In a recent article about Vermont’s voting system, Kinville was quoted as explaining different scenarios in which fraud can occur in Vermont. For example, if a parent wants to vote for their out-of-state college students, there is no safeguard against it.

“A family member can request one now for everyone in their house, and some of them may be college students voting in another state that has not updated their voter status in Vermont,” she said.

Despite Condos’ endorsement of making vote-by-mail a permanent part of Vermont’s elections, New Hampshire Democrat Secretary of State Bill Gardner has been outspoken against expanded use of absentee voting by mail — most recently in his opposition to H.R.1, a federal bill that aims to mandate universal mail-in voting.

“It will damage voter confidence, will diminish the importance of Election Day itself, and ultimately result in lower voter turnout,”  Gardner told the U.S. Senate Judiciary Committee earlier this month.

The results of the audit will be posted on the secretary of state’s website as soon as the data is formatted.