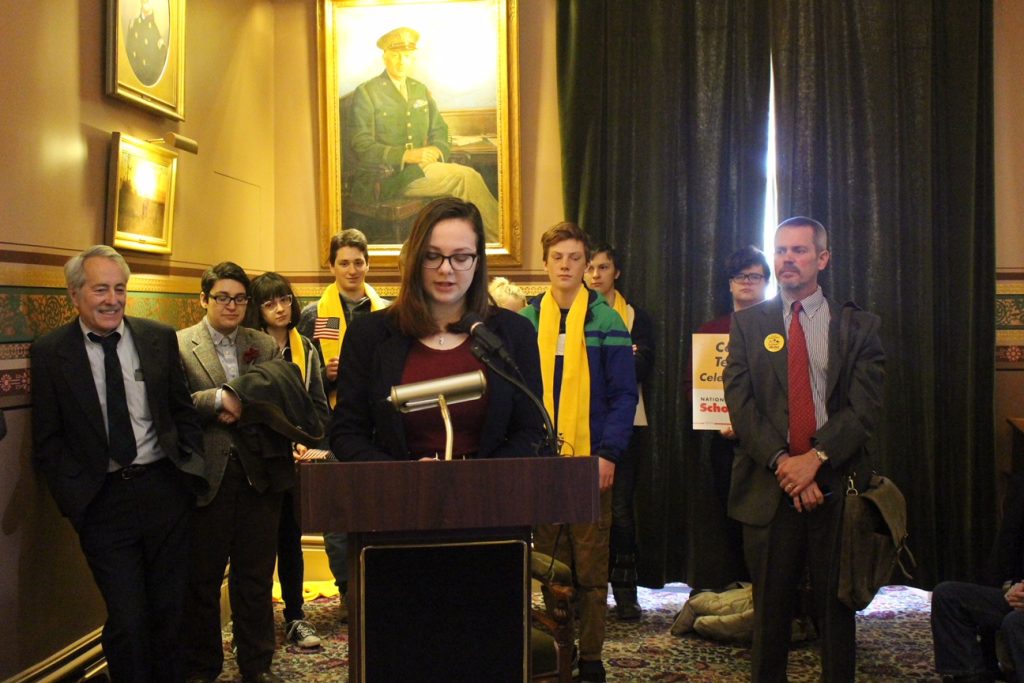 SCHOOL CHOICE WEEK: West Nelson of Compass School in Westminster speaks on why going to the school of her choice helped make her a better student.

MONTPELIER — More than a hundred students and education activists crowded into the Statehouse and Plaza Hotel on Wednesday to advocate for increasing school choice throughout the state.

Vermont continues to offer school choice in select communities, but it’s not universally accessible to all students who might benefit from switching schools.

In a news conference held at the Cedar Creek Room of the Statehouse, Chandra Pero, a student from Compass School in Westminster, was among the various students to speak on how choosing one’s school can lead to personal success.

“I lost myself in public school, I didn’t see myself graduating, I could barely see myself getting past my sophomore year,” Pero said. “But here I am in the second semester of my junior year. Since attending public school I can sincerely say that I’ve grown as a person and as a learner in more ways that I could ever have imagined.”

She said while she was a student in her local public school, she fell into daily drug and watched her grades go downhill.

“I often skipped school, and on the days I did attend, the teachers didn’t know how to help me,” she said.

Pero said the larger class sizes and the overburdened teachers were not able to intervene. She finally turned to rehab, and when she was discharged, she looked for a new school environment and chose Compass School.

“I knew I couldn’t go back to the same school — I needed a place that could meet both my emotional and academic needs,” she said.

Two more students, West Nelson, also of Compass School, and Abigail Ham of Lyndon Institute in Lyndon Center, shared stories about how the ability to change their scenery revitalized their education experience.

Ham was home-schooled, but she needed something more.

“My time at Lyndon Institute has opened up a world of possibilities for both now and my future that I could not have foreseen,” Ham said. “My desire to transition was based on my desire to study in areas which my parents simply couldn’t teach me.”

She said art, music and Chinese were some of those subjects. She ended up having her art displayed in galleries, participating in a band and traveling abroad for language.

Nelson shared her thoughts as well.

“It is the best place for me to become the best person that I can be,” she said. “Compass is where I fit, and school choice has given me the opportunity to make the most of my education.”

David Kelley, a longtime school choice activist and lawyer fighting against forced school mergers, took the podium to give examples of how school choice has changed lives.

“No school, public or private, can be all things to all students all the time, and it’s important that we understand that,” he said.

He said a few years ago he was approached by a family because their daughter wanted to be an artist and had exhausted all the options at her current school. The daughter wanted to attend the Oxbow School of Visual Arts in California, and when the school board allowed her to go, it was a life-changing experience.

“Today that student is on a scholarship to the Pratt Institute of Art in New York City,” Kelley said. “And she’s not just on the Dean’s List, she’s on the President’s List.”

Rob Roper, president of the Ethan Allen Institute, pointed out that Vermont’s student population has dropped from 106,000 in 1997 to about 80,000 today.

“We’re losing our young families. How are we gonna get people to come here?” he asked.

“I know people have moved here from places like Rhode Island, from places like Delaware —  they’ve brought jobs with them. It’s because Vermont has school choice, and if we can open that up as a statewide opportunity, I think it’s a real economic development opportunity for us.”

Deborah Bucknam, a St. Johnsbury lawyer and former Republican candidate for attorney general, said a lawsuit is on the way to expand school choice to all students in Vermont.

“We are hoping in the next couple of months to be filing a lawsuit which simply says, as the Vermont Supreme Court said in the Brigham case, that educational opportunity should not be based on the fortuity of a child’s residence.”

Brigham v. State of Vermont, a landmark case from 1997, determined that children must have an equal opportunity for an education. The ruling focused on inequity between communities, especially as it pertained to how schools were funded.

“Educational opportunity doesn’t just include money,” Bucknam added, “it includes the opportunity to attend the school that fits you the best.”