Editor’s note: The town of Windham, New Hampshire, is presently conducting an audit of its Nov. 3, 2020 election, in which a hand recount one week later revealed that four Republican candidates each gained about 300 votes not counted on Election Night. Vermont uses the same AccuVote-OS vote tabulators owned by Dominion and managed by LHS Associates, of Salem, N.H. The following article by Sarah Ibanez has been republished with permission from GraniteGrok.

In a stunning conclusion provided by the Windham Audit Team, it was determined that some machines were tricked by the creases in mail-in ballots to the detriment of Republican candidates. The creases resulted in overvotes that crushingly affected straight-ticket Republican ballots in particular.

This revelation is news to the public, but our trusted politicians and Jeff Silvestro of LHS Associates knew this would happen months before the election occurred.

Irrespective of their knowledge, they collectively committed gross negligence when they failed to implement corrections that would have protected the voters of New Hampshire. 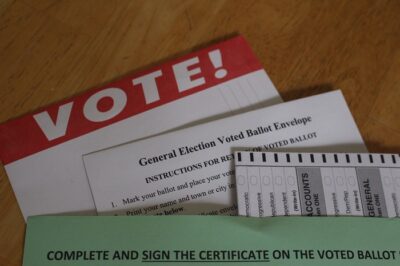 “Folded ballots always have a higher possibility of being misread or rejected. The creases can cause shadowing and result in misreading/rejection,” LHS CEO Jeff Silvestro said.
“I’d like to see less folded ballots, but I don’t think it’s possible with what we’re trying to accomplish.”

Moreover, Philip J. Abirached, Chairman of the Windham Republican Town Committee reported yesterday that “the function of rejecting overvotes was turned off per the state’s request.”

The combination of events lends credence to all reasoning behind New Hampshire citizens’ distrust of elected officials, especially some Republicans who are deemed infiltrators.

Found on the Secretary of State’s website under sos.nh.gov.minutes-may-19-2 were the transcribed minutes for the “Meeting of the Select Committee on 2020 Emergency Election Support” held on May 19, 2020 at 2:00 p.m.

This meeting was convened to determine how to implement Covid-19 mandates such as PPE requirements and sanitizing protocol for the November 3 election proceedings.

The meeting style was a “question and answer” format that also included discussion surrounding the anticipated influx of mail-in ballots.

All of the participants were clearly listed at the top of the minutes to include House Election Law Committee Chair, Rep. Barbara J. Griffin; David Scanlan, Deputy Secretary of State; Orville “Bud” Fitch, Legal Counsel to the Secretary of State; Nicholas Chong Yen, Assistant Attorney General; among others.

Except one. There is one person not listed as either “Member” or “Participating,” but who piped into the meeting unexpectedly pages deep into the transcribed scroll.

That person was Jeff Silvestro, President of LHS Associates.  The transcription refers to him as Jeff Silvestro of AHI Associates. (AHI is not a keystroke combination indicative of a typo. Not even close.)  His participation in the meeting though seemingly covert was instrumental toward the production and decision-making concerns of the ballots used in the 2020 General Election.

When a question was posed about the absentee ballots and whether or not they ought to consider using manila envelopes for people to remit the ballots to avoid having to fold them, Silvestro drew from his pre-existing knowledge.

“Folded ballots always have a higher possibility of being misread or rejected. The creases can cause shadowing and result in misreading/rejection,” Silvestro said.

“I’d like to see less folded ballots, but I don’t think it’s possible with what we’re trying to accomplish,” he said.

What were they trying to accomplish? Why did they not eliminate the problem entirely and go with manila envelopes?

Silvestro, as it turns out, had advised the committee that the November ballots would likely be 17” or 18,” at which point “postage would probably get cost-prohibitive.”

There you have it. A larger envelope to protect New Hampshire’s votes was “cost-prohibitive.”

His statement all but predicted the mass election integrity problem in which we currently find ourselves, yet nothing was done to prevent it.

The sheer number of absentee ballots printed in advance of the 2020 election should have been the driving force to inform the public of the impending problem and implement safeguards. Instead, they concealed the issue and disabled computer technology that was an existing and actual safeguard.

The design and printing of these ballots as it would square with the manner in which the machines were programmed to receive them, would prove integral to the Windham audit results.

So, who printed the ballots?

It has also been reported that Evans Printing Company in Bow, New Hampshire is the non-certified company that prints our federal election ballots. But who provides them with the design and copy?

Buried deeper within the scroll of the transcribed Minutes of May 19, 2020, Silvestro provides the seminal information.

“There are technical limitations within the programming software that designs the ballots and the code which goes around the perimeter and back of the ballot,” he said.

Strangely, and out of nowhere, Barbara Griffin (whose involvement we’ll discuss later) changed the subject completely when she asked Silvestro about putting a sheet of paper onto each voting station’s surface for the in-person booths.

Not so fast, Barbara. What about his answer? Programming software? Codes around the perimeter and backs of the ballots?

That’s a pretty sophisticated answer coming from the very supplier who Bud Fitch, Deputy to the Secretary of State, initially denied was involved in the printing of our ballots. (Phone interview of April 2, 2021.)

When pressed on the matter, Fitch admitted that LHS would have to be involved in order to make certain the ballots were compatible with the machines.

Does it matter, really, what company actually prints the ballots or would it be more relevant to our concerns who provides the “programming software that designs the ballots and the code which goes around the perimeter and backs of the ballots”?

Back to Windham and the preliminary results of the audit. Some machines, not all, misread the ballots — the very same ballots that Silvestro (at the very least) helped to configure.

The Windham Forensic Audit Team led by Harri Hursti, in a genius and unexpected move, proceeded to feed leftover absentee ballots (which they had filled out) to replicate resultant voting machine readings that can’t possibly be accidental.

It is difficult to describe in writing how the configuration of the candidates and the staggering of parties contributed to the lop-sided misreadings but suffice it to say that crease zeroed over a Democrat’s target bubble causing over-votes for straight-ticket republican votes for that particular race.

Quizzically, not all the machines read the ballots with identical results.

Perhaps a discovery in Bedford could help to explain the discrepancy.

It has been conclusively determined that Bedford consigned three machines, in particular, to tally the mail-in votes exclusively. Other towns report the same or similar protocol.

All of the mail-in ballots were dedicated exclusively to certain machines and certain machines only. It cannot be determined if every single town in New Hampshire followed this method, but it definitely was the case in several towns.

Why were the mail-in ballots (replete with creases) fed into specific machines? One would hope that those machines were custom programmed by LHS to correctly handle and eliminate the anticipated problem since they also decided to disable the feature that would have alerted election workers.

One would be wrong. The Windham results indicate otherwise.

LHS and its CEO, Jeff Silvestro have been vehemently protected and garrisoned by state and local politicians (Republican and Democrat alike) to include various Town Moderators, Selectmen, and the upper echelon itself — the Offices of Secretary of State and Attorney General.

As previously reported, Silvestro benefitted from a clause stricken from SB 43 (now law) that barred him from any involvement with the Windham audit due to his clear conflict of interest.

As a result, Silvestro’s black Mercedes Benz rolls onto the audit location’s parking lot where, on a daily basis, he commences to observe the Windham audit proceedings.

Silvestro has not only been present at the audit, but is an actual consultant wherein his advice and instructions have been relied upon for questions surrounding machine maintenance, training manuals, and passwords.

How LHS Associates miraculously transformed from an entity blackened with “conflict of interest” to actually becoming a consultant on the floor of the audit is a puzzler.

When questioned, he states that the auditors requested his presence, but SB 43 dictates that only three entities are authorized to invite observers. They are as follows:

If the auditors requested his presence, it would need to have been approved by one of the three entities–all of which have demonstrated a fervent defense for his input and involvement.

Upon further investigation, the actual request by the auditors was that a “tech” from LHS be available.  Silvestro took it upon himself to fill that position although he is not a computer technician.

Jeff Silvestro knew for a fact that the creases in those mail-in ballots would create a misread or rejection. He knew the placement of the candidates. He and his company helped determine the size and coding on those ballots. Beyond that, his company provided the software updates and machine maintenance on regular basis.

Every single politician involved in the meeting at issue knew it as well. And they did nothing.

Just as Silvestro inadvertently proffered information about the coding structure of the ballots before Barbara Griffin course-corrected him, he’s also the one who spilled the beans about the state’s egregious tactics.

“The function of rejecting overvotes is turned off per the state’s request,” he told Phillip J. Abirached.

This action ensured that the voter ballots were not rejected back to the voters (or election workers as would be the case with mail-in votes). Instead, candidate votes affected were not counted at all.

Furthermore, in Windham, poll challengers trained to look for anomalies were not allowed anywhere near the machines or tally tapes. They were kept behind a line at a distance of fifteen to thirty feet and the police were called when they attempted to do their job.

Thousands upon thousands of “Blank” votes were printed out on precinct tally tapes across New Hampshire, but they went undetected.

It was citizen activists who demanded copies of the tally tapes from their respective towns and cities using 91A requests (Right to Know) who are now in possession of the information on those tapes which reveal an alarming number of “Blank” votes.