Police have no leads on two recent crimes of red-painted political vandalism.

The weekend of Oct. 9-10, vandals painted “38” on an outdoor statue of Abraham Lincoln at the Bennington Museum. According to news reports, police say the “38” refers to the 38 Dakota warriors executed by Lincoln’s order after a violent uprising. GOP Chair Deb Billado discusses the significance of the vandalism in an op-ed. 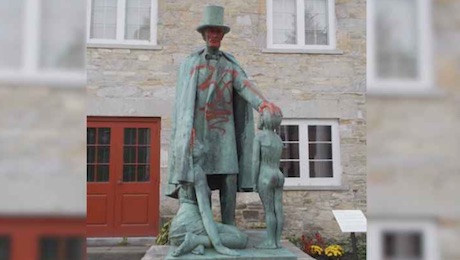 RELATED: Why has the woke mob gone after Abraham Lincoln in Vermont?

The vandals also erected a sign saying “Land Back” and circulated a historically revisionist pamphlet in downtown Bennington explaining why they defaced the statue of America’s Great Emancipator. The red paint was removed last week and the statue now looks back to normal.

“The conservators finished work last week. The piece has been cleaned and consolidated,” Museum Director Martin Mahoney said Monday. “The plan is next year to do a comprehensive cleaning, which was due anyway.”

Bennington police on Monday said there are no developments in the case. Abraham Lincoln Online says about the “Spirit of America” statue: “This bronze statue grouping by sculptor Clyde DuVernet Hunt depicts three symbols: Abraham Lincoln as Charity, a kneeling woman as Faith, and a child as Hope. Called ‘The Spirit of America,’ the work was displayed at the New York World’s Fair in 1939 before arriving at the courtyard of the Bennington Museum on West Main Street.”

The website adds: “Hunt, who came from a prominent Vermont family, was born in Scotland in 1861 and spent many years in Paris. After his death in 1941 his heirs donated the statue in his memory explaining that Hunt ‘held the martyred President in great and beautiful reverence.’”

“Faith, Hope and Charity” alludes to Paul’s first letter to the Corinthians in the Bible: “And now abideth faith, hope, charity, these three; but the greatest of these is charity.”

While the defacers of the Lincoln statue offered some explanation for their misdeed, no such rationale exists for the Oct. 8/9 nighttime vandalism at the Planned Parenthood office on Highland Ave. in Barre. Someone spray painted “Baby Killers” in red paint on the side of the building and on the sign in the front lawn.

The Barre vandals left no record — intentional or otherwise — of their crime, police say. “There is no security footage and the last I was aware no one had been identified,” Barre Police Chief Tim Bombardier said Monday.