This commentary is by Deb Billado, chairwoman of the Vermont GOP.

Earlier this month the woke mob turned their eyes north — right here in Vermont — and defaced a statue of the Great Emancipator, President Abraham Lincoln.

On Oct. 9 unknown persons vandalized the statute of President Lincoln that has long stood before the Bennington Museum. The statue’s face and hands were sprayed with red paint, and other messages. The museum officials estimated that it would cost “several thousand dollars” to undo the damage. 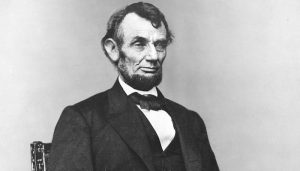 The first Republican President Abraham Lincoln is rightly honored on President’s Day as one of the finest Presidents America has ever had. His bust justifiably graces the Hall of Inscriptions at our State House. And the VT Republican Party still honors his legacy with an annual Lincoln-Reagan dinner (Which is coming up on Tuesday) because of the foundational impact Lincoln had on the Republican Party.

In a time of terrible national struggle, his leadership won a civil war, preserved the Union, authored the Emancipation Proclamation, and led the battle to enact the 13th Amendment to our Constitution that forever banished human slavery and indentured servitude in this nation.

“President Lincoln has been particularly revered in the Green Mountain State, whose men answered his call for volunteer regiments in the early days of the War, and saw it through to victory after shedding their blood at Cedar Creek and Gettysburg. The descendants of those early Republicans owe it to them to stand up for President Lincoln against his the defilers of his memory now.

So why has the woke mob gone after Lincoln? According to the AP story, in the Dakota war aftermath a military commission sentenced 303 Sioux warriors to be executed. President Lincoln personally reviewed the verdicts and set free 264 who had fought against Army troops, leaving only 39 to be executed for committing murder and rape (one of them was later pardoned, reducing the list to 38).

Liberating every African American slave in the south wasn’t good enough. Considering and pardoning 264 Sioux warriors wasn’t good enough. To be honored by the woke mob, and to be left to rest in peace, they are demanding that Lincoln literally pardon murderers and rapists. Despite their cries for social justice, it seems the woke mob is looking for the very antithesis of justice. True justice is holding wrong doers accountable, and setting the innocent free. Those who have defaced the Lincoln statue have shown that their sense of justice seeks to determine innocent and guilt almost entirely by group affiliation. This is wrong.

Republicans must set aside our differences and work together to oppose this absolutely maddening direction that a wild and crazed Left is violently pushing our society towards. The Republican Party stands to gather together those who want to oppose this kind of destructive behavior and work towards doing the work of putting a more functional society back together, instead of constantly tearing down.

If you want to join me and other Lincoln supporters in making a positive impact in the world, consider making a donation of $50 (or more) to the Bennington Museum, 75 Main Street, Bennington, VT 05201 with a note that you want to help with the cost associated with cleaning the now defaced statue, which has been a part of Vermont history for years.

14 thoughts on “Deb Billado: Why has the woke mob gone after Abraham Lincoln in Vermont?”