For the first time in recent memory Vermont’s county elections were not certified on time Friday. They have already been rescheduled twice, and later today we will find out if the official results may be delayed yet again. With the statewide canvass scheduled on Tuesday, another delay could create a new unprecedented situation tomorrow. 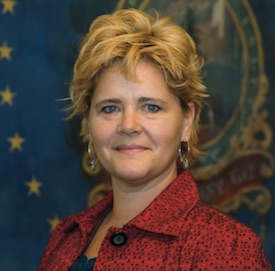 This error is attributable to the gerrymandering that occurred under the leadership of the Democrat’s new secretary of state candidate Sarah Copeland-Hanzas.

Never before has a secretary of state candidate been responsible for an election problem before they even entered the general election, but this Democrat will. In this case, Copeland-Hanzas’s desire to create a partisan gerrymandered map has caused new confusion and now election delays.

By taking the unprecedented step of splitting towns into different State Senate districts to achieve partisan advantages for Progressives (at the expense of moderate Democrats) Copeland-Hanzas has compromised a previously efficient and reliable system.

This new Chittenden Central district is causing most of the problems, because Progressive Democrats who are trying to tilt the Senate as far left as possible have created a single senate district that cut across town lines in three different municipalities. This has also created an unneccesary burden for the local town and city clerks related to separate ballots.

Copeland-Hanzas, in her role as Chair of House Government Operations Committee, had immediately rejected the tri-partisan common sense plan for a State Senate map which would have likely avoided this confusion and delivered us the reliable certification process Vermonters have been used to.

In an environment where there is a heightened awareness of election integrity, Copeland-Hanzas does little to ease these concerns, and is already demonstrating that her partisan leanings have clouded the potential for foresight on efficient, reliable elections. This is yet another example of how the new Democrats have elected the progressive partisan in their primary election and rejected the more technically competent candidate whose experience outweighed his partisan credentials.

Republicans recognize the importance of having efficient and predictable election processes and will continue to fight for common sense election reform that increases the confidence every Vermonter wants in their elections.