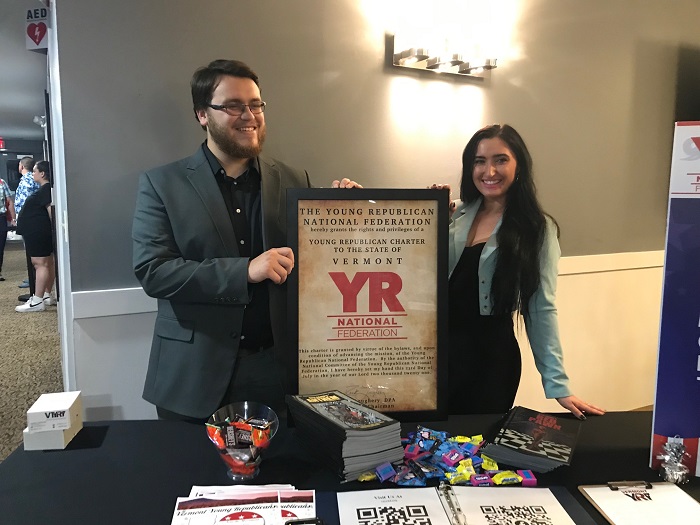 BRINGING TOGETHER YOUNG PEOPLE: Savannah Coelho, representing Turning Point USA, right, hosted an event that attracted more than 50 Vermonters. One of the speakers was Samuel Douglass, the chairman of the state’s Young Republicans organization, who is on the left.

WILLISTON, Vt. — A handful of speakers took to the stage at Ignite Church in Williston on Friday night to address a variety of Constitution-themed concerns, especially the battle against COVID-19 government restrictions including masks and vaccinations.

One speaker to address the audience of about 50 Vermonters was the church’s pastor, Todd Callahan. Callahan made news a year ago by resisting state orders to shut the church’s doors in 2020. While other attempts to refuse coronavirus mandates ended in lost court cases, Callahan was able to successfully avert a legal showdown.

“I had no idea that ten years later [after moving back to Vermont] I would be thrust into a political divide between Montpelier, the governor’s office, [Health Commissioner Dr. Mark Levine], and trying to keep the doors of this church open,” Callahan said. “No idea. Didn’t ask for it, didn’t want it, it just showed up.” 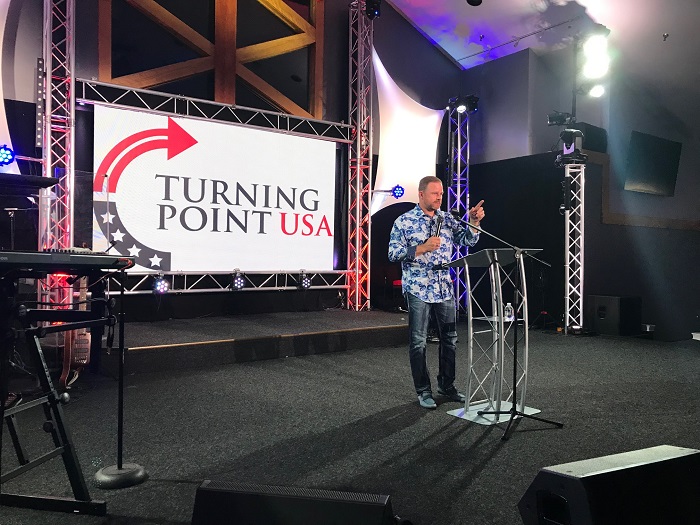 Callahan said he made every attempt to adhere to recommendations for having people wear masks and cleaning extensively around the building, but ultimately the governor’s administration would not leave them alone.

He said while the governor’s office didn’t attempt to forcibly re-close the church, they did indicate that they might hold a press conference in an attempt to publicly shame the pastor. Callahan responded by saying any such press conference would be met with a media response.

“[Dr. Levine] said we don’t want to do that, but if we have to have a press conference about your not closing, we will,” Callahan said. “So I said, ‘Dr. Levine, I appreciate that, but just remember, we have cameras, we have social media, I will buy air time — whatever we need to do to refute everything. …  So, if you really want to go down that road, we will go down that road.'”

Callahan concluded that the conversation ended shortly afterward and they were never bothered again by the administration.

State Rep. Samantha Lefebvre, R-Orange, also spoke at the event. She shared that the minority party is working hard to limit the amount of power government can take over citizens’ personal liberties during future outbreaks or other emergencies.

“We are trying on our end to introduce bills and legislation that will no longer allow these things to happen to you,” she said. “So, reach to your legislators, reach out to your town selectboards, your school boards, because that’s where the changes come from.”

Journalist Guy Page was another speaker at the event. He talked about how the people who are going to make a change in Montpelier must not be distracted by all the special interests that may abound.

As an example, Page spoke about Felix Hume, an 11-year-old student at Edmunds Middle School in Burlington. Hume decided to start his own protest against mask mandates, and he’s having an influence on the other children in the school.

“He’s even talking to his buddies and his buddies are saying, ‘hey you know I’m kind of sick of wearing these masks,'” Page said. 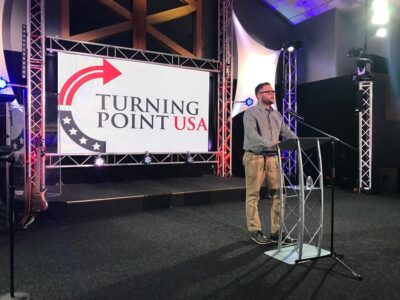 Another speaker at the event was Damien Jarrett, of the Walkaway Campaign, a group of former Democratic Party members who have left the party in recent years for various reasons. He said even existing Republicans can be a part of this “walkaway” movement.

“We need existing conservatives to welcome these people across the aisle,” he said. “Walking away is a long journey — it was for me. It took probably about two years for me to come full-circle. So we need you guys to help encourage these classic liberals who share common values … to come over and realize that our republic is being undermined.”

Samuel Douglass, chairman of the state’s Young Republicans organization, spoke and shared a story from his high school years on how a teacher who told him not to read a book by late conservative talkshow host Rush Limbaugh.

“And of course I was a teenager, and so now I have to read it, and I brought it home, and the rest is history,” he said.

Savannah Coelho, representing Turning Point USA, hosted the event. She said the organization has made great gains in Vermont in just one year.

“When I took this position a year ago, we had one chapter in Vermont,” she said. “Now we have nine, and we expect to double that number by next fall.”