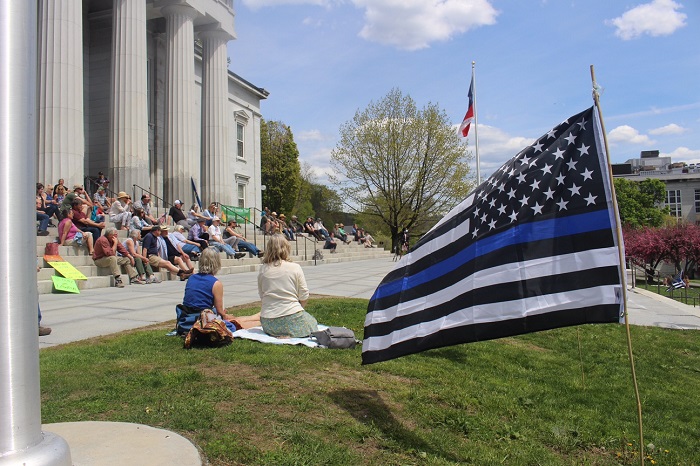 CROWDS GROWING: Over 100 Vermonters came to the Statehouse front lawn on Saturday to support police and protest heavy state restrictions on public life in response to COVID-19.

At least 100 Vermonters gathered Saturday on the steps of the Vermont Statehouse to show their support of police and to protest government COVID restrictions.

The event was hosted by former GOP gubernatorial candidate John Klar and the Vermont Liberty Network. The conservative group organized four such events across the state in May.

Klar warned that political opponents of liberty increasingly are attempting to demonize large groups of people based on political affiliation — such as conservatives and Trump supporters.

One of the day’s speakers was Jim Hogue, a 2020 GOP candidate for lieutenant governor. He is also one of six Vermonters awaiting a judge’s decision on a lawsuit against Gov. Phil Scott, Attorney General TJ Donovan, and Health Commissioner Mark Levine for allegedly overstepping constitutional authorities in mandating various COVID-19 rules.

Hogue suggested that the COVID-19 lockdowns were politically motivated.

“It would be impossible for all of this to happen if COVID-19 was just some virus,” he said. “They don’t care how many of you die, they want you in line.”

Changing subjects to address law enforcement, Leona Grearson from Barre read a letter from an anonymous police officer speaking on what it’s like to be a police officer in Vermont in 2021.

“No one asks what your social status is, what your color is, what race you are, or what sex, religion you are — we answer the call,” the anonymous officer wrote. “People do not get into this profession for the money. We do it because it’s truly a calling to help and serve our community.”

The anonymous police officer wrote that the response he sometimes sees from the community is anything but grateful.

“We have been sworn at, I have been spit on and disrespected and abused. [But] when the call comes, we will respond,” he wrote. “We are at a strange time right now, and it seems what is right is wrong and what is acceptable. I myself feel like I have to go into hiding, remove my thin-blue line sticker off my truck.”

Guy Page, editor of the Vermont Daily, spoke on the history of governments pushing the limits of what they tell their citizens to do. He cited Sen. Brian Collamore, R-Rutland, who read these words during the State Senate’s formal apology for participation in 1920’s eugenics legislation.

“One tragedy of this so-called progressive era is that significant harm was done in the name of human betterment,” Page read. ” … And someone commented on that, hmmm, it reminds me of what they may one day be saying after all of these years of aborting innocent babies, or requiring vaccination at some level, or whatever that crosses the line of the Constitution.”

During his speech, Klar compared civil disobedience over the state’s COVID-19 mandates to the civil rights movement from decades ago.

“You are all Rosa Parks,” he said. “The only reason more people don’t stand up is they just don’t know it.”

He said that government is using fear to manipulate the citizens.

“Remember Orwell? Do you think Orwell was telling us something in the ’40s when he was writing about this stuff?” Klar said. “It wasn’t just Soviets — he was telling us about our own government. The bloated dome always has the power to subjugate people; they believe that they are enlightened to protect you from yourself.”

3 thoughts on “Over 100 Vermonters turn out to support police, protest COVID restrictions”