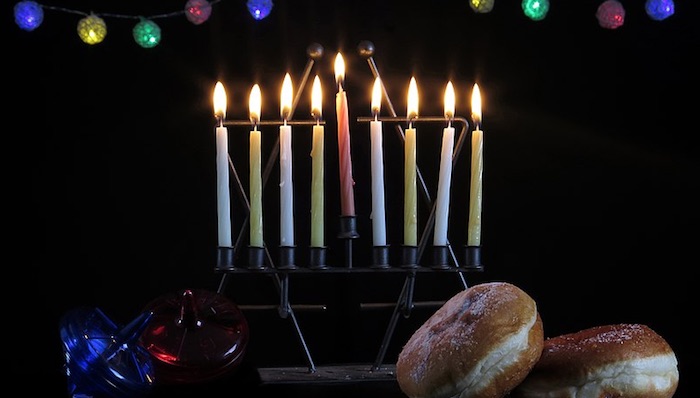 Hanukkah commemorates the miraculous success of the ancient Israelites led by Judah Maccabee in defeating the much larger forces of the Seleucid Empire and rededicating the Holy Temple.

This commentary is by Jay P. Greene, a senior research fellow in the Center for Education Policy at the Heritage Foundation.

The story of the Jewish holiday of Hanukkah is actually the story of a culture war — one similar in many ways to the conflicts raging in modern America.

The need to engage in and prevail in a culture war is a central lesson of the holiday, and the fact that ancient Israelites did so paved the way for Jewish continuity and survival over the last two millennia. If we want to ensure that the unique and positive aspects of the American Experiment will similarly persist, we need to remember this Hanukkah lesson.

Hanukkah commemorates the miraculous success of the ancient Israelites led by Judah Maccabee in defeating the much larger forces of the Seleucid Empire and rededicating the Holy Temple. But the conflict did not entirely or even primarily involve the expulsion of a foreign occupying army. Instead, the main enemy that the Maccabee forces repelled was the insidious displacement of Jewish observance with Greek culture and religion.

For example, statues of Greek deities were erected in the Temple. The slaughtering of pigs replaced Jewish sacrifices and rituals in the Temple. Public authorities also constructed gymnasiums throughout the land so that children could be educated in Greek practices of physical contests.

The Seleucid leader, Antiochus IV, imposed these Hellenistic customs at the request of a portion of the ancient Israelites who had become enamored with Greek culture and values. They were attracted to Hellenism because they perceived it to be more rational and scientific, and, because it was attached to the ruling authorities, they believed adopting these customs could prove advantageous. Those who clung to traditional Jewish practice were seen as backwards and burdensome, justifying compulsion to get them to modernize.

If this story sounds familiar, it may be because it bears many resemblances to our current cultural conflicts. Some people have become enamored with what they believe are rational and scientific ways and are convinced of the need to displace the traditional customs to which others cling.

If, for example, you resist having your daughters become boys, don’t want girls and boys to play on the same teams, or share the same locker rooms, it is only because you don’t understand the advances of gender ideology and your children need to be rescued from your backwardness. Mind you, gender ideology is no more scientific and rational than worshipping statues, but ruling authorities are not prone to doubt their superiority.

Similarly, schools and universities are increasingly dominated by the view that America is systematically racist and reducing its global influence would be a positive development. Those who fail to affirm this “true history” and continue to believe that America, despite all of its shortcomings, is a force for good in the world may find it hard to raise their children with that perspective. Love of country is no more fashionable among today’s ruling elites than love of God was among the Hellenized elites of antiquity.

Most people rightly dislike culture wars. It’s far better if we can make it so that, as George Washington — citing Micah 4:4 — wrote to the Hebrew Congregation of Newport, Rhode Island, “Everyone shall sit in safety under his own vine and fig tree, and there shall be none to make him afraid.”

But what happens when some are determined to recruit other people’s children or use coercion to alter how adults wish to live their lives? As the Hanukkah story teaches, the only thing worse than a culture war is surrendering the freedom to live by your values without a fight.

By fighting the imposition of Greek culture and religion, the forces of Judah Maccabee preserved the freedom of Jews to practice their faith and raise their children with their own values. Those who today wish to resist having their children or themselves forced to embrace certain values need to imitate Judah’s steadfastness. And thankfully there is no foreign occupying army to be defeated for lovers of freedom to prevail, so there is no need to imitate Judah’s violence.

Let us hope and pray that our efforts will be successful, as were those of the ancient Israelites, and we can usher in two millennia more of American liberty. At this time of year we value peace among men, but we also remember the need to fight for freedom.

4 thoughts on “Opinion: Here’s what the Hanukkah story can teach us about today’s culture war”