Motivated in part by the “Second Amendment Sanctuary” movement that has seen more than 100 Virginia counties and cities pass measures denouncing — and in some cases, preemptively refusing to enforce — constitutionally suspect gun laws, some Virginians at the rally began chants of “We will not comply.”

Many gun control advocates have denounced these chants (and the Second Amendment Sanctuary movement itself) as undemocratic and anti-American. While this reaction was predictable, voicing a collective refusal to comply with laws perceived as unconstitutional or unjust is a fundamental part of American democratic discourse. 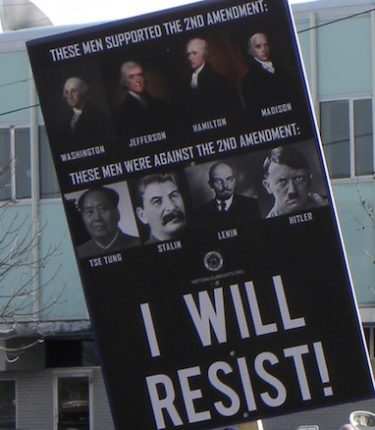 Threatening noncompliance is not unique to modern gun owners, nor unique to modern American discourse. “We will not comply” is neither an undemocratic threat nor an un-American resolve.
It is a long-standing part of democratic discourse, and an utterly American promise to strive for compliance with a higher law.

In fact, the mantra “We will not comply” helped set the stage for America as it exists today.

In 1765, the British Parliament passed the Stamp Act, which imposed a tax on nearly every piece of paper used by the American colonists. The colonists considered this a direct tax on them without the approval of the colonial legislatures — a flagrant violation of longstanding legal precedent and an affront to their rights as Englishmen.

Americans routinely circumvented or ignored bans on the importation of firearms and powder, and eventually resorted to armed defensive action against British attempts to confiscate guns and powder stores from colonial communities.

Noncompliance with federal laws mandating the return of escaped slaves was rampant throughout northern states prior to the Civil War. In 1850, the Vermont Legislature went so far as to pass a law effectively requiring state judicial and law enforcement officers to act in direct opposition to the federal Fugitive Slave Law.

Even in jurisdictions that did not act officially act to condone noncompliance, individual noncompliance with federal slave laws was nonetheless widespread. Moreover, a generally lax approach to local enforcement in the North raised the ire of Southern states, where calls abounded for the federal government to send in military units to ensure adequate enforcement.

Importantly, many abolitionists refused to keep their intentions quiet—they, too, were vocal about their refusal to comply with laws they considered both unconstitutional and morally unjust.

“We will not comply” was very much a general refrain of the now-beloved abolitionist movement.

Noncompliance permeated democratic discourse throughout the 20th century, as well. Some of the most revered figures of the civil rights era were actually brought to the national spotlight by acts of noncompliance.

Of course, America’s history with noncompliance and civil disobedience has also been complicated. Not all acts of noncompliance are later held to be meritorious. Many times, one side’s appeal to a higher law is another side’s accusation that the rule of law has been betrayed.

Noncompliance with school integration orders resulted in sometimes-violent standoffs among local, state, and federal agencies, and history has not treated these acts of noncompliance kindly.

Noncompliance with alcohol laws during the Prohibition era helped foster the rise of gangster violence (though, interestingly enough, widespread noncompliance was one of the major underlying factors leading to Prohibition’s eventual repeal).

During the Vietnam War, an estimated tens of thousands of young draft-eligible men faced severe criticism and legal consequences for refusing to comply with what they perceived to be an unjust draft system that would send them to fight in an unjust war.

But the fact that history judges some acts of noncompliance more harshly than others does not negate the reality of history itself. It merely reminds us that threats of noncompliance should not be undertaken lightly. They should be based on well-reasoned and principled appeals that will withstand the judgment of our descendants.

“We will not comply” is neither an undemocratic threat nor an un-American resolve.

It is a long-standing part of democratic discourse, and an utterly American promise to strive for compliance with a higher law.

Originally published in the Washington Times.