CAVENDISH, Vt. — Local voters are set to join Vermonters from four other communities across the state in seeking to create “Second Amendment sanctuaries” to protect gun owners from laws that erode longstanding state and federal gun rights.

The drive to put the resolution to a vote on Town Meeting Day was led by Stu Lindberg, a local resident and member of the Cavendish Selectboard.

In an interview with True North, Lindberg said he simply presented the resolution to the board, and members approved the resolution unanimously with the understanding that the Selectboard does not necessarily endorse it, but will let voters decide the issue. 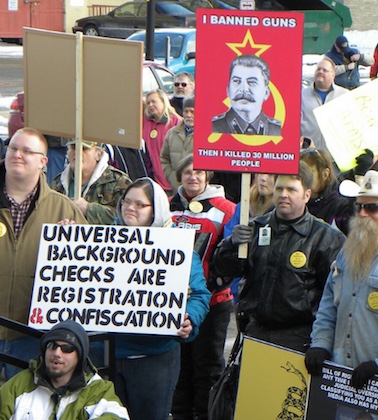 TAKING AIM AT GUN CONTROL: Communities across the state and nation are proposing resolutions that would declare their communities “sanctuaries” that protect gun owners from new gun control laws.

“The idea came from my concern over what’s happening in Virginia, and there’s this lack of understanding or even basic knowledge of what the Constitution says, and I find that our elected officials in Vermont and our congressional delegation has moved really far away from the original intent of the document,” Lindberg told True North.

If approved on Town Meeting Day, the resolution would declare Cavendish to be “a Second Amendment and Article 16, Constitutional Gun Owner township,” according to the text of the measure.

It continues that the township also would consider all federal and state laws and regulations attempting to restrict gun rights “null and void under this resolution.”

Lindberg explained that the resolution would not be able to supersede state law since Vermont is a “Dillon’s Rule” state, meaning that state law preempts town government.

“It’s a symbolic gesture to educate people,” he said. “The paradox of the whole thing is, it’s an emphatic statement that reiterates the supreme law of the land, both in the U.S. and Vermont.”

Communities across the state that have passed, or are working to pass, similar resolutions include Holland, Pittsford, Searsburg and Barton. The resolutions are being advanced in response to new gun control bills by state lawmakers that would prohibit gun owners from carrying “assault weapons” in public places, including houses of worship, public buildings, parks, theaters and stadiums, among other locales.

“The Gun Owners of Vermont enthusiastically encourages every town across Vermont to pass
similar resolutions. It is only through defense of our rights that we can maintain our
rights,” the group’s statement said.

The state’s leading gun rights group also has seen a change in leadership. Longtime president Eddie Cutler announced his retirement after 23 years leading the organization. He will be replaced by Eric Davis, of Roxbury, the group’s former vice president. Bob Readie, of Warren, will fill the vice president role.

Scott Ranney, a local resident of Cavendish and former candidate for the Vermont House, told True North that he supports the cause.

“The Second Amendment is being trampled on in Vermont because these progressives think they can get away with it and really it’s not constitutional,” he said. “I think this will send a message to the people that live in the towns and the state that’s something is going on and they need to get activated. … Maybe a key person will wake up and they will run for that office.”

Ranney said the reason gun control advocates are intent on restricting popular AR-15 semiautomatic rifles is because the guns are a modern-day equivalent of the muzzleloaders the American colonists used to effectively fight the British armies at the time of the Revolutionary War.

“They had a similar gun in their house as the army of England,” he said, echoing a popular view that the Founding Fathers adopted the Second Amendment to grant citizens power to defend themselves against tyrannical governments and despots.

Lindberg said resolutions involving climate and energy policy have appeared in recent years on the ballot during Town Meeting Day, and that this resolution is a demonstration of public discourse that dates back to the ancient Greeks of Athens during 504 B.C.

“I figure what better place than at Town Meeting to discuss this with my friends and neighbors and family, and that’s what drove me to sort of put it forth,” he said.

Last week, state senators in Virginia passed a “red flag” gun law that would allow authorities to remove guns from people deemed dangerous to themselves or others. The move encountered fierce opposition from gun rights advocates and lawmakers.

In Vermont this year, lawmakers are advancing H.600, which would require firearms dealers to file “suspicious activity reports” with the Commissioner of Public Safety on those who purchase or inquire about guns. Another bill, H.610, would force gun buyers to wait for the federal firearms background check to complete before taking home a gun, a process that can take between a few days to a few months.