The New Hampshire legislature has passed HB1178, a bill prohibiting “the state from enforcing any federal statute, regulation, or Presidential Executive Order that restricts or regulates the right of the people to keep and bear arms.”

The extended text is even more pleasing to defenders of liberty:

Federal Statutes, Regulations, and Presidential Executive Orders Relating to the Right to Keep and Bear Arms. Pursuant to the general court’s authority under Part II, Article 5 of the New Hampshire Constitution, the state of New Hampshire, a political subdivision of this state, or any person acting under the color of state, county, or municipal law shall be prohibited from using any personnel or financial resources to enforce, administer, or cooperate with any law, act, rule, order, or regulation of the United States Government or Executive Order of the President of the United States that is inconsistent with any law of this state regarding the regulation of firearms, ammunition, magazines or the ammunition feeding devices, firearm components, firearms supplies, or knives. Silence in the New Hampshire Revised Statutes Annotated pertaining to a matter regulated by federal law shall be construed as an inconsistency for the purposes of this chapter.

HB1178 does provide for cooperation with federal investigations into illegal activity or illegal use of firearms. It is not a blanket amnesty. No Wild West, though the Left will have framed it that way. 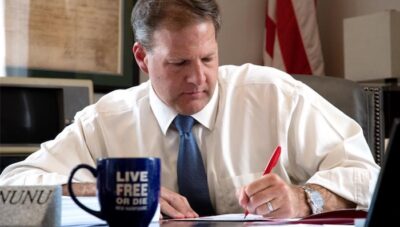 “HB1178 will go to the governor for his signature, and while he’s terrible on many issues, this isn’t one of them. Chris Sununu has been a strong supporter of Second Amendment rights. He is expected to sign it. And when he does, New Hampshire will have nullified federal overreach on the Second Amendment.”

As sad as the shootings and loss of life are, we find ourselves looking at one more example of a place where law-abiding persons are disarmed by the burden of ownership imposed by their government. One law-abiding citizen with some basic training could have changed the incident in Buffalo in several ways from ending the shooter’s ability to continue to murder to simply distracting them. You can’t proceed with your murder until you deal with the incoming.

Biden and the Beltway Dems are constantly pursuing restrictions on private ownership and possession of firearms. They want to turn every corner of the nation into Chicago, where, in May 2022, there have been 197 shootings and 37 homicides over 17 days. Someone gets shot in Chicago every three minutes and murdered every fifteen.

There have been at least nine “mass shootings” in Chicago in 2022 where four or more people were shot in a single shooting incident. If your threshold is two or more, that number jumps to 116 mass shootings.

Is this the first you’ve heard of that? Because Chicago’s “common sense” gun laws are the Left’s template for America.

New Hampshire is not waiting around to be disarmed.

HB1178 will go to the governor for his signature, and while he’s terrible on many issues, this isn’t one of them. Chris Sununu has been a strong supporter of Second Amendment rights. He is expected to sign it. And when he does, New Hampshire will have nullified federal overreach on the Second Amendment.

More states need to follow that example and not just on firearms. The states are the last line of defense against federal abuse of power.