J&J’s Corner Market closed its doors after 28 years on Saturday, April 30, leaving behind a family legacy and community staple.

“It’s just time,” said John Barton, owner of J&Js. John and his wife, Jocelyn, have operated the convenience store since its opening in 1994. J&Js came at the tail end of a 65-year-old family business, started by John’s late father, Walter Barton, in 1957.

Walter immigrated to Vermont from Germany in 1957, buying two restaurants and a pool hall upon arrival. After several relocations throughout the Burlington area, in 1973, the pool hall, Walter’s Game Room, settled at what later became J&Js. 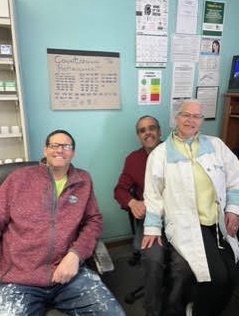 J&J crew poses in front of John’s countdown to retirement at J&J’s! From left to right: Walt Jr., John, and Jocelyn Barton.

John and his older brother, Walter ‘Walt’ Jr., worked at the pool hall when they were teens. Closing the store comes with mixed emotions for both John and Walt Jr.

“It’s bittersweet because it’s a connection to our dad who passed away when he was only 60,” said Walt Jr.

J&Js lease is up, and, John said, rising costs are making it difficult for small stores like his to compete. Product prices are increasing, which means higher costs for customers and lower profits for J&Js.

J&Js isn’t alone. Across the country, mom-and-pop stores are being squeezed out by corporate competitors with more buying power.

Throughout an interview with The Winooski News, the door chimed with people coming and going. Most bought tobacco and expressed their gratitude toward John.

In addition to tobacco, J&Js sold household staples like milk, eggs, and bread. Some customers expressed concern that its closure would leave a void.

“It’s a lot of the concern of the people coming in. They’re saying, ‘what am I gonna do when I need a gallon of milk?’” John said. “Part of me feels for some of the people, you know?”

A significant share of Winooski residents lives more than a mile from the nearest supermarket, considered a food desert by the United States Food and Drug Administration. Access to healthy foods is limited, particularly for those who don’t have reliable transportation. Winooski has had to get creative to access fresh food, such as the Vermont Food Bank’s VeggieVanGo.

J&Js lease was taken over by an A&A Asian Market, which is now open. They will offer a selection of dry goods, produce, refrigerated, and frozen items.

However, J&Js provided Winooski residents more than just tobacco and food. Brian Mecure, a 20-plus-year employee, reflected on the community cultivated at J&Js.

“There were days when I would come in even when I didn’t have to work, just to hang out with John. We would reminisce, talk to the people that came in, talk sports, talk Second Amendment, a variety of things,” said Brian. “Sometimes the people would drive me nuts, but sometimes they would brighten my day as well.”

Behind the register was a computer desk and a broken-in leather chair.

“I always had an open chair for somebody to visit,” said John, reminiscing with Walt Jr. and Brian on the many personalities who passed through and the friends who, over the years, became family.

John isn’t sure what’s next for his career, but after working nearly every day for 28 years, he’s looking forward to rest and more time with Jocelyn. “Maybe I’ll have a little Captain and ginger, just sit out in the sun, and just chill out,” said John.