The House of Representatives approved the budget by a 208-172 vote of that went mostly along party lines with Democrats voting against it. A companion bill that includes policy changes passed on a vote of 198-181. The Senate passed both bills on a 14-10 vote that also went along party lines, sending the budget to Republican Gov. Chris Sununu, who is expected to sign it.

Senate President Chuck Morse, R-Salem, described the spending package as a “conservative, fiscally responsible budget” that will benefit everyone in the state. 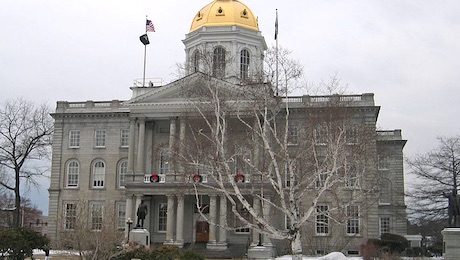 “We built this budget on Republican principles and reliable revenues, and in the process, we also made certain we took care of the people of New Hampshire,” Morse said.

The spending plan includes a buffet of tax cuts, reducing the meals and rooms tax, as well as the business enterprise tax and increasing the filing threshold for the business profits tax.

But Senate Minority Leader Donna Soucy, D-Manchester, called the budget “extremism at its worst” and said Republicans have chosen to “turn their back on their constituents.”

“This budget tramples on our state and national constitutions by infringing on Granite Staters’ right to free speech, it ends New Hampshire’s unbroken tradition of protecting women’s bodily autonomy, and it turns my home state into a place I no longer recognize,” Soucy said in remarks ahead of Thursday’s vote.

A provision of the budget would prohibit doctors from performing abortions after the 24th week, including in cases of fetal health, rape or incest. The measure provides exceptions if the mother’s life is at risk.

Supporters say the changes will put New Hampshire in line with a majority of other states that restrict the procedure after the third trimester. Critics say the move will jeopardize women’s reproductive health and result in an exodus of physicians who would fear being labeled as criminals.

Other controversial provisions of the budget include a massive expansion of the school voucher program, a prohibition on teaching “divisive concepts” on race and ethnicity in public schools and limits on the governor declaring a state of emergency.

Sununu has publicly supported many of the tax proposals in the budget and said he won’t veto the bill over policy changes added by GOP lawmakers. He is expected to sign it.

“Historic tax cuts, property tax relief, and Paid Family Medical Leave delivered all in one sweeping action is a win for every citizen and family in this state,” Sununu said in a statement after the measure’s passage on Thursday.

Last year, when Democrats controlled the Legislature, Sununu vetoed a budget because of spending items he disagreed with, forcing the state to operate on an interim budget.

Craig Brown, executive director of the group Amplify New Hampshire, said the spending plan includes “a wishlist of extreme policy priorities” that will set the state back decades.

“This budget is a disaster for New Hampshire families,” he said. “It shifts funding away from New Hampshire public schools through a voucher program, slashes taxes for large corporations and the wealthiest individuals, and places severe restrictions on a woman’s right to choose.”

Deb Howes, president of the New Hampshire chapter of the American Federation of Teachers, said schools, students and property taxpayers “will bear the brunt of this for years to come.”

“The budget not only cuts hundreds of millions of dollars of public education funding but, to add salt to the wound, diverts millions of taxpayer dollars to mostly unaccountable private schools through vouchers,” Howes said.

Sununu has 10 days to approve the spending bill, veto it, or allow it to become law without his signature.