“This guy Gerald Malloy is within 6 points of him,” the nationally syndicated radio host said on his show last week. “When I heard that, that’s when I began to think maybe something was going to happen in this election.” 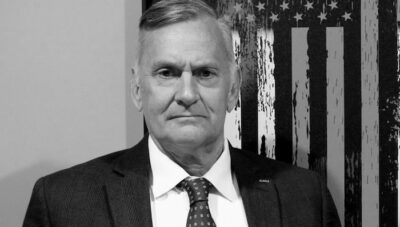 Carr’s enthusiasm for Malloy stems from the possibility of an upset running against  Welch, a long-established veteran in Washington, D.C.

“This is a real citizen candidate here,” Carr said. “… I think you could assume if Gerald Malloy wins Vermont that it’s going to be a tidal wave, a tsunami of biblical proportions.”

An upset would mark the first time in decades that a Republican from Vermont was voted into Congress.

On the program, Malloy shared some of his extensive military background: 22 years in the Army and retiring with the rank of Major. He said he served all over the world and is a combat veteran. Malloy also spent five years in various government agencies around Washington, D.C., and another 11 years in business.

On Democrat leadership regarding the record high energy prices, Malloy said “it’s been inflicted on the American people when they want an unconstitutional mandate to kill the oil/gas industry. … We could be self-sufficient but we’re not.”

Carr offered some thoughts on this matter, saying that while natural gas critics point to costs rising, that’s because drilling has largely ceased under the Biden Administration, and much of what is produced in the U.S. ends up getting shipped to Europe. Malloy reflected on these developments.

“Yes, we stopped the [construction of new] pipelines and we put up barriers to production and development,” he said. “We had independence, we had a surplus, and we signed that away.”

Carr and Malloy discussed how Democrat policies such as defunding the police have taken away from the safety of Vermonters.

“It’s really sad for me to go around and hear from folks in Burlington and other cities, Brattleboro and Bennington, that they don’t want to go out at night anymore,” Malloy said. “… That’s all from defunding the police and the progressive prosecutor movement. … One of the my things that I’ve talked about supporting is our law enforcement community and I even talked to a state trooper, we’re short 80 state troopers.”

The GOP candidate also has a new ad on social media. While it’s a brief 30-second clip, the ad hits on what’s been at the top of voters’ concerns: inflation. The ad claims suggests that under Democrat leadership there has only been more spending.

“The United States is over $30 trillion in debt while Washington has a spending problem and has continued to put our children and grandchildren further into debt,” Malloy says in his latest ad. “When I decided I needed to run for U.S. Senate, I knew that we had to get our country’s inflation under control and our economy back on track.”

Vermonters have a choice this November: We can continue down this dangerous path, or we can choose to fight against the status quo pic.twitter.com/ZkWubmJ9H0

Malloy’s enthusiasm remains high going into the final month before the general election.

“We are going to shock the country this November,” he said in a recent Twitter post. “Vermont will elect a Republican Senator to bring change to Washington.”

The host asked if the GOP has a chance to take back both chambers of Congress this November. He said yes.

“I see it happening, and I get that feeling from Vermonters,” Malloy said. “They are upset, it’s about the economy and we’ve been led to a very bad state of the union and it’s about common sense, too. I mean 40-year high inflation, record gas prices, we are in a recession.”