More town clerks are expressing concerns about a proposal to mail ballots to every registered active voter on the state’s checklist.

The General Assembly passed a bill earlier this month that would take the governor out of the decision to send mail-in ballots to all registered voters, clearing the way for a universal vote-by-mail system this fall.

Secretary of State Jim Condos devised the plan allegedly to help minimize the spread of the coronavirus for the general election, even though the August primary election will be conducted in person.

On Wednesday, Gov. Phil Scott said he expects to sign the bill if it reads “as planned.” 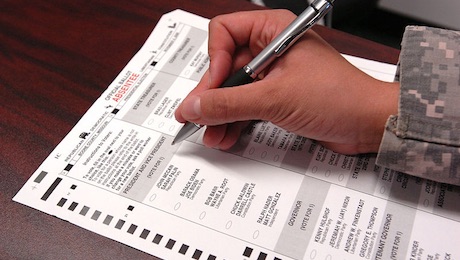 VOTE BY MAIL UNDER SCRUTINY: While many town clerks endorse the idea of expanding vote-by-mail, many do not, for a variety of security-related reasons.

Dawn Dwyer, town clerk for Lyndon, told True North in a recent interview that while she sees the need to be cautious about the virus, there’s no way to know who votes in a mail-in election.

“[You can’t know] unless they are lifetime town voters [and] you’ve worked the polls for 20 years and you recognize their handwriting,” she said.

Under the current system in Vermont, when a voter requests a ballot, the person will often visit the town clerk’s office and provide a signature that can be compared to the one on the returned ballot later.

However, when a ballot is requested by phone or online — or simply mailed out to every registered voter from the Secretary of State’s Office — no signature is captured for comparison.

Dwyer said Lyndon has had problems with absentee mail-in ballots in the past.

“There were issues a few years back where political parties were requesting absentee ballots for individuals, so we were sending them out when we received the requests. But we did have some voters who said ‘I did not request it,’ and those are staunch voters who want to come in and vote in public,” she said.

She added that people are allowed to request ballots for others, but that a third party must state who they are and what their relationship is with the voter.

For the August primary, which will not have ballots sent out automatically, the secretary of state is planning to send out postcards to inform voters that they may request a mail-in ballot if they wish to vote by mail.

George Blakeslee, the town clerk for Guildhall, said he’s OK with postcards informing voters about how to request and fill out absentee ballots. However, he’s not in favor of sending ballots out to everyone if there’s no request.

“We’ve had cases up here where people who own second homes somehow get on the checklist, and we find out that they’ve voted in two states, and they’ve been prosecuted and had jail time,” he said.

Asked what happens if a ballot falls into the wrong hands and gets voted fraudulently, Blakeslee replied, “They are gonna sign it, and you have all the authority and law if you can demonstrate that that’s a forgery. Then you’ve got yourself a case against the person.”

He added that his town has seen cases of mail-in ballot abuse.

Lynette Deatte, town clerk for the Town of Jay, also has concerns about expanding mail-in voting.