A week ago I discussed President Trump’s announcement of an EPA rule change, freezing the vehicle fuel economy standard at 37 miles per gallon in 2020, instead of letting it shoot up to the 54.5 miles per gallon by 2025 as decreed by the Obama administration. 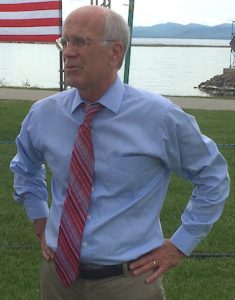 Our Congressman Peter Welch, ever agreeable to bashing Trump, issued a press release doing just that. I suspect, but can’t prove, that the release was prepared by the House Democratic caucus for all Democrats to send out to an eager world.

In his release, the congressman declared that “consumers are demanding greater fuel efficiency in vehicles.” Oh? That probably caused some amusement in Detroit, where the auto makers have been forced to build small cars that consumers don’t want, unless their price is subsidized by jacking up the prices on the pickups, vans and SUVs that they do want to buy.

If “consumers are demanding greater fuel efficiency in vehicles,” what’s stopping them from buying all-electric Teslas? Especially when they get a $7,500 Obama credit for doing so?

If consumers are demanding bacon cheeseburgers, then Burger King, Wendy’s and McDonald’s will deliver them.

If the congressman boldly said “the reason for high government fuel economy requirements” is to fight “the menace of climate change” by getting people into smaller, lighter, less comfortable, overly expensive cars, complete with range anxiety and recharge trauma, which would otherwise sell only to affluent climate change worriers,” I could at least respect that for candor.

Images courtesy of U.S. House of Representatives and Bruce Parker/TNR