“It’s a big day for trade, a big day for our country. A lot of people felt we’d never get here,” Trump said. “They use to call it NAFTA. We’re going to call it the United States-Mexico Trade Agreement. 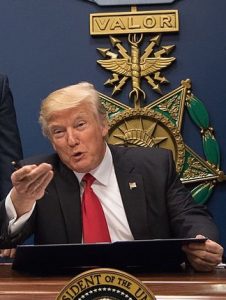 President Donald Trump on Monday announced his decision to end NAFTA and replace it with the “U.S.-Mexico Trade Agreement.”

“We’ll get rid of the name NAFTA. It has a bad connotation, because the United States was treated very, very badly for NAFTA,” he said.

NAFTA consisted of the United States, Mexico, and Canada. Trump said he wanted to include Canada as well in a replacement trade pact.

“One way or another, we’ll have a deal with Canada,” Trump said. “It’ll either be a tariff on cars, or it’ll be a negotiated deal. Frankly, a tariff on cars is a much easier way to go. Perhaps, the other would be much better for Canada.”

U.S. Trade Representative Robert Lighthizer said the agreement would be in place for 16 years, but come up for review every six years to decide whether it will be renewed at the end of 16 years. That is to allow for continuous negotiation while a deal is still in place.

Lighthizer described the “agreement formerly known as NAFTA” as a “bilateral agreement that Canada is welcome to join.”

“This is something very positive for the United States and Mexico,” Pena Nieto said, adding his interest in seeing Canada join.

Trump said he also spoke with Mexican President-elect Andres Manuel Lopez Obrador, who was involved in some of the negotiations.

Pena Nieto said, “I send you an affectionate hug. And all my greetings to you and my regards.”

Trump responded, “A hug from you would be very nice.”

Some of the provisions include new “rules of origin” requirements to incentivize billions of dollars a year in vehicle and automobile parts production in the United States, according to the White House, as well as new commitments to reduce trade-distorting policies for agricultural goods, stronger intellectual property protections, and more transparency.

The White House contends that NAFTA contributed to the United States’ trade deficit, which grew from $115 billion in 1993, the year before NAFTA’s implementation, to nearly $800 billion in 2017.

The agreement between the U.S. and Mexico is a positive sign that some of the issues have been resolved, said Tori Whiting, a trade economist with The Heritage Foundation. Whiting said, however, that NAFTA has made the U.S., Mexico, and Canada world leaders in manufacturing, especially in the automotive sector, and the new deal could adversely affect that.

In a statement, Whiting said:

Bilateral efforts to increase the rules-of-origin requirements to 75 percent from 62.5 percent are counterproductive to the goal of easing trade and increasing productivity and competitiveness in the region.

Additionally, including wage requirements for automotive manufacturing would be an unnecessary regulatory burden for producers in all three countries.

It could cause an increase in the price of new cars and negatively impact investment in the sector.