BURLINGTON — An East Montpelier resident pleaded not guilty to charges by a federal grand jury that he illegally purchased guns while he was alleged to be a heroin and cocaine user.

On Wednesday, United States Magistrate Judge John M. Conroy ordered that Michael Bernier, 34, be detained pending trial after he denied allegations that he illegally purchased two semi-automatic pistols from R&L Archery in Barre while being a drug user. 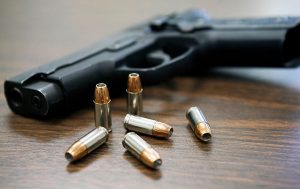 NO DRUGS AND GUNS: Federal law prohibits the use of illegal drugs if you are attempting to purchase a firearm. The penalty for a violation can be up to 10 years in prison.

A federal grand jury indicted Bernier for “possession of firearms while being an unlawful user of heroin and cocaine base and making false statements regarding his drug use when purchasing the firearms,” according to a statement from the U.S. Department of Justice.

While charges contained in the indictment are merely accusations, and the defendant is presumed innocent until proven guilty, Bernier faces up to 10 years in prison if convicted.

Court records indicate that Bernier bought two identical semi-automatic firearms between the dates of June 22 and June 23. According to the Department of Justice, the make and model is one “commonly used by firearm traffickers in the area.”

When the Bureau of Alcohol, Tobacco, Firearms, and Explosives contacted Bernier regarding the purchases, he told them that the guns had been stolen out of his car. Further investigation “revealed that Bernier was a user of heroin and cocaine base at the time of the purchases,” according to the DOJ.

Federal law prohibits users of illegal drugs from attempting to purchase firearms. According to Chris Bradley, president of the Vermont Federation of Sportsmen’s Clubs, gun purchasers are required to reveal personal drug use on a firearms transaction form when undergoing a federal background check.

The paperwork, known as form 4473, is submitted to a Federal Firearms Licensed dealer and checked by local and federal agencies. In addition to name, address and identification numbers, the form asks about a person’s criminal background and drug use record —  including illegal use of “any depressant, stimulant, narcotic drug, or any other controlled substance.”

The federal form also notes that “the use or possession of marijuana remains unlawful under Federal law regardless of whether it has been legalized or decriminalized for medical or recreational purposes in the state where you reside.”

While the statement from the Department of Justice doesn’t say how investigators concluded Bernier was “an unlawful user of heroin and cocaine base,” it does say the grand jury charged him with “making false statements regarding his drug use when purchasing the firearms.”

Bradley thinks that likely refers to the background check form.

“If you are lying on a federal form, it can come back and bite you,” he said.

Individuals making gun purchases must sign a statement acknowledging that “any false oral or written statement” with respect to the transaction is “a crime punishable as a felony under Federal law, and may also violate State and/or local law.”

Bradley said most criminals don’t bother to obtain a gun by filling out a 4473 form and undergoing a background check.

“[Everyone has to fill it out] except the ones done by criminals who aren’t going to follow the law anyway,” he said.

However, he said Vermonters who use marijuana legally in the state could face drug charges when filling out federal forms to purchase a gun.

Christina Nolan, the United States Attorney for the District of Vermont, noted that the prosecution is part of Project Safe Neighborhoods, a program aimed at uniting different levels of law enforcement and communities to reduce violent crime in neighborhoods.

In 2017, Attorney General Jeff Sessions urged that law enforcement use PSN to focus in on violent criminals. He directed all U.S. attorney’s offices to cooperate closely with federal, state, and local law enforcement entities.

The U.S. Attorney’s Office praised the Montpelier Police Department’s help in this case.