The cunning candidate who won six seats in the primary election has notified the Vermont Republican Party that he is withdrawing from five statewide races but will continue his run for secretary of state.

H. Brooke Paige, a resident of Washington, ran as a mere ballot “placeholder” to prevent Democrats from crossing over to nominate candidates during Vermont’s open primary. In the process, he won the Republican Party nomination for U.S. House, U.S. Senate, state treasurer, attorney general and auditor of accounts — offices he no longer seeks.

Republican candidate H. Brooke Paige: “My withdrawal is conditional on the Nominating Committee selecting well-respected, highly qualified and electable candidates to replace me through the nomination by committee process.”

Paige made his intentions known to party leaders and the public in spring, and now is asking the Vermont Republican Party to form a committee to nominate highly qualified candidates to run for those offices.

TNR has learned that former gubernatorial candidate Dan Feliciano, of Essex, has expressed interest in running for U.S. Senate, if the GOP nominating committee will accept it.

“I have received voluminous emails, calls, texts and IMs asking me if I would seek the Vermont Republican Party U.S. Senate nomination if H. Brooke Paige were to withdraw. … Yes, I will,” Feliciano posted Monday on Facebook.

Even though Paige is withdrawing from two congressional races, he continues to be a strident critic of U.S. Sen. Bernie Sanders, an independent, and U.S. Rep. Peter Welch, a Democrat.

“Peter Welch has become a senator in waiting … (and) Bernie is a charlatan, a socialist Pied Piper,” Paige said earlier this month at a candidates forum in Rutland.

In an Aug. 21 letter to Vermont GOP chair Deborah Billado, Paige announced he is withdrawing from five races, but with some conditions.

“My withdrawal is conditional on the (Republican) Nominating Committee selecting well-respected, highly qualified and electable candidates to replace me through the Nomination by Committee process,” Paige stated in the letter.

He told TNR he is running for secretary of state because he believes he can be a serious challenger against Secretary of State Jim Condos, a Democrat.

In various interviews this year, Paige has expressed frustration with GOP leaders for failing to recruit qualified candidates for statewide offices during the primary.

However, according to Vermont law, a nominated candidate who wishes to withdraw must do so within 10 days following the election — in this case, by 5 p.m. Friday, Aug. 24. The secretary of state has authority to remove candidates all the way up until the deadline for printing ballots ahead of the general election.

“It is my understanding of the statutes that once there has been an ‘election’ as confirmed by Secretary Condos — that the 10 day ‘time clock’ begins,” Paige wrote in his letter. “I think many have confused ‘election day’ which is not cited in the statutes with an ‘election’ which is.”

Paige also told Billado that he suggested an arrangement last week with Will Senning, Vermont’s director of elections, to enable the nominating committee to meet, and to “permit a timely withdrawal … and the submission of agreeable Nomination by Committee affidavits to the state elections division.” 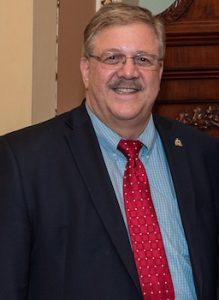 Secretary of State Jim Condos said he has no problem with H. Brooke Paige’s place-holding strategy in the 2018 GOP primary.

Condos told TNR on Thursday that he congratulated Paige on his successful campaigns and has no problem with candidates acting as placeholders.

“There is no law saying the same person cannot be a candidate for more than one statewide office,” he said.

According to Condos, it is also lawful for voters to write-in any person they want on a primary ballot, although write-in candidates tend to get fewer votes compared to registered candidates whose names appear on a ballot.

When TNR asked if voters can expect any changes to the primary election law in the future after the Paige affair, Condos replied, “That will be up to the legislature.”

Billado said the deadlines are tight if the party is to carry out Paige’s candidate substitution scheme.

“After Friday, the secretary of state won’t permit a candidate to withdraw — so Friday is the drop-dead date,” she said. “As we speak, I am not aware of Mr. Paige submitting anything to the Secretary of State’s office.”

Republican reaction to Paige’s victory in six races has been muted.

“I hope the party can fill those openings on the ballot quite soon. I will say this does create another first,” said Ed Larson, one of three Rutland County GOP candidates nominated for state Senate on Primary Day. 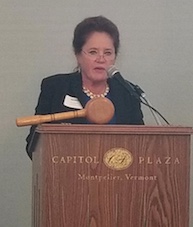 Vermont GOP Chair Deborah Billado: “Well, we can’t predict the future. This scenario could happen in two years, but I don’t imagine it happening again.”

Billado said if Paige gets approval to withdraw, the state party nominating committee will vote on replacement candidates to run in the general election.

“We have several candidates in the wing,” Billado told TNR. “I can’t name them yet.”

Billado said the GOP nominating committee represents all the counties in Vermont and is comprised of 100 members, including several at-large members.

“We’ll convene a nomination meeting and we’ll go one seat at a time — and there’s a voting process involved,” she said.  “We have people interested in senatorial against Senator Sanders and the congressional seat — those are the only two I know for sure. But I hear rumbles of others.”

Regarding the placeholder scenario happening again in 2020, Billado said she hopes it won’t repeat.

“Well, we can’t predict the future,” she said. “This scenario could happen in two years, but I don’t imagine it happening again.”

8 thoughts on “Republican H. Brooke Paige to withdraw from five races, run for secretary of state”