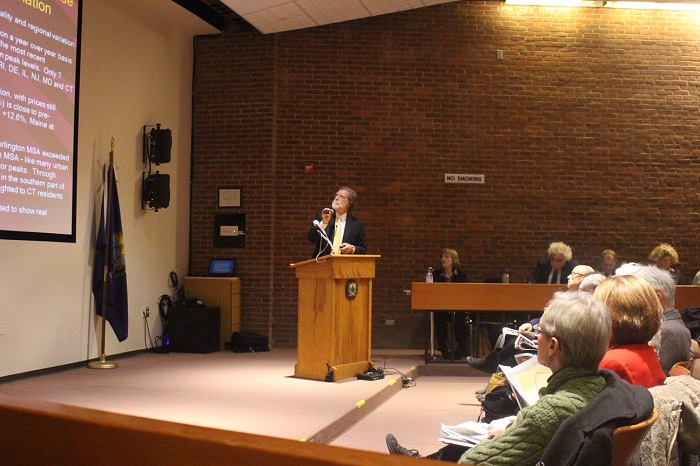 NO TRUMP EFFECT?: Legislative Economist Tom Kavet said the national economy as a whole is doing better, but he spent much of his presentation discussing whether it’s all going to fall apart soon.

MONTPELIER — For about an hour lawmakers and policy experts gathered at the Pavilion Building to hear a comprehensive report by Legislative Economist Tom Kavet on the state of the Vermont economy and how it fits into the larger national trends.

“I don’t think at this point we are seeing huge changes in what we would expect by the end of the fiscal year, so revenue is pretty much on track,” Kavet said.

He continued by noting revenues are up significantly: “The strongest area of the general fund is personal income tax revenues; they are up maybe 2 to 3 percent above targets.”

While the presentation generally acknowledged that the economy is in an upswing, at no point was President Donald Trump given credit for the booming national economy and stock market.

Secretary of Administration Susanne Young told True North last week that personal income tax revenues are up 4.2 percent for the year, and in 2018 — the first year after the GOP-led tax cuts were implemented — they were up 6.5 percent.

Despite all-time highs in federal revenue since those tax cuts, Kavet spent much of his presentation assessing the potential for a major economic downfall.

“Massive deficit spending via unfunded tax cuts have also pumped the economy, but with longer-term costs, as the national debt has soured at a time in the business cycle it would be expected to recede,” he said. “This could limit counter-cyclical fiscal policy in the event of another recession.”

Kavet said the biggest risk to the continued economic expansion is Trump’s trade war with China.

“It’s clearly the trade wars,” he said. “It’s very difficult to know where we’re at at any point in time, a lot of it has been conducted by Tweet and so far it’s lowered exports and imports, but not created more domestic production.”

Kavet continued to break down all the different facets that play into the health of the state and national economy. For instance, he explained how the Federal Reserve money-printing policy is affecting housing prices.

“There’s been a series of quick drops in interest rates and that has had [a positive effect] and housing prices are again picking up,” he said. “We’re seeing a lot more of existing home sales, we’re seeing other credit-sensitive sectors doing better, and so that’s been something of a life-line.”

Kavet pointed to a survey of 75 economists by the Wall Street Journal in which a third of them predict a recession by next year and 100 percent predict one before 2025.

As far as consumer confidence is concerned, interpretation of the data depends largely on party affiliation, Kavet said.

“Those that are Republican are way more optimistic than those that are Democrats,” he said. “And the independents tend to be very close to about halfway in-between.”

Kavet made an observation about minimum wage laws and how that impacts real wages. He said while New Hampshire has no state minimum wage, which defaults to the federal minimum wage of $7.25 an hour, for the most part it hasn’t made a big difference from Vermont, where the state minimum is set to rise to $10.96 on Jan. 1.

“There are very few jobs that are below the Vermont minimum wage in New Hampshire because the prevailing market wage is a lot higher,” he said.

He added that while Vermont wages are jumping about 3 percent per year, that’s still relatively low when considering the state’s unemployment is at a record-low 2.2 percent.

Joint Fiscal Office Chief Fiscal Officer Steven Klein, who also spoke at the meeting, gave a broad overview of the state’s revenue versus expense situation. He said progress is being made on increased revenue and fewer deficits, but increasing retirement obligations for teachers and state employees is a looming problem.

“It’s going to take a fairly steep effort to try and ensure that we pay those down,” he said.

For example, $145 million of the 2018 general fund went to teachers’ retirement. Young said last week these costs are more than offsetting increased revenue.

“All the programs that we have just to fund them at our current service levels, we still have a gap even with this good news and this surplus,” she said.

Klein presented pie charts breaking down total expenditures, and education continues to be the biggest piece, totaling $2 billion, or about a third of the entire $6.1 fiscal year 2020 budget. The next biggest piece is Medicaid funding at just over $1.8 billion. The next two big spending items are transportation and human services, at about $600 million each.

8 thoughts on “Legislative economist says economy is up, but gives no credit to Trump”