“It is important to provide context in the memo discussing the member’s belief,” the draft documents said. “If they come to the meeting and begin by discussing concerns about safety, politics, etc., note that in the memo. Even if the member eventually states that it is a belief based on religion, note their first expression and how they moved from non-religious beliefs to religious ones.” 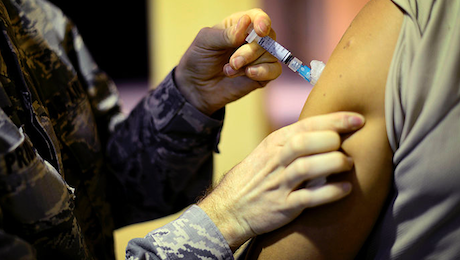 “Across the entire DOD the services are requiring people who have a religious objection to the vaccine mandate, if they submit a request for a religious exemption, to undergo a series of what they’re calling interviews with medical providers and chaplains,” Berry said in a Thursday phone interview.

“Note any comments made by the member that make it appear they are using the religious exemption as a ruse to avoid the vaccine,” the guidance continued.

The legal religious liberty organization First Liberty Institute obtained the documents from Coast Guard chaplains who wish to remain anonymous out of fear of reprisal, First Liberty told the DCNF. General Counsel Mike Berry said that Coast Guard military attorneys produced the guidance and sent it to the chaplains.

Under the Americans with Disabilities Act and Title VII of the Civil Rights Act, U.S. employers are required to accommodate their employee’s “sincerely held” religious beliefs — including potential religious objections to a vaccine.

“Across the entire DOD the services are requiring people who have a religious objection to the vaccine mandate, if they submit a request for a religious exemption, to undergo a series of what they’re calling interviews with medical providers and chaplains,” Berry said in a Thursday phone interview.

The Coast Guard did not immediately respond to requests for comment from the DCNF.

“This is one of the worst Establishment Clause violations I have seen in my lifetime,” Ethics and Public Policy Center senior fellow Roger Severino told the DCNF Thursday.

Severino, who served as the former director of the Office of Civil Rights at the United States Department of Health and Human Services (HHS), said that government bureaucrats “have no business being the arbiters of religious truth claims for any religion, let alone all religions.”

“These junior varsity inquisitors make atrocious theologians and their anti-religious freedom agenda is as clear as it is arrogant,” he added.

Under the draft guidance, chaplains are told to have members specifically describe how they “consistently keep the tenets of their faith” in their daily life and to “put the specific acts (or lack thereof) in the memo.”

“If the member indicates he/she is part of one of the following faiths, consult Table 1 and discuss with them the quotes from the religious leaders cited therein,” the guidance said. “Ask how their beliefs differ from those of the religious leaders. Note their response in the memo.”

Should a service member be Catholic, for example, the guidance suggests that the chaplain refer to the section “Catholic Christianity” on Table 1 and read a Vatican statement to the service member noting that it is “morally acceptable” to receive the vaccine.

If the service member is Muslim, the guidance suggests referring the service member to the “Islam” section of Table 1, which links to a March news report on 16 Minnesota imams getting vaccinated on camera “to make their message loud and clear.”

“Imam Hassan Ali Mohamud thought of a passage from the Qur’an,” the Sahan Journal report said. “Saving one person’s life is equal to saving all of humanity, according to the often cited passage. Which means it’s fairly easy to argue that receiving the vaccine is a religious duty, Hassan said.”

If a service member is not from an organized religion, the guidance instructs the chaplain to have that member explain “the underlying tenants and core beliefs of their faith, and how they practice that faith in their day-to-day life.”

“Ask whether they are also going to be refraining from any of these medications and from all products whose development involved fetal cells at some point,” the guidance continued. “Note response in memo.”

The guidance specifically references members who may be seeing an exemption by quoting the Bible passage, 1 Corinthians 6:19-20: “Do you not know that your bodies are temples of the Holy Spirit, who is in you, whom you have received from God? You are not your own; you were bought at a price. Therefore honor God with your bodies.”

If a service member references this passage, chaplains should ask “what steps they take to ensure that other foreign substances are not introduced into the body,” the guidance said.

The guidance continued: “For those members with visible tattoos, ask how they reconcile that act with their beliefs. Ask whether their religion supports altruism and protection of others, or making sacrifices to help others. If yes, ask whether they have considered that this act could be viewed as protecting others.”

U.S. Equal Employment Opportunity Commission (EEOC) guidance warns that “whether or not a religious belief is sincerely held by an applicant or employee is rarely at issue in many types of Title VII religious claims.

“For example,” the guidance said, “with respect to an allegation of discriminatory discharge or harassment, it is the motivation of the discriminating official, not the actual beliefs of the individual alleging discrimination, that is relevant in determining if the discrimination that occurred was because of religion.”

Neither the commission nor the courts should “be in the business of deciding whether a person holds religious beliefs for the ‘proper’ reasons,” the guidance said, but they may examine whether the individual’s motives or reasons for holding the belief.

An individual would not be deemed insincere in his belief just because he is not scrupulous in his observance, the guidance notes, but an employee’s credibility could be undermined by behaving “in a manner markedly inconsistent with the professed belief,” if the accommodation the individual is seeking would have a “particularly desirable benefit that is likely to be sought for secular reasons,” if the timing of the religious objection is suspect, or the employer has other reasons to believe the “accommodation is not sought for religious reasons.”