It is now nearly eight months since TJ Donovan denounced our state as systemically racist without investigating even the possibility that higher black incarceration rates are related to the drug trade.

The opioid crisis has unfolded in three waves — the first being from doctors’ prescriptions. The second two waves involved flows of heroin, and then fentanyl, to replace the prescription opioids. Is it possible that the increase in incarceration rates of African Americans in Vermont correlates to the cartel-led, inner-city-trafficked drug explosion that is sweeping our economically and culturally vulnerable Green Mountain State?

Here is a graph from an article titled “Here’s how black people actually fare in Bernie Sanders’ home state“: 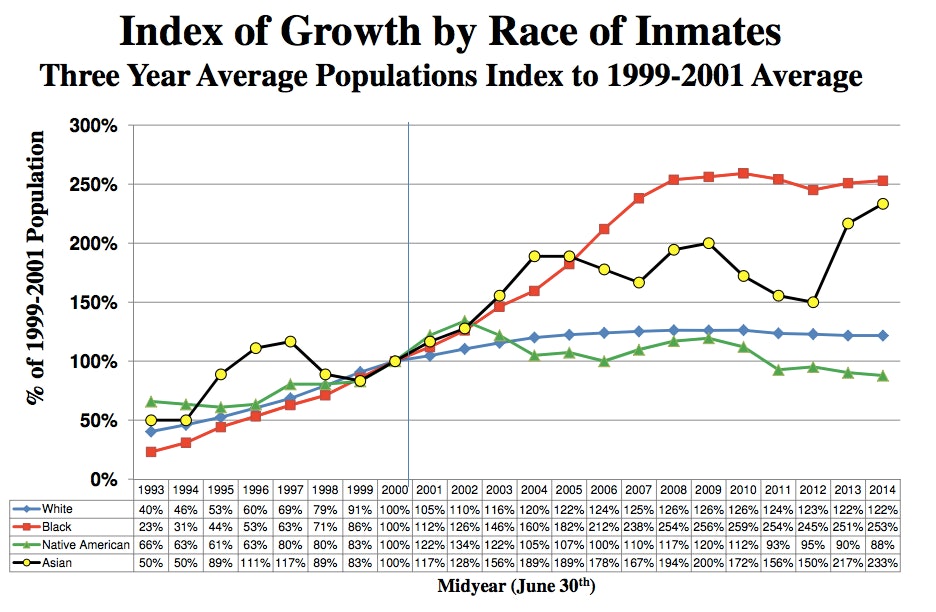 The article cited observes that “few criminal justice scholars or workers in Vermont seem able to explain how this happened,” and reports that Vermont’s defender general Matthew Valerio could not “point to specific policies that might have led to such rapid growth.”

“I have no information as to why,” Valerio said. “The simple answer is that there’s bias in the system. But it could also be coincidental.”

Without addressing the possibility of a drug trade link, the article concludes: “This does not mean that Vermont is uniquely horrible for black people. It simply means that Vermont is not exempt from the same manifestations of racial inequality that define the rest of the country, even if many Vermonters have trouble agreeing how it came about.”

Now read about the ethnic bill Scott signed for this new world: “We are creating a world where people don’t say ‘I don’t see color,’ but rather say ‘I embrace all of who you are.’”

The Civil Rights Act of 1964 ambitiously sought to federally regulate racism through the commerce clause of the U.S. Constitution — if people were denied service or mistreated, and that treatment impacted interstate commerce, then the federal government had jurisdiction. But Vermont’s attorney general, governor, and Legislature are legislating school textbooks based on children being bullied — is the argument that the textbooks are flawed or at fault? That the teachers must be reprogrammed and are at fault? That new textbooks will prevent bullying? (It sounds much more like institutionally inculcating a generation to feel guilty and blame themselves for past crimes. If they didn’t have white guilt, they sure will now.)

What I am saying here is that this new law is glaringly unconstitutional on numerous levels. Has a single voice of protest been raised under our Golden Dome? I pray that Vermont will have the discussion of race we have not had — as in, when it is wrong to call people or cultures racist without evidence; whether it is ever right to use government to change or regulate what people think; whether the higher incarceration rates of blacks are due to out-of-state origin or systemic racism by Vermont’s professionals. And how about this: Why are we the only state with Black Lives Matter flags at our schools? That organization is highly partisan and has ties to leftist anarchist groups. I am a student of Martin Luther King, not Malcolm X — what are Vermont’s students being taught to be?

VTDigger reported on June 18 that 95 percent of Vermont State Police stops are of white motorists, but that search and arrest rates are higher for blacks and hispanics: “Scott said he is deeply concerned by the disparity in searches and arrests between white and minority motorists. … ‘It’s sort of this total culture we are trying to go through,’ Scott said of the state police. ‘There is still a lot of work to be done and we are not satisfied.’”

If only Governor Scott were as deeply committed to supporting the police as he is of condemning them.

So in this final part of my mea culpa to Governor Scott, for an article published at American Thinker which said he labeled Vermonters irredeemably racist, I submit that he has been complicit in that process, including signing the bill that claims that our culture needs to be legislatively altered through indoctrination of schoolchildren. I agree with American Thinker’s title-writers that Phil Scott has claimed our Vermont culture is irredeemably racist.

Or perhaps I would simply employ Phil Scott’s explanation as to why he recently called President Trump’s tweets racist: “I don’t know him well enough to know whether they were racist and that’s the way he feels. … But again, does it really matter? The words are there, so whether it’s something he believes or something that he’s using for a politically strategy, both are equally bad from my standpoint.”

It is we Vermonters who are owed a mea culpa from our governor. Though I twice voted for him, Phil Scott has not represented me and my family — we have been betrayed on guns, race, immigration, free speech, abortion and drug interdiction. Phil Scott has abandoned all fealty to conservatism, to his own political party, to his loyal constituents and to his own culture.

He is not my governor.