A Brooklyn, New York, man accused of having submitted more than 1,800 false immigration applications has been indicted for 12 counts of making false statements on official immigration documents.

The U.S. Attorney’s Office for the District of Vermont announced July 18 that a federal grand jury is charging Arleigh Louison, 53, with running an immigration fraud scheme that involved more than 1,000 petitioners over a four-year period.

The Diplomatic Security Service arrested Louison at his Brooklyn home Monday and searched his office with a federal search warrant. Later in the day he had to appear in federal court. His arraignment hasn’t been scheduled yet. 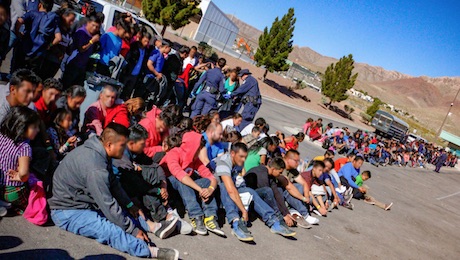 TRYING TO COME IN: A Brooklyn, New York, resident has been charged with falsifying information on over 1,800 immigration forms of people he was trying to help stay in the country.

According to the indictment, Louison made false statements on what is called Form I-360 petitions for status adjustments under the Violence Against Women Act (VAWA).

“In short, the indictment charges that Louison presented or caused the presentment of adjustment of status petitions containing false statements to the United States Citizenship and Immigration Services Service Center in St. Albans, Vermont claiming that the petitioners were victims of abuse,” a U.S. attorney’s office press release states.

It continues that the petitioners who paid Louison for his work did not discuss any abuse incidents with Louison, meaning parts filled out on the petitions regarding abuse were false statements. Louison also allegedly fabricated what is called fee waiver petitions, again including false information, without permission from those he worked for.

Alleging that women are victims of abuse makes it easier for persons to stay in the U.S. According to the Violence Against Women Act, persons who are a victim of battery or other cruel conditions by U.S. citizens can become eligible to be lawful permanent residents.

According to the press release, Louison was trying to obtain I-765 Employment Authorization Document or EAD cards so that the petitioners could find work while they are in the country.

The charges are accusations only, and Louison is presumed innocent unless and until he is proven guilty.

“The U.S. Attorney’s Office and its law enforcement partners prioritize prosecution of large-scale, complex fraud in all its forms. Profit-motivated immigration fraud is a serious offense, and we will treat it accordingly,” U.S. Attorney Christina Nolan said. “We thank our strong partners at DSS for consistently working so diligently with our prosecutors to hold white-collar criminals accountable.”

Assistant U.S. Attorney Nikolas Kerest is representing the federal government while Louison has yet to obtain an attorney.

Immigration fraud schemes are not unheard of at the national level, and a new Gallup poll shows that immigration is now the most important issue for 27 percent of voters.

“Gallup has asked the ‘most important problem’ question since 1939, and has done so on a monthly basis since March 2001. Over the past 19 years, only five other issues have been mentioned at some point by at least the 27 percent who named immigration this month.” Jeffrey Jones wrote for Gallup.