New Hampshire took top honors for a low crime rate in a recent study on how senior-friendly each state is across the U.S. But a higher-than-average cost of living and weather were negatives for The Granite State.

Financial analysis site Bankrate recently released an analysis on the best and worst states for retirement. New Hampshire, overall, ranked No. 15 among the 50 states. 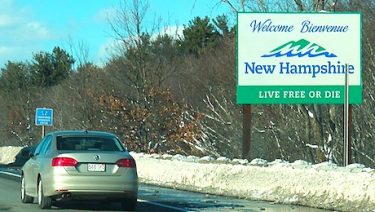 In the crime category, New Hampshire was ranked the safest state in the country for seniors in Bankrate’s analysis, sharing the top spot with neighbor Vermont.
New Hampshire also ranked highly for wellness, at No. 3, and culture, at No. 4.

Bankrate looked at a number of criteria as it sized up one state to the next on retirement-friendly features. Each state was ranked on five factors: affordability, crime, culture, weather and wellness.

Analysts with Bankrate reportedly combed through assorted data from outside sources before issuing the rankings.

Sources such as the Council for Community and Economic Research, for instance, were mined for cost of living data used for the affordability ranking, while the FBI’s 2017 Crime in the United States report was the basis for the look at how safe each state is.

In the crime category, New Hampshire was ranked the safest state in the country for seniors in Bankrate’s analysis, sharing the top spot with neighbor Vermont.

New Hampshire also ranked highly for wellness, at No. 3, and culture, at No. 4. The latter was tabulated based on data of persons ages 65 and up from the U.S. Census Bureau, which was used in comparison to the number of arts, entertainment and recreation establishments per capita.

While the No. 41 ranking for weather is a natural phenomenon that comes at the hands of being in the northeast portion of the U.S., the No. 39 ranking on affordability also dragged down New Hampshire’s overall average in the study.

Bankrate ranked each of the five categories differently. Affordability received the lion’s share, comprising 40 percent of the total score.

In a statement, Mark Hamrick, senior economic analyst with Bankrate, explained why affordability took a disproportionately higher amount of the weighted average.

New Hampshire historically has boasted a high senior population – and the trend is expected to increase, based on information from the state Department of Health and Human Services.

By 2030, more than one-third of New Hampshire’s population is projected to be age 65 and up, based on DHHS data.

To get a jump-start on the rising trend, agency officials recently embarked on refreshing a statewide plan on aging aimed at delivering the services the population needs. The review process included community surveys and other avenues for offering feedback.

Wendi Aultman, chief of DHHS’ Bureau of Elderly and Adult Services, said in a statement the behind-the-scenes work on revising the plan wrapped recently.

“It solidifies months of hard work, and we applaud the collaboration that took place across our state to make this happen,” Aultman said.

Florida, loosely considered the haven for many retirees, was among the top retiree-friendly states in Bankrate’s analysis, though the Sunshine State did not earn the top spot. That honor went to Nebraska, followed by Iowa, Missouri, South Dakota and, at No. 5, Florida.

The five least senior-friendly states in Bankrate’s analysis were Washington, Illinois, Alaska, New York and, at No. 50, Maryland.

One thought on “New Hampshire ranked 15th-most senior friendly state in study, but high cost of living among negatives”