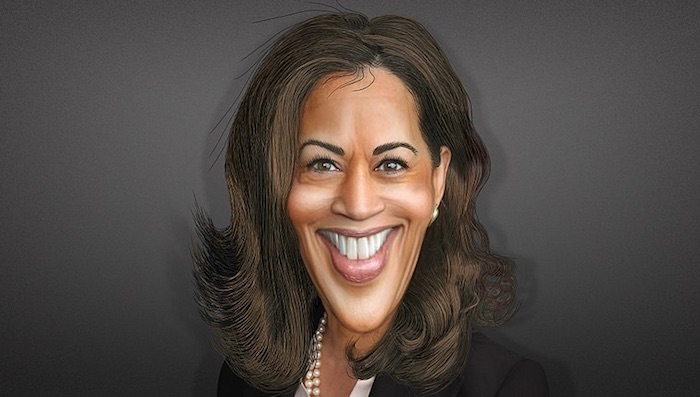 Since Kamala Harris has so consistently taken the wrong position in battles concerning public safety, her current histrionics serve as a predictive indicator that the FBI acted improperly — the opposite of her doublespeak.

The shameless hypocrisy of the Biden administration is on display through mouthpiece Kamala Harris, who has condemned widespread public criticism of the recent FBI invasion of President Donald Trump’s home. In the upside-down Biden world, all that is evil is hailed as good, and what is good is derided as evil. Since Kamala has so consistently taken the wrong position in battles concerning public safety, her current histrionics serve as a predictive indicator that the FBI acted improperly — the opposite of her doublespeak.

In an ironic if comical (Harris’s trademark) hearing America’s vice president intone against justifiable public calls for scrutiny of the political motivations of the FBI:

“I will say, as a former prosecutor, but as a citizen of our nation, any attacks on law enforcement are completely unacceptable,” Harris told reporters aboard Air Force Two on Friday. “And any so-called leader who engages in rhetoric that in any way suggests that law enforcement should be exposed to that kind of danger is irresponsible and can result in dangerous activities.”

This hypocrisy reflects a Harris pattern: turn law and order, and the rule of law itself, into a joke.  The bumbling vice president alleged a conflict of interest against William Barr, her proof being “I think the American public has seen quite well that you are biased in this situation and you’ve not been objective, and that would arguably be the conflict of interest.” Perhaps Americans have noticed her own biased lack of objectivity.

Kamala habitually bombs the wrong targets, and as a so-called leader engages in rhetoric that reliably gets the facts and law inverted every time. Here is a partial list of her plunging her inept partisan zeppelin into the wrong targets in the public fray.

Kamala roundly criticized the nation’s police after the Blake shooting, reversing the Rule of Law and agitating for more violence by praising BLM thugs as “peaceful” and their victim Kyle Rittenhouse as violent:

Harris sought to make a distinction between “peaceful protesters” and “those looting and committing acts of violence” and “a shooter who was arrested for murder.” … “Make no mistake, we will not let these vigilantes and extremists derail the path to justice,” Harris said.

Harris said: “Nothing that we have achieved that has been about progress, in particular around civil rights, has come without a fight, and so I always am going to interpret these protests as an essential component of evolution in our country –  as an essential component or mark of a real democracy. ….She continued: “I actually believe that Black Lives Matter has been the most significant agent for change within the criminal justice system.

After the Dobbs decision (which practically plagiarized Ruth Bader Ginsberg’s own assessment of Roe and Casey), Kamala freaked out, backwards: she called for “a new task force to address online harassment and threats” against pro-abortion women, while pro-life women faced threats such as “I hope you get raped so you can practice what you preach” and “If I ever see you pregnant, I’m going to shove you down a flight of stairs.”

A lawyer who rebels against the courts whose constitutional authority she swore an oath to uphold, Kamala bristled when the Supreme Court affirmed basic Second Amendment rights, tweeting “Today’s Supreme Court ruling on guns is deeply troubling as it defies commonsense and the Constitution. Lives are at stake.” Apparently criticizing the Supreme Court’s rulings is fair game: just not a politically weaponized FBI.

Kamala refused to condemn the assassination attempt against Bret Kavanaugh, despite having agitated against the Court and even hysterically claiming that same-sex marriage and contraception would be next, inflaming anti-Court sentiments:

… [Jesse] Watters noted that Harris’ silence comes after she rushed to throw her support behind now-disgraced actor Jussie Smollett when he claimed to be a victim of a hate crime that he in fact perpetrated against himself. ….”It didn’t take Kamala any time at all to come out and condemn the attack on Jussie Smollett, who is not a Supreme Court justice,” he said. “Oh, and also, that wasn’t a real attack.”

Which brings Americans full circle to yesterday’s call against any political questioning of the Trump-raiding FBI:

“It’s just highly irresponsible of anyone who calls themselves [sic] a leader and certainly anyone who represents the United States of America to engage in rhetoric for the sake of some political objective that can result in harm to law enforcement officers and agents,” Harris said.

If only she weren’t such a commie-kaze, given a new plane every time she plunges futilely into the sea of constitutional and factual reality.

Given her record on law and order, Kamala’s condemnation of critics should be prima facie grounds to investigate the FBI thoroughly, using an objective leader.