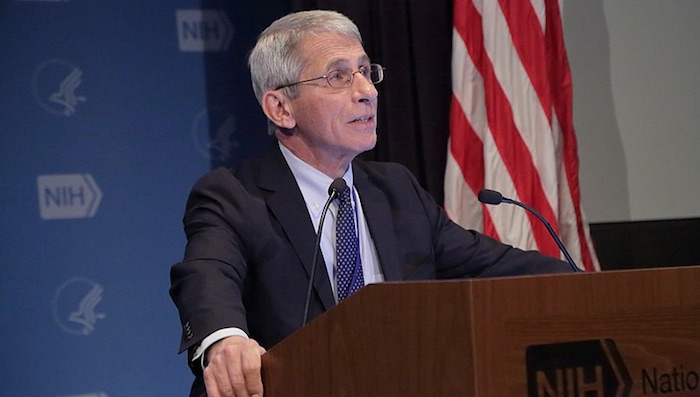 Dr. Anthony Fauci, director of the National Institute of Allergy and Infectious Diseases (NIAID) and the chief medical advisor to the president

Dr. Anthony Fauci recently made a bold declaration against “the sea of lies we are living in” — and then lied about the science of COVID-19 and vaccine protection. Not just a little lie: a massive misstatement of well-established scientific fact. Now he has proclaimed that the COVID vaccine will protect Americans to the same degree as the measles shot:

A virus cannot mutate unless it is replicating, and if you allow the virus to freely replicate chronically in society it will mutate. … If we can get the overwhelming proportion of the people vaccinated, as a nation … we will do very, very well. Just the same way as we’re all protected from measles because the level of protection in measles is very, very good in this country. It’s 90-some-odd percent.

Is he attempting here to suggest that experimental MRNA COVID-19 vaccines are as innocuous as the measles vaccine? He doesn’t say this, but by linking these completely different pathogens he is inviting false comfort. The two diseases differ tremendously: measles cannot mutate into new strains; COVID-19 most certainly can. Indeed, Dr. Fauci claims urgency in vaccinations to prevent exactly that:

“There’s a tenet that everybody knows in virology: a virus will not mutate unless you allow it to replicate,” Fauci told NBC’s Chuck Todd on “Meet the Press.” “Fortunately for us, the vaccines do quite well against delta, particularly in protecting you from severe disease, but if you give the virus the chance to continue to change, you’re leading to a vulnerability that we might get a worse variant.

Fauci’s analogy to measles protection is doublespeak: “….there is a near-zero probability for the natural emergence of a new measles virus capable of evading vaccine-induced immunity.”  Measles is especially “rigid” in its evolutionary design, employing a complex mechanism of “binding to specific cellular protein receptors as its doorway” past the natural human immune system.

Thus, it is impossible for America to ever be provided vaccine protection from COVID-19 equivalent to that achieved by measles vaccines. This doesn’t stop Fauci from stating that Americans will be protected “just the same way” as the nation is for measles — if only people will prevail “despite the sea of lies.”

Is the “science” really so baffling for the good Doctor F? COVID-19 is more akin to flu in its mutability:

Viruses that encode their genome in RNA, such as SARS-CoV-2, HIV and influenza, tend to pick up mutations quickly as they are copied inside their hosts, because enzymes that copy RNA are prone to making errors.

Annual flu shots are required because flu mutates so rapidly — this is also why flu shots are often of only limited protection.  While COVID-19 mutates more slowly than influenza, to compare it to the “rigid” virus measles, and suggest it can be similarly prevented for the future by a single vaccine, is astounding. Further critical thinking suggests that immunizing an infected population during a pandemic can also cause vaccine-resistant variants to arise. Instead, Fauci et al. conjure a make-believe world in which 100% of people who create variants are the unvaccinated.

When science is so brazenly fudged, it becomes frighteningly clear that this “new science” is really a new religion, warped like scriptures (only kept by the doctor-class clergy, who also decide what the Constitution says, and what legal rights all humans should have) into whatever meaning is required for the moment.

To comprehend Dr. Fauci in an American sea of lies, modern science grants access to the reasons why some people — even people in important positions of authority on which great trust is placed — lie as easily as breathing.  Scientific American uncannily hints at what might be percolating in the mind of Dr. Fauci:

Current thinking about the psychological processes involved in deception holds that people typically tell the truth more easily than they tell a lie and that lying requires far more cognitive resources. First, we must become aware of the truth; then we have to invent a plausible scenario that is consistent and does not contradict the observable facts. At the same time, we must suppress the truth so that we do not spill the beans — that is, we must engage in response inhibition.

The psychological processes witnessed in Dr. Fauci’s science circus reveal a person who is craftily lying, not unintelligently believing that measles mutates like COVID — just as he lied about gain-of function research.

When America’s health czar smugly condemns others as liars while denigrating the unvaccinated based on an abuse of vaccine science, who would trust a vaccine that was actually safe and effective?

John Klar is an attorney and farmer residing in Brookfield, and pastor of the First Congregational Church of Westfield. This commentary originally appeared at American Thinker.