This article by Christine Vestal originally published in Stateline, an initiative of The Pew Charitable Trusts.

By the end of this week, roughly half of the nation’s more than 50 million public school students will be back in class. But as parents stock up on notebooks and pencils, it’s still unclear in much of the country whether they’ll be sending their kids to school with masks.

In reaction to delta-variant-fueled spikes in new COVID-19 cases and hospitalizations in most states, the federal Centers for Disease Control and Prevention recommended in late July that all schools require students, teachers and visitors to wear masks.

States’ responses to the new guidelines since then have remained in flux.

Thirty-two states have left the thorny mask decision up to school districts and parents.

Arkansas’ law was blocked by a court last week even as lawmakers considered amending it. And on Monday, two Texas counties asked a court to issue a temporary restraining order against Republican Gov. Greg Abbott’s ban on mask mandates. 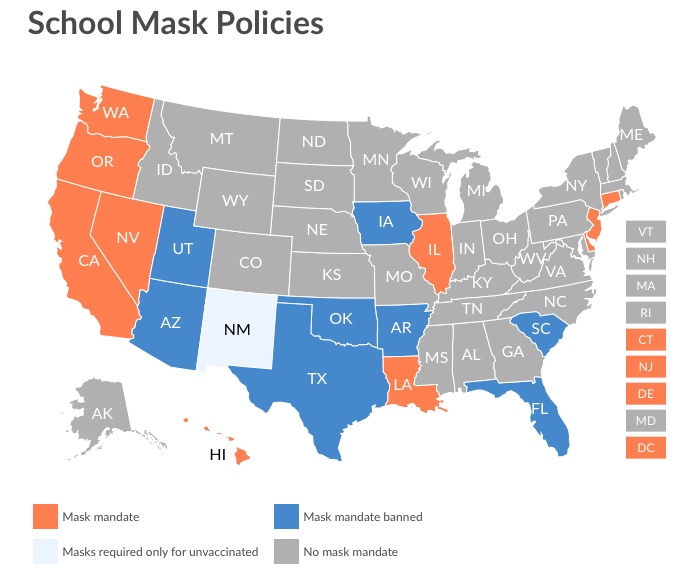 Ten states and the District of Columbia require everyone to wear masks in K-12 schools. Eight states prohibit any such requirement and 32 states leave the decision up to local school districts. (Source: Burbio, as of Aug. 9)

New York punted, releasing this statement from the state health commissioner on Aug. 5: “With the end of the state disaster emergency on June 25, 2021, school districts are reestablished as the controlling entity for schools. Schools and school districts should develop plans to open in-person in the fall as safely as possible, and I recommend following guidance from the CDC and local health departments.”

Virginia Democratic Gov. Ralph Northam pointed to a new law passed by the legislature July 1, which directs school districts to open in person in the fall and follow CDC guidelines to mitigate the spread of COVID-19, as effectively requiring schools to mandate masks.

Meanwhile, roughly 11% of the nation’s K-12 students had started school as of Friday. And in Arizona, Georgia, Hawaii and Mississippi, more than 80% started school last week. About half of Tennessee students went back to school and about a third started in Indiana, New Mexico and Alabama, according to Burbio, a New York-based research organization that’s tracking COVID-19 policies in schools.