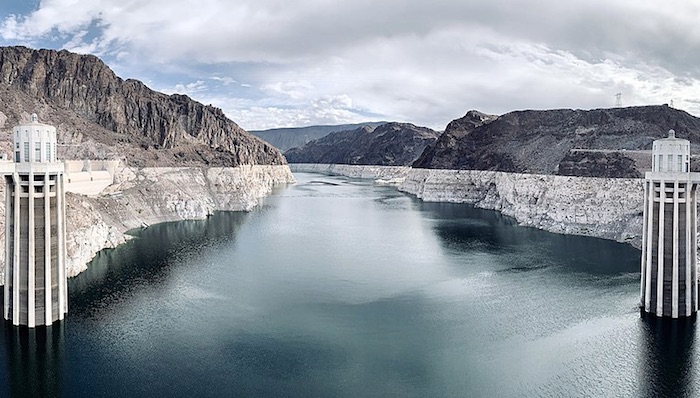 Lake Mead in October 2021, as seen from the Hoover Dam with the white band showing the high water level.

American population growth, and the steady expansion of industrial agriculture, have dangerously drained vital water from America’s largest aquifers. Federal subsidies of destructive monocultures, particularly corn for ethanol, have rewarded water-depleting agricultural expansion even onto poor and sloping soils. Meanwhile, exploding human populations starved for ever more new housing construction increase water demand for residential uses including watering of lawns and filling of swimming pools. The combined strain threatens a crisis of far greater magnitude than wildfires or bleached lawns — the American bread basket of food production is under threat.

The well-documented depletion of underground water aquifers has caused bountiful agricultural areas such as the San Joaquin Valley to subside tens of feet as groundwater is extracted. In addition, the surface waters of Lake Mead and the entire Southwest water system are now dangerously depleted, threatening electricity generation at dams, residential water supplies, and the ability of the nation’s most productive agricultural region to irrigate crops that produce nearly half of all the food Americans eat.

Lake Mead is shrinking faster than predicted by regulatory agencies, exposing encrusted sunken boats to the sky, and also human remains suspected of being deposited in the heydays of mobster Las Vegas:

Now just 30 percent full, Lake Mead has already fallen to its lowest level since it was filled during the Great Depression, raising fears in places such as Los Angeles, Phoenix and Tucson, Ariz., that also draw water from the reservoir above the Hoover Dam. … In Las Vegas, the obsession with the Lake Mead remains combines anxiety about the city’s dwindling water supply with the fascination over how mobsters shaped the Mojave Desert outpost into a glittering gambling haven, where pleasure-seekers float down lazy rivers and frolic in colossal pools amid the parched landscape. … Long-term drought and other changes to the landscape make more grim discoveries possible, and require planning for mass casualty events like deadly heat waves, storms and wildfires.

The “mass casualty event” notably absent from this list is crop failure. A perfect storm is brewing: in the absence of storms in America’s Southwest, that pleasure-seeking Green Miracle in the Nevada desert is being revealed as a mirage. Underestimation of draw-downs, coupled with sustained drought, is seeding not rain clouds but calamity. The effect of this crisis is compounded because the worse the drought, the less water is available for Lake Mead and other massive reservoirs; and the worse the drought, the more water is extracted for crop irrigation and residential uses.

The combination of a dry winter and hot spring has sucked massive amounts of water from Lake Mead. Government projections have proven overly optimistic:

As the drought has deepened, Lake Mead’s water level dropped below 1,050 feet elevation for the first time last week. … Lake Mead is already running well below what last year’s projections suggested, even in its worst-case scenario. In August, the bureau predicted the reservoir would most likely be at 1,059 feet at the end of this month, and 1,057 feet at worst.

The Lake has dropped several more feet since, exacerbated by cut-offs of water from similarly-suffering Lake Powell. The failure of these water supplies threatens agricultural production most of all:

Large scale farms in the West grow a variety of water intensive crops, including corn, wheat, and soybeans, which rely on spray irrigation from these reservoirs. … Agriculture in particular is one of the greatest demands placed on the entire Colorado River System — consuming nearly 80% of the basin’s water.

The agricultural region being served by this water supply provides year-round sustenance for millions of Americans across the nation. The San Joaquin Valley alone supplies some 12% of the nation’s table food, the Central Valley about 25%, and Arizona contributes substantially to national vegetable production. The region’s future looks grimly dry, and those government predictions are not comforting:

The latest forecast from the US Bureau of Reclamation shows the reservoir plummeting from its current elevation of around 1049 feet above sea level to around 1037 feet by this September. One year after that, in September 2023, it suggests Lake Mead will be 26 feet lower than its current level — just 19% of the lake’s full capacity and a level that would trigger the most severe water cuts for the Southwest.

Water cuts for the Southwest translate to reduced crop yields for the nation. Lake Mead is a barometer of an unsustainable water bankruptcy for America’s most productive agricultural region, at a time when inflation is ravaging fertilizer, food, and fuel prices like a raging flood. The combination does not bode well for food prices during midterm elections.

Much like the murdered corpses revealed by the receding waters of Lake Mead, the failed economic and monetary policies of the Biden administration will become more difficult to conceal as their consequences pummel food and gasoline prices yet further. Rainfall is beyond Americans’ control.  But solutions to fight the inflationary pressures that are inflicting economic drought on the nation must be precipitated at the ballot box.

5 thoughts on “John Klar: A perfect storm for crop failure”