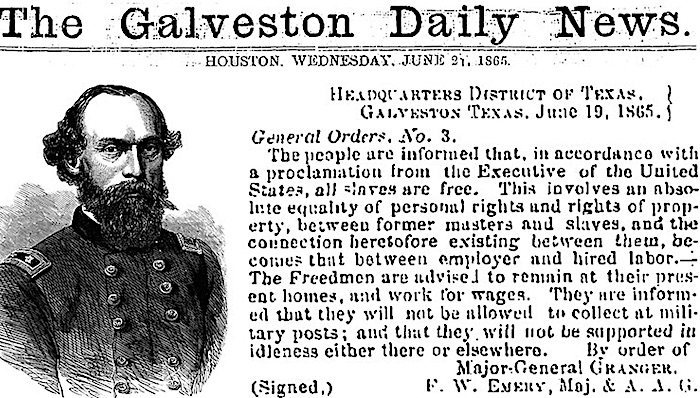 The people (of Texas) are informed that, in accordance with a proclamation from the Executive of the United States, all slaves are free’ — General Gordon Granger, The Galveston Daily News

June 19 may be one of the most important days of the year in Republican history. I’ll get in to the true reason for the celebration, but I want to start with a little backstory first. It was on this day in 1855 that a small gathering of like-minded abolitionists met in Washington, D.C., to express their frustration of the Kansas-Nebraska Act of 1854, which held open the possibility of expanding slavery to the newly formed territories. This group proclaimed themselves the “Republican Association of Washington, District of Columbia” and passed a simple four plank platform including the demand that “There should be neither slavery nor involuntary servitude, except for the punishment of crime, in any of the Territories of the United States.” In essence the Republican Party was born on June 19. And at its birth was their first ever platform, which was in essence the party’s first-ever campaign promise. The fundamental reason behind creating a new political party was for the purpose of abolishing slavery in this country.

Just one year later, to the day, the Republican Party held its first ever national convention from June 17 to June 19 in 1856.  This convention was planned a few months earlier in February by a gathering of five state parties; Ohio, Massachusetts, Pennsylvania, Wisconsin and our own dear Vermont. At the convention they nominated well-known U.S. Senator John Fremont to be their Presidential candidate. It’s worth noting that Abraham Lincoln came in second in the race for Vice President that year as well.

With that first convention and first presidential candidate the Republican Party came together to know exactly what their purpose was: the abolition of slavery.  It’s almost unthinkable today, that a political party could come out of nothing and within one year field candidates for the highest office in the land who would take second place, just 12% fewer popular votes than the winning presidential candidate in 1856, and then go on to win the presidency the next year when Abraham Lincoln took office in 1860.

As soon as Lincoln was elected — even before he officially took office — Republicans were taken so seriously in their commitment to protect the rights of Americans in bondage that Southern Democrats immediately started planning their response. Civil War ensued.

While Lincoln issued the original Emancipation Proclamation near the end of the war, which proclaimed that all slaves in southern states were to be freed on January 1, 1863, there was no power behind the proclamation. In order to put that proclamation in effect the Union would have to continue the fight for another few years until the South surrendered on April 9, 1965. But even then many southern slave holders had headed west to Texas, and taken their slaves with them. It took a few more months and the power of the United States Army to bring the efficacy of the Proclamation all the way to the west Texas town of Galveston.

It was there, on June 19, 1865, that General Granger read aloud the proclamation of General Order No. 3 which said, quite simply and directly, “The people of Texas are informed that, in accordance with a proclamation from the Executive of the United States, all slaves are free. This involves an absolute equality of personal rights and rights of property between former masters and slaves, and the connection heretofore existing between them becomes that between employer and hired labor.”

This is the day regarded by many as the day that the very last enclave of slaves were set free. It seems fitting not to celebrate the day that the Emancipation Proclamation was signed, or went in to effect in theory, but instead celebrate the day when it went in to effect, in practice, for the very last people in the uttermost reaches of our United States.

To me Juneteenth is an especially important for Republicans to observe and commemorate. That same date, June 19, shows the trajectory of our party from its very birth in the abolition movement to its maturity in keeping its promise and liberating more people than had ever been freed before — or perhaps since. June 19 is a day for promises made and promises kept.

It is a day to remind us, as Martin Luther King did, that “The arc of the moral universe is long, but it bends towards justice.” Our nation was born with a compromise between the North and the South that left slavery intact, despite a Declaration of Independence that begged for its eradication. It took another 80 years before all men would be free and the practice of our nation would more closely match its principles.

While some want to look at Juneteenth as a day that should make us ashamed that our country ever even engaged in the brutal practice of slavery to begin with, I look at it and see that despite our problems, we can have hope that we will correct our mistakes in time.

In the immediate aftermath of the Emancipation Proclamation going in to effect there was a rise of more black Americans not only becoming truly, personally, financially independent, but furthermore many of them became the first black congressmen or senators from Southern States. It was an incredible reversal of fortunes.

I can’t think of any great imbalance or lack of equity that has existed in our country greater than that between free men and slaves. And yet despite how widespread the practice was, and how utterly dependent the southern economy was, it was still turned upside-down in just one decade thanks in large part to our first Republican President Abraham Lincoln, and those early Republicans who laid the groundwork and fought to the end to ensure that the freedom they enjoyed could be enjoyed by all.