Massachusetts State Police are looking for Antifa activity in small towns in Berkshire County on the Vermont border, according to a memo from the Pittsfield, MA mayor to her City Council leaked to public radio station WAMC and reported last night.

Antifa is a shadowy organization of Marxist ideology whose adherents communicate and organize mostly online, and gather to demonstrate  —  sometimes with violence to people and property. In his 2017 book “Antifa: The Anti-Fascist Handbook,” Dartmouth College lecturer and Antifa supporter Mark Bray quotes Antifa leaders who portray free speech as oppression, condemn capitalism, and condone Antifa violence as self-defense and prevention against fascist takeover.

In the memo printed on WAMC, Mayor Linda Tyer writes: “You have most likely been following news reports about Antifa infiltrating peaceful protests and inciting violence and destruction of property. Earlier today, Massachusetts law enforcement officials convened an emergency zoom session to assess information that, during the next week or so, Antifa plans to leave major metropolitan cities and head to smaller cities and towns.” Accordingly, “you may see a greater presence of State Police in Pittsfield and surrounding towns.” 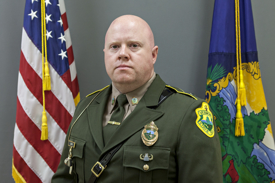 But Antifa may not be responsible, said Lt. Shawn Loan of the Vermont Intelligence Center, the anti-terrorism arm of the Vermont State Police. Massachusetts police may be acting on social media circulated by white supremacists posing as Black Lives Matter, he said. In response to a Vermont Daily inquiry about the WAMC report, Loan said by email Wednesday: “We are trying to stay ahead of any planned violence through tips and field intelligence. The article you provided appears to be based on a widely shared Tweet from ANTIFA_US which was later determined to be a white supremacist group working to disrupt through misinformation.”

Loan then cited a CBS news report purportedly debunking an Antifa threat to small towns. “In the event we learn of any upcoming unlawful or violent activity, we are in immediate contact with state, local, and federal partners to do our best to ensure public safety,” he concluded.

At a press briefing Wednesday, Public Safety Commissioner Mike Schirling said “We have no specific concerns about Antifa presence in Vermont, but we will continued to monitor.” Such monitoring consists of “taking intelligence from people in our community, and scanning what’s out on the internet,” Schirling said.

Vermont is not without its Antifa history and connections.

On March 2, 2017, speaker Charles Murray and a woman college professor were attacked by a group of masked assailants who fit the Antifa mode of operation and who were praised by the Burlington Antifa Facebook page: “Power to our comrades at Middlebury College! No platform for hate!” Murray was shoved, Prof. Allison Stanger had her hair pulled and suffered an arm injury requiring hospitalization, and the car they managed to get into was rocked back and forth by a mob.

Neither the Vermont media nor elected officials expressed outrage about the incident. A State House resolution condemning the act was introduced by Reps. Don Turner (R-Milton) and Heidi Scheuermann (R-Stowe). It  was ignored by the press and other House members.

Keith Ellison, an Antifa supporter and current Minnesota attorney general, was the deputy chairman of the Democratic National Committee when he appeared as the main draw at a November 2017 Vermont Democratic Party fundraiser in Burlington. Less than two months later he came under fire for making Tweets in support of Antifa and Bray’s book.

Three Vermonters who teach at Dartmouth have given Bray and his book their public support. Bethany Moreton of Fairlee, Annelise Orleck of Thetford Center, and Margaret Darrow of Vershire in the summer of 2017 and more than 100 other college professors and staff signed a letter supporting Bray and his positive portrayal of Antifa.

In his book, Bray singles out Trump supporters for harsh physical treatment: “Our goal should be that in twenty years those who voted for Trump are too uncomfortable to share that fact in public. We may not always be able to change someone’s beliefs, but we sure as hell can make it politically, socially, economically, and sometimes physically costly to articulate them.”

A ukelele player and selectboard member, an incumbent legislator from the Northeast Kingdom, and a former GOP candidate for governor are among the independents who have announced they will run for the Vermont Legislature as independents.

Essex Town selectboard member and ukelele player Andy Watts will run as an independent for the Essex/Westford House seat now held by Republican Bob Bancroft, according to the June 1 Essex Reporter. The incumbent is already being challenged by Democrat Alyssa Black.

Keith Stern, a 2018 Republican candidate for governor, is running as an independent in bluer-than-blue Windsor County.

“Some of you may recognize me as a candidate for governor two years ago.” he wrote June 1 on his Keith Stern for Windsor County Facebook page. “My platform has not changed: I want to see a more responsible budget, end Act 46, and make sure Act 250 goes back to its original goal and not become an excessively restrictive hurdle to responsible development.

Rep. Paul Lefebvre (Newark), vice-chair of the Natural Resources and Fish & Wildlife Committee, has been elected to three terms as a Republican. He announced in the May 27 Chronicle (the Northeast Kingdom weekly newspaper) he will seek re-election as an independent.

“I am running as an independent — a choice influenced by both temperament and a desire to place pragmatism over loyality to any party or political leader,” Lefebvre wrote. “I … still share the party’s strong belief in a decentralized government or one in which power is not concentrated at the top.”

8 thoughts on “In towns on Vermont border, Massachusetts State Police watch for Antifa”