Rushing to spend $1.25 billion in federal Covid-19 cash, Gov. Phil Scott reserved $5 million for mental health treatment. At least he realizes his governance in the coronavirus crisis has pushed thousands of Vermonters over the cliff emotionally as well as financially.

He’s caused uncertainty and pain through a reckless, unnecessary lockdown. Now we’re all having PTSD.

Humanity’s dealt with epidemics for thousands of years. Never, and I emphasize “never,” have leaders forced a healthy population into quarantine. It’s the sick and vulnerable who need to isolate. 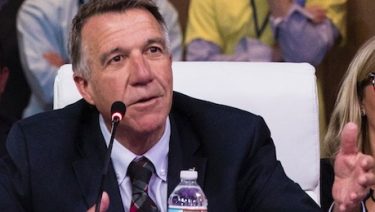 Governor Scott and his team failed on many fronts but three are epic. They point to cluelessness, incompetence and negligence.

He assembled a group of advisors with narrow, inappropriate expertise. Drs. Vespignani and Shaman specialize in mathematical modeling of health outcomes. Governor Scott relied on their models, which painted a speculative, inordinately grave picture of what Vermont’s Covid-19 prospects were.

Already in March, scientists and doctors at Stanford, Oxford, Rockefeller University and many other places were vigorously and correctly disputing doom-and-gloom models. Governor Scott does not appear to have considered these viewpoints.

When you’re depriving people of economic and personal freedom, threatening livelihoods, you need to get second, third and fourth opinions.

The choice isn’t between science and ignorance, or even between good and bad science. It’s between using cogitation — computer models — and using good judgment, practical experience, and real time data, with modeling a small part of the equation. Governor Scott and his team are still using math and technology rather than good medicine.

This is a bad academic trend affecting hard science, economics, political science and many other fields. Computers have replaced common sense, and statistics have replaced experience and thinking.

This is cluelessness. These people need to go. The fear peddling has to stop.

Governor Scott does not appear to have done any cost benefit analysis. What are the consequences of crashing the economy? Governor Scott said he was shocked by the numbers of people losing their jobs. Didn’t he think about that?

How many Vermonters will die because cancer and heart health screenings were suddenly unavailable for over two months? How many will die too soon because cancer patients feared getting their treatments? Emergency room visits are down because people are afraid to go to the hospital. The cost? A hundred lives? Five hundred?

Practicing doctors see these future nightmares developing. They cried for empty hospitals to be opened up. Governor Scott was unresponsive and not even curious.

How many Vermonters will fall into the trap of opioid, drug, spousal or child abuse because of the instability and worry Governor Scott’s policies delivered? How many innocent people will suffer, and how many struggling people will lose ground? Above his pay grade.

How many elderly Vermonters, isolated under lockdown and frightened, will deteriorate health-wise from loneliness? “Never thought about that one!”

How many of those “furloughs” will turn into permanent layoffs? Governor Scott never seems to have thought about that, either.

Governor Scott has trashed the hospitality industry. Will anyone want to plan a Vermont vacation or special event? He’s created a climate of unpredictability. That’s terrible for all business.

Did the lockdown save lives? A consensus now is developing all over the world that it didn’t. States that responded to Covid-19 in a less heavy-handed manner than Vermont have the same or better health outcomes.

Vermont’s schools have never closed for months on end because of a health emergency, or any kind of emergency, since public schooling started here in 1777. If something hasn’t been done for nearly 250 years, it’s usually because it’s a bad idea.

We’ve known for many weeks that Covid-19 affects the elderly and people with serious health problems and not kids, who rarely even show symptoms. We also know they’re likely the least contagious population.

“I’m sure they’ll be creative,” Governor Scott blithely said of teachers and parents when he upended everyone’s life by closing the schools.

Did Governor Scott ever consider how many Vermont parents are suited to homeschool kids or to supervise kids learning online? No.

How about those parents working from home? Can they be expected to monitor their kids’ learning and do the work they need to do to pay the bills? I know, there are still jobs Governor Scott’s lockdown hasn’t managed to kill!

How many kids have computer access issues? How many shuttle between parents’ or grandparents’ homes? How many homes have only one computer, or no computer?

When it comes to kids, is “more screen time” a good answer to any problem?

What about special needs kids? How disruptive will their learning be? How much academic backsliding will they, or any other child, face?

What’s the truancy rate? I know lots of teachers, and they’re telling me a good day is two-thirds attendance. Did it occur to Governor Scott that truancy might be a problem? Doesn’t seem so.

Teachers want to teach. They’ve been put in a terrible situation. Kids want and need to learn. Parents want well-educated children. They pay taxes for good schools. “I’m sure they’ll be creative” is another way of saying “let them eat cake.”

All of this adds up to negligence. For a K-6 child, missing three months of school is life changing. Forming good learning habits is disrupted. For second- and third-graders, reading progress will be undermined.

In the fall, a sixth-grader will have been away from math for almost six months. That child is in danger of sliding back to a fifth- or fourth-grade level. These kids will be playing catch up for years. Is that good policy?

This is playing with our children’s future and the future of Vermont’s economy, if we think a well educated workforce is important.

And what about the budget cuts for education and health programs needed to cut the big budget deficit? Governor Scott’s rich friends are all set. They don’t use a lot of state services. It’s the poor and working class people in Vermont who’ll suffer.

Vermont has a health emergency but it isn’t Covid-19. The state’s infection and death rate are minuscule. This has always been the case. We knew two months ago Covid-19 was largely a nursing home and New York metropolitan area crisis.

No, Vermont doesn’t have a Covid-19 epidemic. Instead, bad policy and leadership-by-fear have left us with a PTSD epidemic.