As the president of The Heritage Foundation and Heritage scholars have written elsewhere, the killing of George Floyd was unjustified and tragic.

In the days after Floyd’s death, Americans took to the streets in Minneapolis and other cities to express their frustration and anger. Unfortunately, many of these protests have metastasized into violence in several large cities and crossed the line from lawful to unlawful.

We are now witnessing, often on live television, acts of violence against innocent people, cars being torched, stores being looted, buildings set ablaze, and more. Rioters who loot and burn stores, homes, and buildings in minority neighborhoods are hurting the very people who already are at the lower end of the economic and social spectrum. 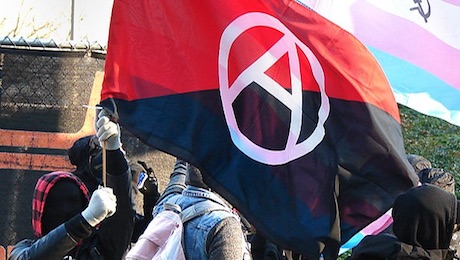 Antifa is a far-left militant movement now being designated a “domestic terrorist organization” following mass rioting, vandalism and looting in major cities across America over the past week.

These are all crimes under state law, and some of these actions may be federal crimes as well, as we explain below.

On Sunday, President Donald Trump tweeted that the administration would designate Antifa, the far-left militant movement, as a “domestic terrorist organization.” But the violence is not, from what we have seen and read, limited only to Antifa, as many violent thugs don’t cover their faces or hide behind the anonymity that typifies Antifa’s despicable tactics. This declaration can help, but it is not enough.

Attorney General William Barr issued a statement Sunday on “riots and domestic terrorism.” In it, he states, “The violence instigated and carried out by Antifa and other similar groups in connection with the rioting is domestic terrorism and will be treated accordingly.”

But what does labeling Antifa a “domestic terrorist” organization actually mean? Does federal law enforcement gain anything from such a designation?

First of all, it is important to understand that terrorism is a tactic. Some state and federal criminal statutes include the word terrorism, but what they really criminalize are acts of violence, like bombings.

A terrorist designation does not change the charges a federal prosecutor can make. They remain the same. However, it will certainly help prioritize attention and federal resources on Antifa and encourage better coordination among law enforcement authorities.

This is a good start, but there is more that can and should be done at the state and local level as we describe below.

Unfortunately, the words “terrorism” and “terrorist” have been used to describe an overly broad set of violent acts, from domestic abuse to bombings.

Due to the overbroad use of the term “terrorist,” the word itself has largely lost its meaning, resulting in a political and public disagreement on which organizations, if any, should be labeled terrorist, and why.

The term appropriately applies to Antifa.

(a) Involve acts dangerous to human life that are a violation of the criminal laws of the United States or of any State;

(c) Occur primarily within the territorial jurisdiction of the United States.

There is no federal statute, however, that assigns criminal penalties to domestic terrorism.

So what can be done to quell the riots and hold people accountable for the crimes they commit?

First, states and localities have the primary responsibility to investigate, arrest, and prosecute people who violate state law.

Many of these crimes have been committed in full view of the media. Many of these crimes are not whodunits. The perpetrators are proudly flouting the law, on camera. To the extent possible, local prosecutors and police can and should investigate these crimes, arrest the violators, and prosecute them.

The federal government can, and likely is already, play a role, given the scale and scope of the riots and violence, especially considering that it appears that some of this is coordinated and funded.

Barr has directed the network of 56 regional Joint Terrorism Task Forces to identify criminal organizers and instigators, and to coordinate federal resources with their state and local partners. That in and of itself is a big deal.

Barr also stated that the violent radical agitators will be apprehended and charged for their violations of federal law.

No doubt, the FBI will use many of the same investigative tools it used to investigate and solve the April 1995 bombing of the Alfred P. Murrah Federal Building in Oklahoma City. That too was a resource-intensive effort, but resulted in the perpetrator being brought to justice.

This crime is punishable by fine, up to five years’ imprisonment, or both. There are, no doubt, other federal crimes that may have been violated, depending on the particular facts and circumstances involved.

What happened to George Floyd was horrific and criminal. Speaking out against it is justified, as long as it is done peacefully. But when protest turns to violence, it perverts the calls for peaceful, nonviolent protest and endangers everyone.