MONTPELIER, Vt. — House lawmakers on Tuesday voted 90-51 on the governor’s second budget veto, falling short of an override and giving state leaders a week and a half to find an agreement or face a government shutdown. 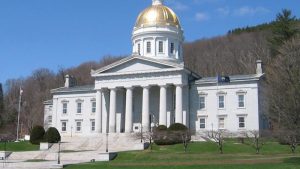 OPEN LATE IN THE SEASON: For now, Gov. Scott’s veto of the budget bill stands as he continues to push for no new taxes or fees in Vermont.

“My vote prevents a default property tax increase on hardworking Vermonters,” he said. “My entire tenure at the legislature, Vermonters have been telling me that they can’t afford to pay higher property taxes.”

The GOP caucus had just 51 members on the floor for the day’s vote, so there was little room for deviation from party lines. In the end, the Democrat majority party fell three votes short of the two-thirds necessary for an override.

The governor and Republicans have maintained that any tax rate increase is unnecessary this year because Vermont has received $55 million in unexpected revenue. Scott issued a statement shortly after the vote.

“Vermonters elected me based on my vision to grow our economy, make Vermont more affordable and protect the most vulnerable,” he said. “This came with a clear commitment to fiscal responsibility that gives Vermonters a break from years of constant tax increases that contribute to the crisis of affordability many families and businesses face.

“The vote to sustain my veto of H.13 [the budget bill] today reflects a steadfast commitment from many in the Legislature to provide Vermonters with this relief after years of tax increases, and I thank them for their work.”

Rep. Brian Savage, R-Swanton, told True North there is already another proposal on the table from Republicans.

“We have put a proposal forward that would basically be the same bill, but it would remove provisions about defaulting back to the statutory rate on the taxes,” he said.

If budget bill H.13 had passed, it would have resulted in a default 5.5-cent rise in the non-residential property tax rate. Scott has made it a cornerstone of his campaign and governorship that there should be no new taxes or fees under his watch.

Nonetheless, Savage stressed that both sides are going to have to come back to the table.

In addition to Turner, several lawmakers spoke on the floor to explain their vote.

“A government shutdown would be bad for Vermont and for Vermonters,” he said. “It is disconcerting to see that using this threat in place of good faith in negotiating and a willingness to compromise, and [to use] strategies that we see used in Washington D.C.”

Rep. Anne Donahue, R-Northfield, took issue with the stoking of fears over a potential government shutdown.

“Yelling fire in a crowded theater is not protected speech if there is no fire because people can get trampled and hurt,” she said. “There is no fire here if we address the underlying tax dispute instead of diverting the focus into a new debate on what the default tax rate should be if there’s no compromise reached by July 1.”

As the potential for a shutdown becomes greater, other state officials have begun weighing in.

“I can tell you, from the perspective of our agency and its four divisions, there are real consequences if there is not a budget in place to ensure the continuing operations of government services,” Secretary of State Jim Condos said in a statement. “I am certain that this is true across all facets of state government.”

Lt. Gov. David Zuckerman also released a statement expressing his frustration at the governor’s decision to veto the budget twice.

“It is normal for there to be disagreements between governors and the legislature, but this is the first time the governor hasn’t been present to negotiate,” Zuckerman wrote in his newsletter to constituents. “In an addition to the budget, the governor set a record by vetoing 13 bills this year.”

The Senate is meeting Thursday and the House is meeting on Friday, but it is not clear yet if either body will continue on the budget this week.

“We do have other smaller pieces of legislation that are still being discussed,” Savage said. “As far as a new budget being presented as we have proposed, I’m not sure when that’s going to be produced, but I’m sure we’re going to be back here several days next week.”