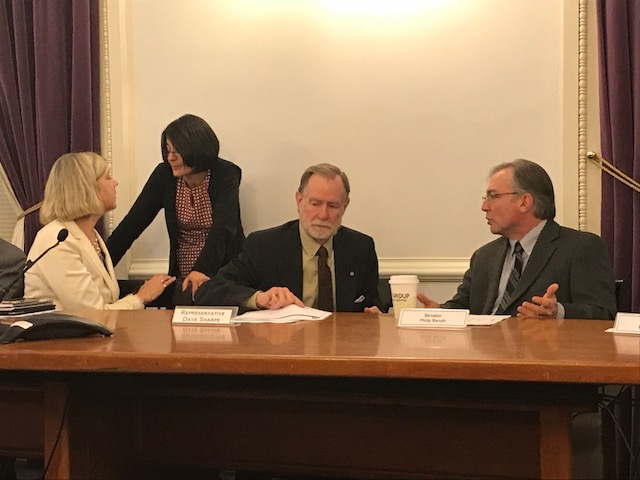 EDUCATION SAVINGS: Rep. David Sharpe, D-Bristol, (center) has been at the forefront of efforts to reconfigure how special education is paid for in Vermont.

MONTPELIER, Vt. – Gov. Phil Scott has signed H.897 that reforms the special education funding formula, moving away from a pay-per-play formula towards a census-based grant formula. But how Scott wants to use the savings has some Democrat lawmakers in a tizzy.

The estimated savings from the reform could be in the tens of millions, and the governor hopes to capitalize on the excess funds for his long-term budget plans. However, House Education Committee Chair Rep. David Sharpe, D-Bristol, says he’d prefer the governor keep his hands off the cash.

“Any savings realized at the local level will be used responsibly by the local school boards and local voters to either lower the tax rate or provide services that they have not been able to deal with in the past,” Sharpe said to True North.

“For example, to dealing with some of the opiate crisis that’s entering our schools right now in kindergarten and first and second grade, or to put a roof on a building. I believe that local school boards and local taxpayers make better decisions about how to spend money than Montpelier does.”

Scott in a press release offered some numbers on the savings his administration expects.

“Our analysts estimate this new law will save about $2 million in fiscal year 2020 and increase to about $34 million in savings in fiscal year 2024,” he said. “This gets us one step closer to a comprehensive plan that improves equity in our education system by better managing the $1.6 billion we commit each year to educate about 76,000 students.”

Scott called the bill bipartisan legislation that improves the equity and efficiency of service.

“I appreciate the Legislature’s collaboration with my Agency of Education, and others, to implement the recommendations brought forward by Dr. Kolbe [UVM professor Dr. Tammy Kolbe] and her research team at the University of Vermont,” Scott said. “[It’s] designed to improve our effectiveness in providing these important services for kids.”

The UVM study found that the state was paying about two-fold the national average per special education student. Kolbe said she’s pleased with the resulting bill.

“It provides educators with the flexibility they need to implement innovative practices to better serve students with a range of learning needs, while at the same time bringing predictability to state and local education spending,” she said.

According to Kolbe’s study, the national average spending for an Individualized Education Program (IEP) for FY2016 was $10,138. That year Vermont spent $21,840.

One category of special education for Vermont which stands out from the national average is students with emotional disturbances. Vermont is at 17.6 percent versus 5.9 percent for the nation.

One of the primary obstacles in forming this bill was applying the census-based grant formula for independent schools, which currently use a pay-per-service formula. The bill includes a four-year period for these schools to integrate the new formula.

The bill loosens the demands that independent schools hire often expensive and hard-to-find special education personnel for students with special needs. If the school can demonstrate an honest effort was made towards finding the appropriate staff to no avail, then the local education Agency, or LEA, must find another school for that student to attend.

“This is a critical step forward in protecting some of our most vulnerable students,” she said. “I am grateful to the General Assembly for working with the Agency to bring this bill to fruition.”

“The committee acknowledged that forcing SPED open enrollment on all independent schools would increase costs and further exacerbates the shortage of SPED professionals but agreed with the Agency of Education’s assertion that this was a civil rights issue and couldn’t be ignored.”