SOUTH ROYALTON, Vt. — A potential overhaul of Act 250 has many Vermonters questioning the merits, failures and likely future changes of the state’s watershed land-use law. Last week, an all-day event was held to find balance for Vermont’s communities, economy and environment. 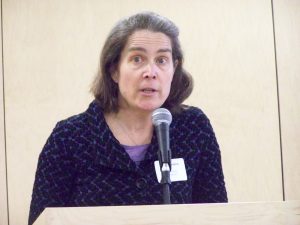 Democrat Rep. Amy Sheldon of Middlebury: “A lot of people are confused about Act 250. What is the appetite for more environmental protection? Is there a role for [more] land-use planning and regulation?”

Act 250, seen as either the “great green hope” of environmentalists and central planners or the bane of businesspeople and developers, will celebrate its 50th anniversary in 2020. But just two years ahead of the law’s half-century mark, legislators, legal professionals, environmentalists and business leaders are looking ahead and wondering about the next 50 years.

On May 24, Vermont Law School joined the nonprofit Vermont Natural Resources Council (VNRC), and others, in presenting a day-long campus conference titled “Act 250: What’s Next?”

The idea behind the conference was to review the law’s performance to date, as well as to break out into discussion groups to consider new opportunities for Act 250 that are not its current focus, such as climate change and forest habitat fragmentation.

State Rep. Amy Sheldon, D-Middlebury, chair of the Vermont Commission on Act 250, opened last week’s conference by outlining the mission of the new commission formed in 2017 by the legislative bill H.47. Sheldon explained that the six-person commission must report its findings and recommendations by Dec.15, 2018.

She was followed by former state Sen. Diane Snelling, now chair of the Vermont Natural Resources Board that administers Act 250. Snelling presented an overview of Act 250, stating that the law “helps Vermont retain its rural character by preserving the natural environment and supporting the state’s environmental diversity.”

As Sheldon explained, Act 250 gets a lot of attention in Montpelier and beyond because it is the most amended statute in Vermont, having been amended every two years since its inception in 1970.

The public output phase of the commission, set to begin June 27, will involve six public meetings around the state, and will include online and printed surveys to get feedback from as many Vermonters as will participate.

“A lot of people are confused about Act 250,” Sheldon said. ” … What is the appetite for more environmental protection? Is there a role for [more] land-use planning and regulation?”

Sheldon noted that report writing will begin in September and will potentially recommend changes to Act 250, such as climate change provisions. Sheldon’s own views are in line with many leading environmentalists: She was named a “climate champion” in 2017 by the social-justice activist group Vermont Businesses for Social Responsibility.

Among the conference panel discussions held at Vermont Law School included one on the important business perspective.

“Where should we conserve land and where should we live and work?” said Beyer. “Let’s face it, we all feel fuzzy when we pass a sign that reads ‘this land is preserved forever’ [under Act 250]. At its core Act 250 answers these questions, but on a project-by-project basis. … It does not allow for a broader vision. … What is the appropriate role of Act 250 today?” 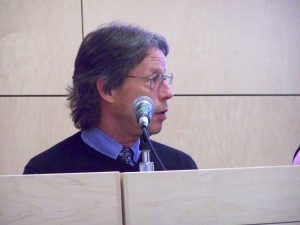 Mark Delaney of Smugglers Notch: “I miss the simple days when an [Act 250] application was only a couple of pages long … and the fees were a lot less.”

Delaney, who has been working with Act 250 since 1987, said he missed “the simple days when an [Act 250] application was only a couple of pages long.” He offered advice for how applicants could get better assurance in the approval process.

“I think Act 250 should be the first step, not the last step, on the project’s path in the regulatory process,” Delaney said. “The applicant should be able to present conceptual plans and enough evidence to support positive findings for select or all criteria. The parties should be on the record and the big picture issues settled early … then the ANR permits.”

Morrissey said she has worked with many business and housing owners who have felt the heavy hand of Act 250. She noted that the original intention of the land-use law was to protect the environment and promote the economy. She doesn’t see a strong connection between the two today.

“The complexity of any law is that the more time passes from when it’s enacted to the current time, the greater the distance from the original intention of the law,” Morrissey said. “My hope is that this collaboration yields results in one, two, three or four small, but bold and courageous outcomes.”

She added she “would like to see every public employee who issues permits to be supportive” of a more efficient process. “Act 250 is described as also promoting economic prosperity — we should do this, along with environmental protection, so that every one can enjoy the state. How about promoting Vermont’s environment and the economy?” 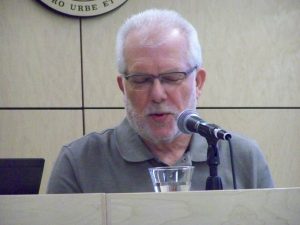 Architect Bob Duncan on Act 250: “It was the best of times, it was the worst of times.”

“In my mind, this quote epitomizes Act 250. It overlaps and is redundant with local, regional planning. It is unnecessarily complex. In Dickensian terms, the good thing about Act 250 is that it slows down development, and the bad thing about Act 250 is that is slows down development. How do we reconcile the good and the bad? How do we improve the process of development and support our vision of the future?”

“Yes, a lot of things change over time … but for me this is a good visual showing that things have changed to a point that it’s harder to go through and prepare for the process,” Duncan said.

While the Act 250 conference wrapped up without a specific reform agenda, there were strong proponents for broadening the law’s jurisdiction over climate control and forest wildlife habitat matters in the future — yet no workable plans appeared to be in the offing. There appeared to be no strong push to revive Vermont’s defunct state land use plan either.

The breakout sessions made suggestions which, like the upcoming public meetings, will be dovetailed into the Vermont Commission on Act 250 report due out later this year.

Former state senator and Harvard University fellow John McClaughry, founder of the Ethan Allen Institute, is the only still-active alumnus of the 1970 Vermont Legislature who debated and voted for Act 250.

“A year ago I volunteered to the legislative commission to provide some illumination about the creation and early years of, and lessons to be learned from, Act 250 — they were unanimously not interested,” McClaughry told True North Reports.

“As I explained in a letter to Rep. Sheldon, in their exuberant enthusiasm for controlling other people’s property in the name of the greater good, the VNRC and its allies made a number of serious mistakes following Act 250. The result was defeat of, and eventually repeal of, the authorization for a state land-use plan. Now another generation of VNRC land controllers … are eager to start down the same road again.”

2 thoughts on “Act 250 conference kicks off discussion of land-use law’s past, future”