By Delphine Luneau | The Center Square

Democrats in the U.S. House took steps Monday to once again try to remove President Donald Trump from office, introducing a single article of impeachment and a resolution that would ask Vice President Mike Pence to invoke the 25th Amendment, thereby displacing Trump and assuming power over the nation’s executive branch.

The resolution, seen as a procedural step before the House moves to consider impeachment, immediately drew an objection from House Republicans. The chamber then went into recess until Tuesday, and it’s expected the 25th Amendment resolution will go before the full House for a vote later this week. 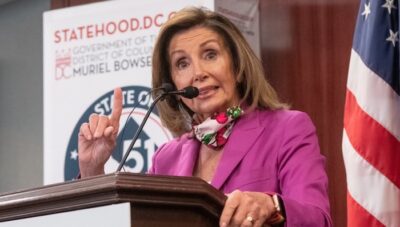 Reports suggest Pence is not inclined to invoke the 25th Amendment, even if the resolution ultimately passes. House Speaker Nancy Pelosi has said in that scenario, the House would move forward with impeaching the president over Wednesday’s events that led to the U.S. Capitol being breached by crowds of Trump supporters.

An impeachment vote is seen as likely to succeed in the Democrat-controlled House, which would make Trump the first president in U.S. history to be impeached twice. Less certain is the outcome in the Senate, which is controlled by Republicans but due to change hands. Even after Democrats take control – when Jon Ossoff and Raphael Warnock, the winners of last week’s Georgia runoffs, are sworn in – it’s considered unlikely the supermajority needed to actually remove the president would materialize.

Tonight, in the first interview with Speaker of the House Nancy Pelosi since a mob smashed its way through the Capitol, Speaker Pelosi tells Lesley Stahl one motivation for impeaching POTUS is to assure he never runs for the presidency again. https://t.co/GB0n5UOLgK pic.twitter.com/aU6dCSO2BQ

The Capitol incursion caused five deaths and led to members of Congress fleeing the House and Senate chambers – interrupting the process of recording the results of the Nov. 3 presidential election. Critics of Trump argue his remarks at a rally earlier in the day sparked the events that took place at the Capitol.

If the 25th Amendment was invoked, Pence would take over as acting president. Trump would be given an opportunity after several days to challenge the assertion he was incapable of performing his duties; if Pence again invoked the clause, the matter would be settled by Congress.

With President-elect Joe Biden due to be sworn in Jan. 20, some observers have questioned why Congress is spending its time trying to remove a president who will leave office in a little more than a week. Others have pointed to continued chatter online, by those who feel the Nov. 3 election was decided fraudulently, seeking to interfere with the inauguration ceremony and prevent Biden from becoming president. Still, others have expressed concern Trump might misuse his pardon powers on his own behalf, to benefit his close friends and allies, or even on behalf of the individuals who stormed the Capitol.

Trump was impeached in December 2019 over allegations he improperly sought to pressure the Ukrainian president to investigate Biden. The Senate voted in February 2020 to acquit Trump without hearing any additional witnesses.