As cases of the coronavirus surge across the nation, messaging from top media outlets and Vermont’s own health commissioner has shifted dramatically —  case counts don’t really matter, and COVID should now be thought of more like routine seasonal flu.

In an interview last week with VTDigger journalist David Goodman, state Health Commissioner Mark Levine made a number of statements that represent a radical departure from the Health Department’s approach to the coronavirus over the past two years. 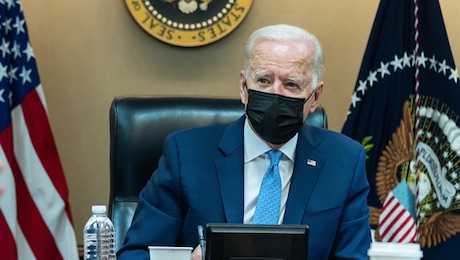 A new CNBC/Change poll shows President Joe Biden’s disapproval rating hit a record high in December in part due to his handling of the pandemic.

The commissioner said people who have already been vaccinated are getting infected, but the Omicron variant should change how the state and nation think of COVID going forward.

“We’re finding with Omicron that this is a milder virus — if we believe everything coming from South Africa, the U.K., and the early experience in our country,” he said. “The cases are milder. They’re involving people who have been vaccinated.”

In a stunning reversal from past speeches and interviews, Levine then said Vermonters should “think about what the flu has been like every year since they were born.”

We don’t enter the flu season with tremendous fear and trepidation. We don’t disrupt our lives in remarkable ways. We hopefully get vaccinated, and we get through the flu season. Some of us may get a mild flu-like illness. Some who aren’t vaccinated may get a more severe illness. And there are some who are very vulnerable — that, even with vaccine, may get a severe illness. But we kind of see that happen year after year after year. And we’ve adapted to living our lives knowing that every year, there’s going to be a flu season. … So that’s how I see the best-case scenario for how Omicron will actually get through us, and then what our future with the SARS-CoV-2 virus will be like.

A dramatic shift in messaging on COVID is also taking place among mainstream media outlets, from CNN to MSNBC, even as a new poll shows President Joe Biden’s disapproval rating hit a record high in December due in part to his handling of the pandemic. The U.S. is reporting over 1 million new daily COVID cases, and locally Vermont hit a record one-day case count of 1,727 on Monday. On Tuesday, a writer for AP News asked, “Why are so many vaccinated people getting COVID-19 lately?”

In December, posting on his Twitter account, CNN’s Brian Stelter advocated for keeping kids in school despite skyrocketing case counts. “Shouldn’t we be doing more to protect children by letting them live normal lives? Or, to pose the Q another way, are we really going to close schools again and let kids suffer even more?” he tweeted.

We collectively took action to protect the elderly from Covid. Now, shouldn't we be doing more to protect children by letting them live normal lives? Or, to pose the Q another way, are we really going to close schools again and let kids suffer even more? pic.twitter.com/FO1AjzneGh

One of Stelter’s colleagues, Chris Cillizza, even took aim at the efficacy of COVID-19 shots.

“Because the reality is — and has always been even if I didn’t realize it — that the vaccines don’t, really, prevent you from getting the virus. Or, at least, they don’t guarantee it won’t happen,” he wrote on Twitter.

Over at MSNBC, political talk show host Chris Hayes on Dec. 29 tweeted that “the risk went from something we hadn’t really dealt with before in our lifetimes, to something that looks more like the flu. The flu can still be dangerous — but we do not reorient our lives around the flu.”

.@chrislhayes on the weird reality for vaccinated folks amid omicron wave:

The risk went from something we hadn’t really dealt with before in our lifetimes, to something that looks more like the flu. The flu can still be dangerous—but we do not reorient our lives around the flu. pic.twitter.com/4K5qNOplpW

The Washington Post’s Jennifer Rubin said that cases being continually reported in corporate media are often non-threatening to regular Americans: “As we recognize that covid-19 is not a deadly or even severe disease for the vast majority of responsible Americans, we can stop agonizing over ‘cases’ and focus on those who are hospitalized or at risk of dying.”

As we recognize that covid-19 is not a deadly or even severe disease for the vast majority of responsible Americans, we can stop agonizing over “cases” and focus on those who are hospitalized or at risk of dying.https://t.co/S4OQD7R58u

Nate Ashworth, founder and editor-in-chief of Election Central, writes that Americans are turning politically against both the increasingly unpopular Biden Administration and the Democratic Party.

“Clearly, former President Donald Trump’s message was always to prioritize the freedom of citizens and respect the right to work, to pray in places of worship, and not to neglect family and traditional values. On the contrary, Democratic governors and President Joe Biden, were prophets of confinement, isolation, and worshipped the seal of approval and the long-awaited vaccine as if they were the ‘saviors’ of the crisis,” Ashworth wrote.

David Rutz, a senior editor for Fox News, noted the change in tone coming from prominent voices in the left-wing dominated media.

“After nearly two years of advocating or defending various lockdowns and mandates in an effort to end the virus for good, more journalists appear to be accepting that even with effective vaccines that diminish its impact, COVID-19 is an endemic disease that can’t be eradicated at any point in the near future,” he wrote.

According to a poll conducted by the Trafalgar Group, Americans are turning against COVID-related shutdowns and mandates.

“In total, 69.4 percent of those polled believe there should be no increased mandates and restrictions in order to combat Omicron,” Sophie Mann wrote at JustTheNews.com. “When broken down, that figure reflects 21.4 percent of those surveyed who believe the variant is ‘not a serious health risk,’ and 33.1 percent who believe that ‘regardless of risk, increased mandates and restrictions are not needed.'”