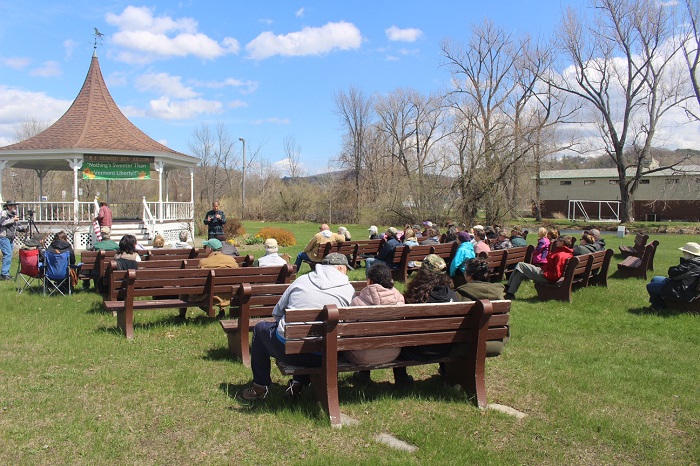 NEWPORT, Vt. — About 75 Vermonters turned out on a chilly Sunday afternoon at the Gardner Park Bandstand to hear liberty-minded Vermonters speak out against COVID-19 lockdowns, media censorship and other government overreaches.

The event, hosted by Vermont Liberty Network, was held to discuss the many ways in which cherished constitutional rights have been trampled by state governments.

Former GOP gubernatorial candidate John Klar, the chief organizer of the gathering, said the public events — this being one of four scheduled for May — are about letting people know there’s an alternative to government overreach.

“It’s about [having] a place for everybody to come. Because in case you haven’t noticed, the Progressives are very well organized,” he said. 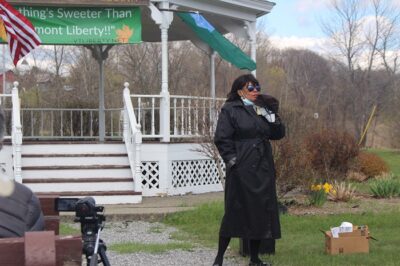 Alice Flanders addresses the audience about race and claims of racism in Vermont. “Vermont is not a racist state,” she said.

Flanders, an African American woman who ran for a House seat in 2020, criticized social justice movements for their continual claims that Vermont is a racist state.

“Vermont is not a racist state,” she said. “Don’t you ever let anybody brainwash you or put the wool over your eyes or your children to have them think this is a racist state.”

She took aim at Xusana Davis, Vermont’s first executive director of racial equity. Davis is the driving force behind a slew of racial-justice initiatives moving through the Statehouse, including prioritizing land ownership by race.

“They didn’t come looking for me, but they should have — why wouldn’t you?” Flanders said. ” … I’m qualified to talk to you about issues related to these challenges more so than the woman who is currently sitting there giving advice to the governor.”

Flanders said accusations about racism are being used to divide Vermonters. “This is a tactic that they are using to keep us down, to put us in our place,” she said.

Strong, during her speech, said one of her constituents lost a child after getting the flu shot during her first year in office, prompting the lawmaker to take a stand against coerced vaccinations. Strong has introduced three bills aimed at preserving Vermonters’ right to make their own medical decisions.

“We will not be coerced or made to feel guilty,” she said. “I’m not taking the vaccine and I refuse to do it. It’s an experiment. Maybe next year they won’t let me in the Statehouse building.”

One of the bills, H.283, preserves “an individual’s rights to bodily autonomy.” It states that no coercion can be allowed when it comes to choosing for or against vaccination.

Another bill, H.322, aims to strengthen exemptions from school-required vaccinations.

“[Some parents] may not want to give their children 74 vaccinations before the age of 16,” she said.

Perry, at her turn to speak, shared excerpts from “Science, Politics, and COVID” an article written by Scott Atlas, a senior fellow of health care policy for the Hoover Institution.

“To determine the best path forward, shouldn’t policymakers objectively consider the impact both of the virus and of anti-virus policies to date?” she read from the article. “… In the case of COVID, it requires taking into account the fact that lockdowns and other significant restrictions on individuals have been extraordinarily harmful — even deadly — especially for the working class and the poor.”

“People are being doxxed, their employers are being attacked, their careers are being destroyed all for the slightest comment on Facebook months ago because they might have liked something liberty-oriented,” Klar said.

Klar noted the crowds for such events are growing, and he encouraged all liberty-minded residents to attend May’s scheduled gatherings.

“We need to get our act together … or come together on that thing that we can agree on, which is called the Constitution,” he said.